11 year old Lil Shan Shan has just released the video for her first single, “Sweet Tooth” which is produced by will.i.am of the iconic Black Eyed Peas, and coach on The Voice Kids UK.

Ashanti “Lil Shan Shan” Johnson-Baiden caught the attention of will.i.am when she auditioned on The Voice Kids UK last month with her rendition of the hit song “Supersonic“, a rap originally released in 1987 by all female hip hop group JJ Fad. Her performance garnered all four coaches to turn their chairs, the first of which was will.i.am with whom Lil Shan Shan chose as her coach.

She was the only rapper in the competition and wrote her own music to get into the Voice Kids UK finals.  “Sweet Tooth” was the song that caught will.i.am’s attention, who was so impressed by her talent he produced the single and created the video.

Lil Shan Shan is from London and dreams of becoming a famous rapper.  She hones her skills by practicing in front of customers in her uncle’s barbershop. You can learn more about the rapper, model, and motivational speaker on her Instagram and Twitter. 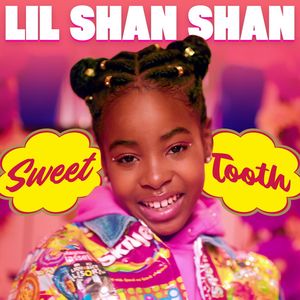