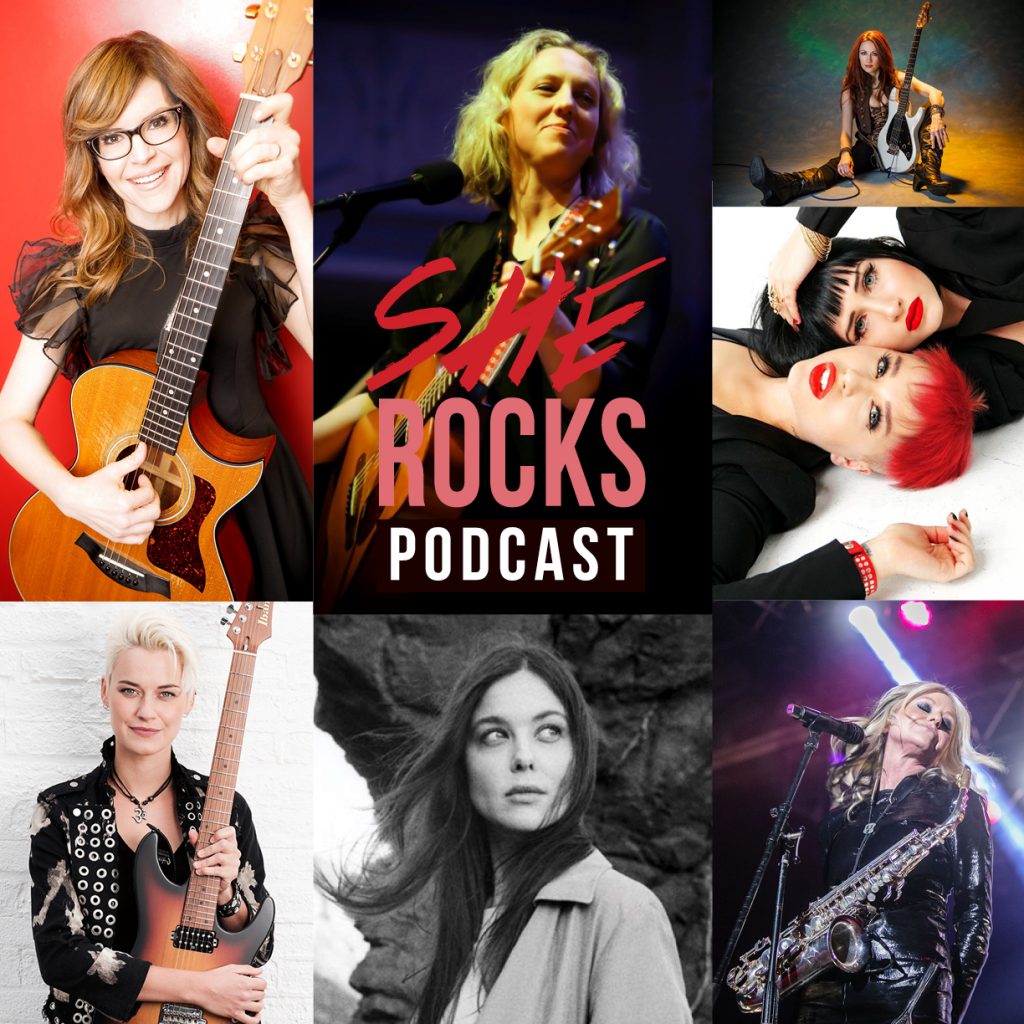 The She Rocks Podcast presents conversations with extraordinary women from all walks of the music industry, from top-tier performers to behind-the-scenes heroes. Sharing insights, tips, gear rundowns and so much more, the She Rocks Podcast
gets in-depth and personal about all the issues that matter.

The show is hosted by Laura B. Whitmore, founder of the Women’s
International Music Network and the She Rocks Awards, journalist for Parade.com
and music industry marketer. A champion for women in music, Whitmore has
interviewed hundreds of musicians from every spectrum of the industry.

Subscribe anywhere you get podcasts! Don’t forget to rate and review.

Episode 18: Leigh Nash – Singer/Songwriter
Perhaps best known for her role as the lead vocalist in Sixpence None the Richer, whose hit “Kiss Me” pushed them into the global spotlight, singer/songwriter Leigh Nash is a versatile, talented artist. Her new EP, called ‘Get Happy,’ showcases her take on some of her own material, plus the classic title song, inspired by the recent film on Judy Garland. Here we sat down to chat about her new music and what she’s up to now. Find out more at https://www.leighnash.net/.

Episode 17: Nikki O’Neill – Soul, Blues & Americana Guitarist and Vocalist
Guitarist and singer/songwriter Nikki O’Neill is firmly at home in the soul, rhythm & blues, gospel and Americana world. Her new album, ‘World is Waiting’ is a showcase for her tasty guitar playing and raw and rootsy performance style. Here we chatted with Nikki about her recording experience in Memphis and much more. Find out more about her at https://nikkioneill.com/.

Episode 16: Imogen Clark – Australian Singer/Songwriter
Australian artist Imogen Clark has a new EP coming out later this year, ‘The Making of Me.’ Marrying vulnerability with a bold vision, this talented musician was lucky enough to have a chance to finish the project in L.A., and it’s a beauty. Here we connected with her from down under to chat about her musical influences, this new music journey and so much more. Find out more at https://www.imogenclark.com.au/.

Episode 15: Cherie Currie – Vocalist and Rock Icon
Cherie Currie is perhaps best known as the lead vocalist of the iconic pioneering band, The Runaways. But today we’re talking to her about her brand new album, ‘Blvds of Splendor.’ Featuring guest collaborations with Billy Corgan of Smashing Pumpkins, Slash and Duff from Guns N’ Roses, as well as Juliette Lewis, Brody Dalle, The Veronicas and drummer Matt Sorum (Guns N’ Roses, Velvet Revolver), who also produced the set, the album brings Currie back to her roots and has her on top of her game with a collection of true rock ‘n’ roll gems. Find out more at https://www.cheriecurrie.com.

Episode 14: Mixi – Frontwoman for Stitched Up Heart
Alt-rock band Stitched Up Heart is headed by its intriguing front woman, Mixi. They’ve recently released their sophomore album, ‘Darkness’, and it’s a keeper! With over 20 million worldwide streams Mixi and the band have struck a chord with killer heavy hitting tracks and passionate, masterful vocals. We checked in with Mixi about music, her love of fostering cats, tattoos (of which she has many) and much more! Find out more at www.stitchedupheart.org.

Episode 13: Sara Evans – Hit Country Artist
2020 marks the 20th anniversary of the release of Sara Evans’ impactful, autobiographical and empowering album, ‘Born To Fly’. While she had scored several hits prior to this project, the title track catapulted her to the top of the country music scene. Now releasing May 8, her new album — ‘Copy That’ — highlights 13 songs spanning six decades and the tracks she’s selected chronicle her influences and pivotal songs that shaped her life and career. Here we sat down with Sara to chat about her new music and to reflect on a her stellar accomplishments. Find out more at https://www.saraevans.com/.

Episode 12: Tiffany – Pop/Rock Sensation and Cooking Club Host
’80s pop star Tiffany is probably best known for her breakout hit “I Think We’re Alone Now,” but this dynamic musician has been making music non-stop for decades. Now she’s poised to release two new projects, an acoustic EP plus a new rockin’ album. She’s also about to launch her new food club, ‘Let’s Food With Tiffany.’ We caught up with this energetic performer and it was a blast! Find out more at tiffanytunes.com.

Episode 11: Lari Basilio – Guitarist
Brazilian guitarist Lari Basilio has made a name for herself as a brilliant and lyrical player. Lari won the instrumental category of the Samsung E-Festival in 2014. She has opened for guitar clinics by Paul Gilbert and Andy Timmons and appeared at the Malibu Guitar Festival in 2017. She was invited by Joe Satriani to be part of the G4 Experience 2019, being the first female guitar player to join the event. Here we caught up with Lari at the 2020 NAMM Show to find out what’s next for her! Find out more about Lari at laribasilio.com.

Episode 10: Command Sisters – Pop/Rock Singer/Songwriters
We caught up with the Command Sisters in Toronto to chat about their new music, getting signed to a major label, and so much more. Sarah and Charlotte Command are a talented pop/rock duo whose songwriting and performance chops are inspiring. The pair is getting ready for their first major release in 2020. You can catch them at instagram.com/commandsisters and on their site: commandsisters.com.

Episode 9: Yasi Hofer – Guitarist
German guitarist Yasi Hofer started out sharing her performances of Steve Vai’s music on Youtube. Her passion and skill developed to the point where even Vai himself sat up and took notice, inviting her to perform with him on stage. Today Yasi writes, records and performs her own music with the skill and finesse of a true artist. Here we caught up with Yasi at the NAMM show to talk about her third album, ‘Freedom’ and much more. Find out more about her at yasihofer.com.

Episode 8: SHELLY PEIKEN – Hit Songwriter and Musician
Hit songwriter Shelly Peiken has penned top tracks that include Christina Aguilera’s “What a Girl Wants” and “Come on Over Baby,” Meredith Brooks’ “Bitch,” Brandy‘s “Almost Doesn’t Count,” The Pretenders’ “Human,” and so many more. The audio version of her book, Confessions of a Serial Songwriter was nominated for a GRAMMY. Now she has created her own version of many of her top songs, plus recordings of other original favorites and compiled them into her own album, 2.0…. Here we sit down with Peiken to discuss her new project, what it’s like to figure out ‘what a girl wants’ in her 50’s, and so much more. Check out new music and find out more at www.shellypeiken.com.

Episode 7: ALI HANDAL – Guitarist, Singer/Songwriter
Best known as one of the few women in rock who can solo with the electric fury and fluid grace of a Hendrix, Slash or Page, Ali Handal is also a multi-award winning songwriter and a uniquely gifted singer. Her songs have been heard in countless movies and TV shows, and her performances have taken her from L.A. to Australia, Japan and beyond; she’s sung on a Neil Young album, performed at Neverland Ranch, danced with Janet Jackson, written with Paul Williams, had her hands filmed playing guitar in a Playboy video, and even demonstrated guitars several times on “The Price Is Right.” She’s a savvy Indie marketer too. Here we talk about her music, tips for selling more music, and so much more.

Episode 6: BAHARI – Alternative Pop Duo
Alternative pop duo Bahari is comprised of singer/bassist Natalia Panzarella and singer/keyboardist Ruby Carr. Known for their rich harmonies, they have previously toured with Selena Gomez and Birdy. They have also collaborated with artists such as ILLENIUM, ZEDD & Grey. Their recent hit single “Savage” has enjoyed over 100 million streams/views and is certified Gold status by RIAA. Here we caught up with them in New York City to chat about their music and find out the story behind Bahari.

Episode 5: ANA EGGE – Singer/Songwriter and Guitarist
Singer/Songwriter and guitarist Ana Egge released a gorgeous new album, Is It The Kiss, in 2019, and we came across her beautiful song “We Are One,” which she recorded with a choir in Brooklyn to produce this inspiring video. We met up with Egge at StorySound Records’ studios in New York City to talk about music, spirituality and so much more. Check out her inspiring story here and visit her at www.anaegge.com.

Episode 4: LISA LOEB – GRAMMY Award-winning Singer/Songwriter
Lisa Loeb may be most famous for her hit, “Stay (I Missed You)”, but her music has made an impact on generations. Loeb’s body of work includes extraordinarily thoughtful storytelling, cinematic musical landscapes, as well as rock songs done with her band, plus stripped-down acoustic numbers. A trailblazing independent artist, Loeb was the first pop musician to have a Number 1 single in “Stay” while not signed to a recording contract.

The beloved Dallas, Texas-raised singer/songwriter has transfixed fans and audiences with more than a dozen diverse yet cohesive studio albums for kids and adults alike, including 1997’s Grammy-nominated Firecracker and 2017’s Lullaby Girl, plus her Grammy-winning 2016 album, Feel What You Feel. Her records have charted in numerous countries worldwide, and Loeb has enjoyed several hit singles in the United States, including “Do You Sleep” and “I Do.” To date, two of her albums are certified Gold, and her many accolades include a Brit Award, a Grammy, and nominations for the MTV and Billboard Music Awards.

Here we chat with Lisa about her new album, A Simple Trick to Happiness, releasing on February 28.

Episode 3: GRETCHEN MENN – Guitarist
Equally at home with rock, jazz, folk, classical and more, guitarist Gretchen Menn represents a new breed of versatile guitarists willing to explore every aspect of their craft. A key member of the all-female Led Zeppelin tribute band Zepparella, Gretchen also plays in a trio, and as a solo artist. Here we caught up on what’s happening in Gretchen’s world! Find out more about her at GretchenMenn.com.

Episode 2: ANNA NALICK – Singer/Songwriter
Anna Nalick hit it big with her song “Breathe” when she was only 19. What started out as a fairy tale path to stardom turned into a roller coaster ride of creative ups, and personal and financial disappointments. Here we dig deep with Anna to talk about her story, insights from the road and her continued creativity and growth. Find out more about her at AnnaNalick.com.

Episode 1: MINDI ABAIR – Saxophone, vocals, singer/songwriter
GRAMMY-nominated saxophone player and singer/songwriter Mindi Abair has played with a slew of greats and commands audiences around the world as she tours with her band, The Boneshakers. She’s transitioned from straight on jazz to blues, and has impressive vocal and songwriting chops, too. Here we talk about what’s next for Mindi and much more. Find out more about her at mindiabair.com and visit reservetastings.com to find out about her wine and music club.

Want to sponsor the She Rocks Podcast? Contact us here.