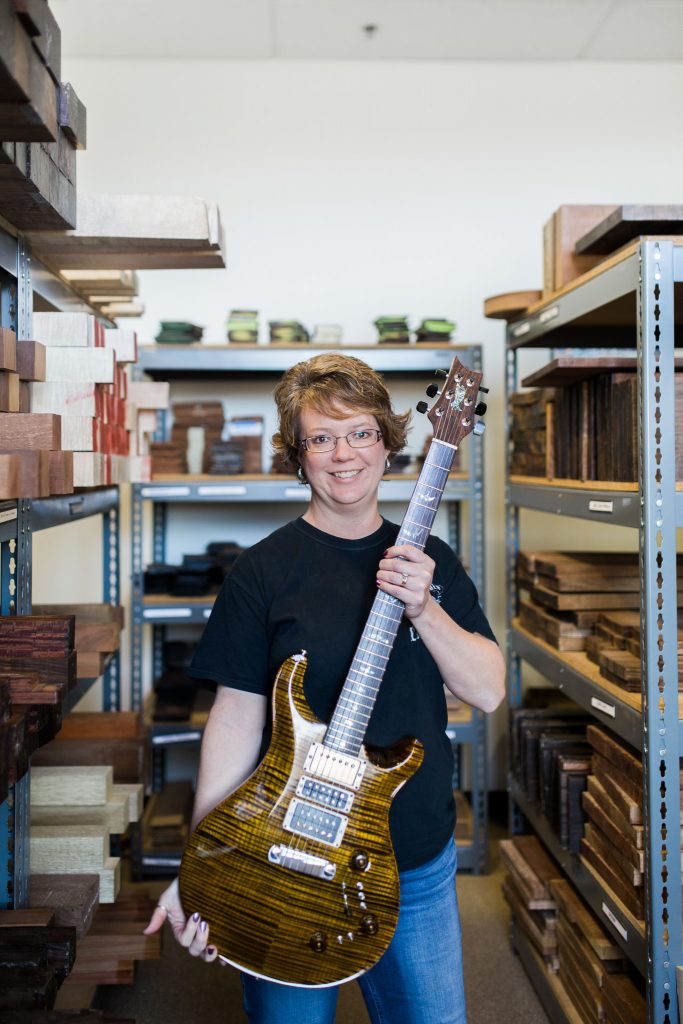 Bev Fowler has become a well known name in M.I. for her relentless work in artist relations and events for Paul Reed Smith Guitars.

On any given day, you may find her on the phone with artists like Carlos Santana and John Mayer; performing emergency tasks like overnighting equipment to Mark Tremonti, Neal Schon or Zach Myers; or assisting with the preparations and  event strategies for trade shows like NAMM, Experience PRS, and more.

Her hard work doesn’t stop there. Fowler is also a philanthropist, and has helped raise 5 million dollars for the Living with Cancer Resource Program at the John Hopkins Kimmel Cancer Center in Maryland through PRS’ events and partnership with that institution. Spearheading it all? None other than Bev Fowler.

WiMN: Do you play an instrument?

BF: Not currently. Growing up, I played the piano but unfortunately gave it up in my teenage years. I have always wanted to learn to play the guitar but haven’t managed to find the time to take lessons.

WiMN: What is your first recollection of being involved with music?

BF: Music was a big part of my life from my early childhood years. My dad had an extensive record collection and wide array of different genres. I always credit my dad for my ultimate love and appreciation for music as he exposed me to many different types of music at a young age.

WiMN: When and where did you enter the M.I. workforce?

BF: At the age of 17, I was offered a part time job by an old family friend. I was a senior in high school with hopes of pursuing a college degree in psychology. I began working for a manufacturer’s rep firm specializing in Pro Audio & Sound Contracting as an office assistant but quickly worked my way up into an “inside sales position.” I eventually got my psychology degree but decided to pursue my career in the music industry instead. Through my 12 years of working as a sales rep, I had the privilege of representing pro audio brands such as Harman Professional, Sony Pro Audio and Rane Corporation.

WiMN: You’re currently the Director of Artist Relations at PRS. Did you hold any other position at that company before?

BF: Yes, I actually started my tenure at PRS as the Executive Assistant to the President. This position exposed me to all facets of the business including manufacturing processes, sales, marketing and accounting. As a result, I had many opportunities to interact with our artist endorsers and began establishing working relationships with many of them. I really enjoyed that aspect of my job and found myself wanting to work with the artists more and more. Eventually, I was presented with the opportunity to join and support the Artist Relations team.

WiMN: Describe a day in the life of Bev Fowler.

BF: Ha Ha! Every day is different! I often describe my job as a tornado and a constant whirlwind of things to do. Most of my day is spent in “reactive mode” handling various needs and requests from artists. Flexibility and patience is key. I work very closely with Paul Smith on the business matters as they pertain to AR and collaborate regularly with our marketing team in effort to support and promote our endorsers.

WiMN: What does it take for a musician to be a PRS artist?

BF: First and foremost, a genuine desire to be part of the PRS family. There are many factors that we take into consideration for an artist endorsement and they vary on a case by case basis.  We really pride ourselves on having a good, strong working relationship with the artists we work with and there’s a lot of give and take. We provide tools to the artist to do their job and in exchange we rely on the artist to influence the customer while also giving us brand exposure.

WiMN: Who are some artists that you have regular interactions with?

WiMN: What are some challenges you’ve faced for being a woman in a male-dominated field, and how do you cope with them?

BF: Thinking back through the years I haven’t really experienced many challenges as they relate to me being a woman. From the time I started in the industry, I knew I had to work hard to earn the respect of my peers and once I did that, I have remained confident in what I do and gender conflicts have never really been a problem.

However, I do recall feeling a little hesitant when I became the Director of Artist Relations for PRS. Being the only female on the team was never uncomfortable for me but when I became “the boss,” I worried about how the structure change would be received by the rest of the guys in the department especially when you factor in seniority on top of the gender factor. I thought it was best to be up front and honest about my concerns and spoke to each one of my employees individually and much to my surprise, they all welcomed the change and seemed genuinely excited about me managing the department.

WiMN: Any other cool things you get to do aside from signing artists?

BF: Most of my time is actually spent marketing and promoting the artists we are working with. This gives me an opportunity to keep the creative side of me engaged. The best part of my job is the relationships that I have with the artists. Many have grown into friendships through the years and we’re like one big family. I absolutely love to put a group of endorsers in a room together, with guitars of course, and sit back and watch the magic that happens. It’s so neat to see them interact with one another in a casual setting and exchange licks, techniques, stories, etc. It puts a big smile on my face!

WiMN: What are some positive changes you aspire to make in the industry?

BF: I don’t know if there’s anything I can personally do to have direct impact on the industry. The music industry has undoubtedly changed significantly through the years.  We’ve entered into a digital era where musicians are creating, recording, producing and marketing their music in a different way.  I fear that technology is only going to continue to advance and electronic music is going deter our future generations from picking up an instrument and appreciating music for what it really is… melody, rhythm and harmony. I wish I had the answers but I don’t so I’m just going to continue to put guitars in the hands of musicians and hope that the continued support of manufacturers like us will continue to enforce the need and desire for instruments.

WiMN: Who are some of your biggest role models?

BF: Hmmm… that’s a tough one. I guess I’d have to say Robin Roberts. I often think back to her acceptance speech at the 2013 ESPYs when she was honored with the Arthur Ashe Courage Award. I got goosebumps as I listened to her describe her life journey as a female sportscaster and news anchor, her contributions to women’s basketball and of course, her fight with breast cancer. Her words were very powerful and her demonstration of strength, determination, self-confidence and courage in everything she set forth to do was very inspiring.

WiMN: Do you think it’s true that “there aren’t enough female guitarists”?

BF: I wouldn’t necessarily say “there aren’t enough female guitarists.” I think there are a number of female guitarists who have not been recognized by the music industry. It’s rare that you see a female on the cover of or featured in a M.I. magazine and on the rare occasion that it does happen, the female artist is usually compared to a male guitar hero.

I have had the good fortune of working with some pretty incredible female guitarists and bassists, Orianthi, Jennifer Batten, Donna Grantis and Rhonda Smith to name a few. The more exposure we give female musicians, the more influential they will be on women and young girls who are aspiring to succeed in their music career. On that note, I have noticed moderate improvement the last 3-5 years and hope the trend continues.

BF: I’m extremely humbled to have been chosen as a recipient for a She Rocks Award. It is truly an honor and I look forward to the opportunity to network and with other women in the industry.

WiMN: Let’s wrap up with one of your favorite quotes…

BF: “A pyramid isn’t built from the top down. The apex is attained only by laying strong foundation stones, one by one. The same is true of achieving a lofty objective. The crucial thing is to lay the first stone, to take the first step.” – Daisaku Ikeda