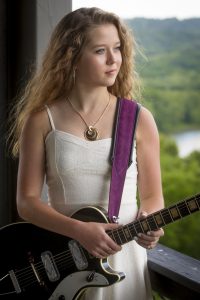 At 15, singer/songwriter Erin Coburn has already accomplished what many musicians only dream of. In fact, her journey in music started at age two playing her father’s acoustic guitar like an upright bass while making up her own tunes. Today, she continues to tour and promote her first album Chaos Before Conformity which was released October 2015.

Born in Cincinnati, OH, Coburn’s parents encouraged and nurtured her talent at an early age. She received her first acoustic guitar and lessons at age 8, but found they stifled her creative flow, “I didn’t like lessons because I preferred to do things my own way.  By age 10 I wanted an electric guitar, but my parents wouldn’t get me one until I played my first recital.  With the help of my guitar teacher I made up my own blues song and performed it in front of about 1500 people.”

That first performance kick-started her passion and drive for more. Coburn started attending open mics at age 11 and received her first paying gig at age 12.  That was also when she started writing her own songs.  Soon after that, she would learn to play electric guitar, bass, piano, synthesizer, and as of recently the ukulele. She is currently endorsed by Boulder Creek Instruments/Riptide Ukuleles. By age 13, she earned enough money to go into the studio and record her first album.

Her journey just snowballed from there with her parents taking her on tour the summer of 2015.  Coburn performed at many events, festivals, and on radio shows across the U.S. to promote her first album.  Her hard work paid off because within a couple of months after her CD release Chaos Before Conformity made the Top 100 Americana Albums Chart.

Coburn seems destined for greatness, but I wondered how all of this newly earned success effects her teenage life, and where does someone so young find inspiration to write so many songs? She found the solution; using a planner to ensure quality time is spent on school work, music, and socializing with friends and family. As far as her songwriting inspiration, Coburn simply writes from the heart and from her life experiences. She was in middle school when she wrote her first album. Her creative flow is never-ending as Coburn now has enough songs written for two more albums – a blue’s collection and an alternative rock collection. Her music inspiration comes from local guitarist and friend, John Redell as well as a vast variety of iconic greats like Eric Clapton, Etta James, Cage The Elephant, Samantha Fish, Miles Davis, Joss Stone, and Kurt Cobain to name a few.