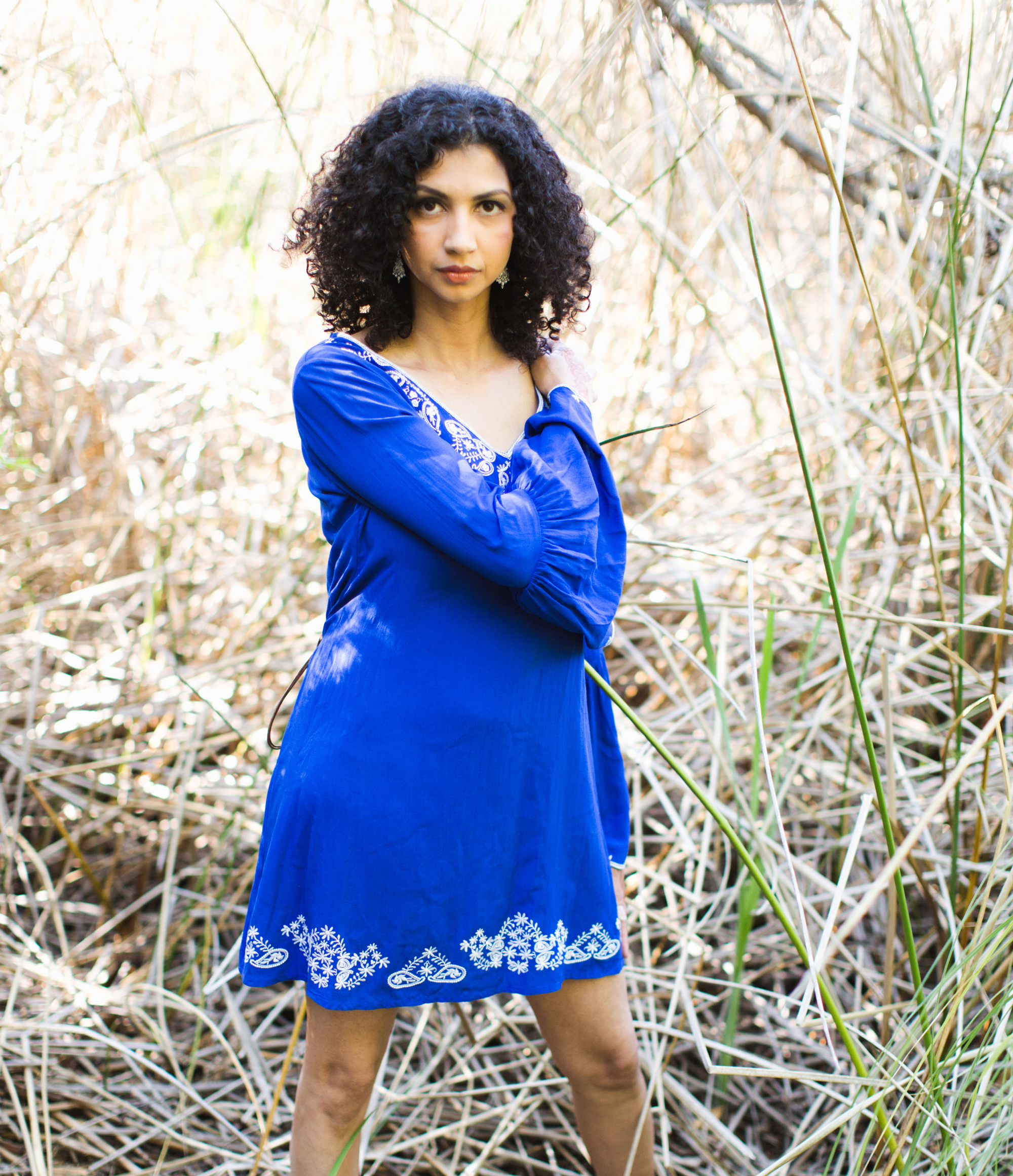 She Rocks Showcase performer Anjali Ray was raised in New Delhi until the age of ten. As an artist, Ray draws on her extensive training in classical piano, Indian Hindustani classical vocal training, and occasional moonlighting as a jazz pianist to create emotional and haunting melodies.

Learning piano through the British school of music at the age of four, Anjali’s early musical foundation was later strengthened by the contrast of her Indian vocal training in Chicago, enabling her to begin writing her own songs and communicating in a way words alone never could. Her songs are sonically captivating, blending rhythms and music from East and West, and her track “Indigo Boy” was considered for a Grammy nomination in 2015.

While balancing an engineering career and motherhood, Anjali Ray continues to perform worldwide, having taken her music to India on tour in 2016. She has performed for numerous programs and benefits including the South Asian Helpline and Referral Agency (SAHARA), Indian Pharmacists Association, and the Doug Flutie Foundation, and is one of the most groundbreaking Indian artists today in Los Angeles.

To find out more about Anjali Ray, visit at www.anjaliray.com.

WiMN: When did your musical career start and how did you get there?

AR: It’s difficult to define the point at which the hobby became the career. Music has been in every corner of my life in various forms and avatars, and there was a point in my early 20’s after I had recorded my first album that I tried to make it a career. It didn’t last long and was unsatisfying both financially and emotionally. But even subsequent to rejoining the engineering workforce and becoming a mother, I never stopped writing.

Many years later, when a producer chanced to hear one of my songs, that’s when things got serious, I wrote and recorded the Indigo album, and began playing out again. When I look at that story from a distance, I basically slogged at a hobby that I was extremely passionate about for almost 30 years before it began resembling a career.

WiMN: Who have been your biggest influences throughout your career?

AR: They are varied and disparate, though the one thing they all seem to have in common is an organic sound. Some are obvious, such as Sarah McLachlan and Tori Amos. Others, such as Mark Knopfler and M.S. Subbalakshmi are less so. I’m lucky to have had exposure to a diverse range of music, from classical Indian songs to rock and roll, but every time someone moves me it’s usually one signature thing.

For Sarah, it’s the way she sings and phrases her words, which I feel are so respectful and elegant. For Tori, it’s the way she can make a piano sound both delicate and powerful at the same time. Mark Knopfler can make a guitar sound like a human voice. I will actually be performing at an M.S.Subbalakshmi tribute concert in Chicago this December, and her singing inspires me to just close my eyes, not worry about who is listening, and just sing with devotion and abandon. (That being said, I’m frightfully nervous about that performance.) These are just a few examples – it’s a truly brilliant musical world, and ever changing.

WiMN: How did you come up with the idea of mixing classical Indian music with jazz?

AR: I would be the first to admit that I’m not an expert in any one thing. But I’m a Jill of all trades: a decent pianist, singer, and songwriter, and it’s the combination of the influences that actually sets my product apart.

When I was a teen, my Hindustani classical vocal training was constantly competing with my piano lessons and “western” music interests, so it wasn’t a far leap for me to find a way to combine them. The first time I solidified the combination was for my mother’s 60th birthday present, when I took a bunch of songs from her youth and recorded them with piano. It just seemed to work, and was satisfying in the divide it healed.

WiMN: How do you handle being a mom, an engineer, and managing a music career all at the same time?

AR: Poorly. I have this internal fire that makes me want to keep going all the time and every project I take on needs to be done perfectly, but that’s just not possible with everything I have going on in my life. I’ve had to live with this feeling of constantly having loose ends everywhere and making sure when I drop something it’s not catastrophic. It’s difficult to adjust to that new normal. But I cannot give any of them up. I survive with the help of a wonderful husband and extended family that supports me and lifts me up. And I’ve learned to compartmentalize better: to start leaving work at work and being more present with my kids when I’m around them. It’s all still a work in progress.

WiMN: What exciting projects have you worked on recently?

AR: The writing and recording of Indigo was life changing. My producer, Chris Bolden, introduced me to a world of music that was far more serious than anything I had come across before, and I learned the value of collaborating, and planning every note and lyric carefully and purposefully. It was humbling and built my confidence at the same time.

Being able to take those songs to places I call home, such as Chicago and India, did my soul good, even while it was hectic. The Indian community in Los Angeles has also been extremely supportive and receptive to my sound. I’m not sure I’ll get these experiences again, but every year seems to bring new opportunities and challenges, so I intend to keep my eyes and ears open to absorb it all.

WiMN: Can you tell us about any projects or events you have coming up?

AR: Through the remainder of the year I’ll be performing at Couture for a Cause, which is a benefit for acid attack survivors. In December, I will be participating in a concert to honor M.S. Subbalakshmi where I’ve been asked to present a different take on what is a traditional form of singing. My hope is to get back to the drawing board and continue writing more music so that I can eventually do a new album. I probably have about half of it done.

WiMN: Can you share any advice for those looking to make a career in the music industry?

AR: “Making it” is a dangerous phrase to me, because it suggests a destination. I realize it’s important to be goal-oriented, but when I was shooting for the stars, so to speak, I was always distressed by how far off they seemed. Every time I tried to contort myself to be more marketable or more current or more youthful, I just felt awkward and compromised, and it was not a winning strategy.

My own satisfaction came from just doing what I loved, no matter what the audience or external reward. And one day I woke up and realized that even though I wasn’t immensely famous or selling out the Staples Center, I had something better: balance, 100% control over my art, and the opportunity to do what I love on my terms with people that I care about. So that would be my advice: stay true to yourself, and just keep doing what you love. It will find its destiny, even if that destiny doesn’t look like exactly what you though it would.