In celebration of International Women’s Day as well as Women’s History Month, singer-songwriter, multi-instrumentalist and producer Rachael Sage has released an acoustic version of her feminist anthem “Sistersong” via Essentially Pop, along with a fan-sourced video for her song “Spark” that premiered with Popmatters. Both songs appear on her forthcoming album PseudoMyopia, which released March 22 via MPress Records/ILS/Universal. 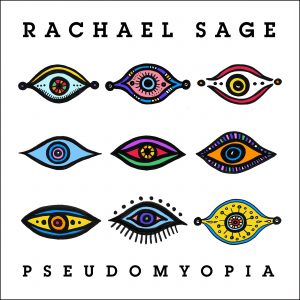 “Sistersong (Acoustic)” is a new, intimate arrangement of Rachael Sage’s longtime beloved fan favorite, originally recorded in 1998 as a tribute to indie trailblazer and feminist icon Ani DiFranco. Featuring guest female artists Nalani & Sarina, Fiona Harte, and Gabrielle Louise, the song mirrors the #MeToo and Women’s March movements, exploring the concept of sisterhood in all its manifestations. In this brand new acoustic rendition, Sage channels the nuances of ageism, sexism and the pressures on women to be everything but themselves, into a powerful anthem for the ages.

Share and listen to “Sistersong (Acoustic)” on your favorite platform.

The song “Spark” is about passion in all of its many forms including love, creativity and friendship. Rachael wanted to create something special involving her fans, so she invited them to send her footage sharing their own passions while using the song as inspiration. Submissions came from every corner of the U.S. and around the globe including Brazil, Australia, UK, and South Korea. Sage selected the best clips and made them into her official video for the track.

Sage tells Popmatters, “’Spark’ is a song about that magical moment when someone or something brand new and inspiring captures your attention and draws you in…when anticipation is still the dominant emotion and you can’t help but be honest because the eagerness to connect is so strong. Basically in this song I’m trying to capture the essence of passion we all feel during those magical moments of humanity before walls have had a chance to build or expectations and doubts have taken hold – when everything feels absolutely authentic, exciting, vulnerable and inevitable.”

Sage is currently on tour through July 2019. Visit her website for ticket info: rachaelsage.com