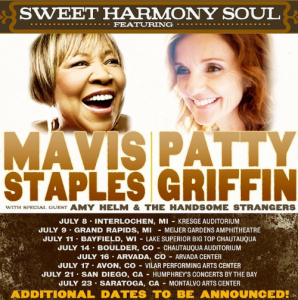 One of the summer’s most moving and powerful lineups will take the stage in eight states between July 8 and 26, 2015. The Patty Griffin/Mavis Staples-anchored “Sweet Harmony Soul” kicks off July 8 in Interlochen, Mich., with the full tour to be announced later this month. Amy Helm and her band will open the run.

Seeds for this July’s tour were planted when Griffin and Staples met in late 2007 at a recording session for the Grammy-winning gospel duets album Oh Happy Day: An All-Star Music Celebration, released in 2009.

The session, where the two recorded “Waiting For My Child To Come Home,” was a harbinger of things to come for both artists, as Griffin next recorded a gospel record, and Mavis turned to Americana and acoustic sounds on her records produced by WILCO’s Jeff Tweedy. Now, nearly eight years later, the singers will take the bond formed in the studio on the road.

“Mavis is such a rare, important role model, and her legacy is still going strong,” Griffin said. “She’s still out there talking the talk and walking the walk. Anytime I get the chance to be around Mavis, I grab it.”

Staples in turn said, “What big fun we are going to have on the road when we hook up with my baby sister Patty Griffin. I’m ready to roll for these dates and can’t wait to get out there with her and Amy.”

Watch the two singers during the 2007 recording session perform here, and see tour dates below: