2017 has been the year of the woman.  We kicked it off fiercely with the Women’s March back in January, a worldwide protest advocating legislation and policies regarding human rights and other issues, which estimated over 5 million in participation. What started out in Washington D.C., included 408 reported marches in the U.S. alone; with 168 reported marches in 81 other countries.

We had movies that inspired and motivated us like Hidden Figures, the true story about three brilliant African-American women at NASA — Katherine Johnson, Dorothy Vaughan and Mary Jackson who served as the brains behind one of the greatest operations in history: the launch of astronaut John Glenn into orbit in the 1960’s.

Women were making an impact in music as well in 2017 with songs of empowerment, finding strength after a painful break up, and breaking free from misogyny and abuse. Artists like Dua Lipa, Nicki Manaj, Lizzo, Lorde, and Hailee Steinfield released ground-breaking music without apologies. She Knows released a list including these phenomenal women and many more: 16 Most Empowering Songs for Women in 2017 so Far

The newest female artist to make her debut with a song about women is RAFF. A classically trained pianist born and raised on the Upper West Side of Manhattan, RAFF grew up sneaking into jazz clubs and dipped her toe into music by releasing covers of David Bowie, Rihanna and Bon Iver on Soundcloud. Her new single, “Sororicide” (which means, ‘the act of killing one’s own sister’) is a subversive alt-pop tune that tells of codependent jealousy and backstabbing between frenemies with equal parts youthful yearning and jaded bitterness. Her inspiration for the song stemmed from her freshman year in Southern California, “I wanted to write about my resentment of women putting other women down in their misled search for empowerment,” says RAFF, “The impossible game of achieving an idealized projection of beauty started to feel like a twisted competition.”

Now a senior at Barnard College at Columbia University where she studies French Literature and Philosophy, RAFF has connected with Los Angeles trio BRÅVES to hone her vision for her sound. 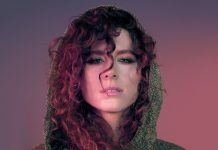