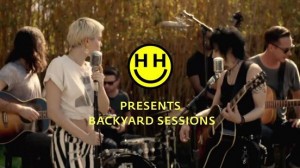 On Tuesday, May 5, Miley Cyrus officially launched her non-profit organization, The Happy Hippie Foundation. As stated in the organization’s official website, its mission is “to rally young people to fight injustice facing homeless youth, LGBT youth and other vulnerable populations.”

Cyrus posted an official launching video on The Happy Hippie homepage featuring herself and Joan Jett covering “Different” as part of the Backyard Sessions that she will be updating to generate buzz for her organization. “And age is not in years, it sits between your ears, you see you’re different,” is crooned by Joan Jett, and is applicable to The Happy Hippie’s focus on having young people getting involved and making a difference in their communities.

The site highlights alarming statistics regarding homeless youth in the United States, and encourages donations and support through multiple outlets provided. Also featured on the site are resources which include 15 organizations that The Happy Hippie Foundation works with, including GLAAD, My Friend’s Place, and The Trevor Project.

Check out The Happy Hippie’s website here to learn how you can make a difference.