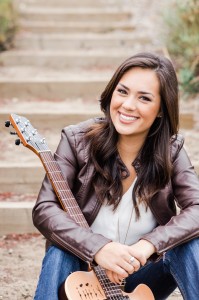 The release of Easy Way Out, the new album by California-based singer/songwriter Melissa Brethauer, is accompanied by widespread distribution.

The eight-song CD is now available everywhere, including her official website, iTunes, Amazon, Google Play, CD Baby and other online retailers, plus streaming sources such as Spotify.

Easy Way Out was a long time coming for Brethauer (pronounced BRETT-how-er), as a follow-up to her prior release, Waiting. This represents the change that has taken place in her writing, which continues to get stronger and more mature.

Also new on Easy Way Out is the introduction of Brethauer playing ukulele, to complement her already-established guitar and piano skills, not to mention her always captivating vocals. To give the listener a sense for how Brethauer sounds live, there is also a track on Easy Way Out that was recorded during a performance at the Rodeo Opry in Oklahoma City. That song is “Daddy,” which she wrote around the time of her marriage and is destined to become a father-daughter dance song at weddings.

Out in support of the new album, Brethauer continues to perform regularly around the greater Los Angeles area; however, besides there and the aforementioned Oklahoma City, she has also played on the Las Vegas strip, in Nashville, Atlanta, Orlando, Hawaii and Thailand. She also recently made another appearance at the Pensacola Beach Songwriters Festival.

Hear samples of the new album on iTunes. MP3s for radio/streaming use are available upon request through Brethauer’s management. A new site is currently being developed to replace that which is currently at www.MelissaBrethauer.com.