On May 28, 2021, five female musicians will release a cover of the classic “Hunger Strike,” in honor of World Hunger Day.

Leah Martin-Brown (Evol Walks), VK Lynne (The Spider Accomplice), Alex Nicole Windsor (Shiragirl), Raine Palladino (Shiragirl), and B.B. Kates (The Drained) met through Gritty In Pink, a community to empower women in music. “We had been wanting to do a collaboration for awhile,” Lynne explains, “and here in L.A., homelessness and hunger have ballooned in the pandemic. It seemed like a natural fit to use our platform to highlight those issues and, at the same time, raise funds to donate towards the cause.”

The single will be available through all major music services (iTunes, Spotify, Amazon, etc.) and all proceeds will be donated to L.A.’s Union Rescue Mission. Union Rescue Mission (URM) is one of the largest missions of its kind in America – bringing help and hope to men, women, and children experiencing homelessness in Downtown Los Angeles.

A video, shot in socially distant fashion, accompanies the release. The song itself can be pre-ordered HERE.

Leah Martin-Brown, currently in Europe working on a new album, sings the late Chris Cornell’s melody, while VK Lynne, co-founder of women’s metal collective Eve’s Apple, handles the parts of Eddie Vedder. Guitar duties are deftly undertaken by Alex Nicole Windsor, who is sponsored by Ernie Ball, while Warped Tour alum Raine Palladino holds down the beat on the drum throne. B.B. Kates, sponsored by Fender and GHS Strings, rounds out the lineup on bass.

The song’s audio was mixed and mastered by Colin McGeoch of Matte Black Audio, and video editing was done by Sean McHugh.

About Gritty In Pink 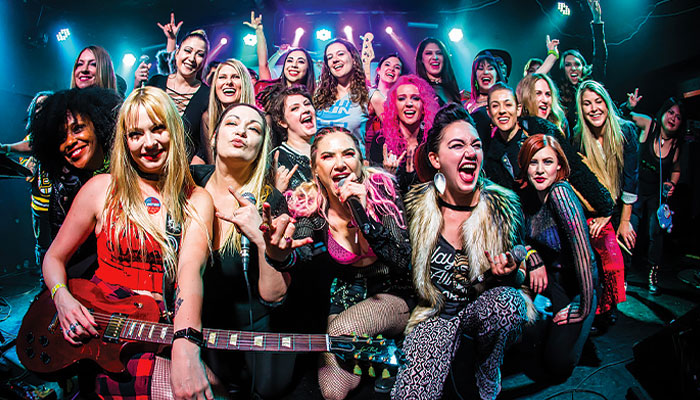 Gritty In Pink is a new platform empowering women in music through performance, partnerships, and networking opportunities. Founder Shira Yevin has a legendary history of breaking down barriers and carving out a space for women, as the creator of the Vans Warped Tour Shiragirl Stage, which featured 300+ female musicians, including Joan Jett and Paramore. Gritty In Pink continues that legacy of providing community and a stage for female voices in a male-dominated industry, having showcased 170+ artists with a collective IG following of over 2.6 Million.