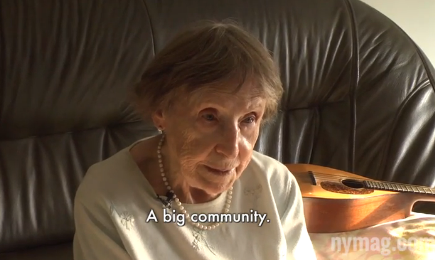 Emily Kessler, a 97-year-old Ukranian Holocaust survivor who sings and plays violin and mandolin, played her first large-scale concert at the Avery Fisher Hall in the Lincoln Center in New York on Nov. 3, in honor of the 80th anniversary of BlueCard, a non-profit which aids needy Holocaust survivors.

At 24, Kessler lost her husband, father and mother to the war, and became a widowed mother.

Through the help of strangers, fake documentation and a very strong will, Kessler escaped and even adopted a 12-year-old girl after both of her parents were killed.

Kessler credits music with helping her take bitterness away.

“It makes you forget the bitterness of the life, the unfairness, and the cruelty of everything,” she said in an interview with New York magazine. “Music is not cruel. It’s always peace and love.”

Watch a video interview with her below: