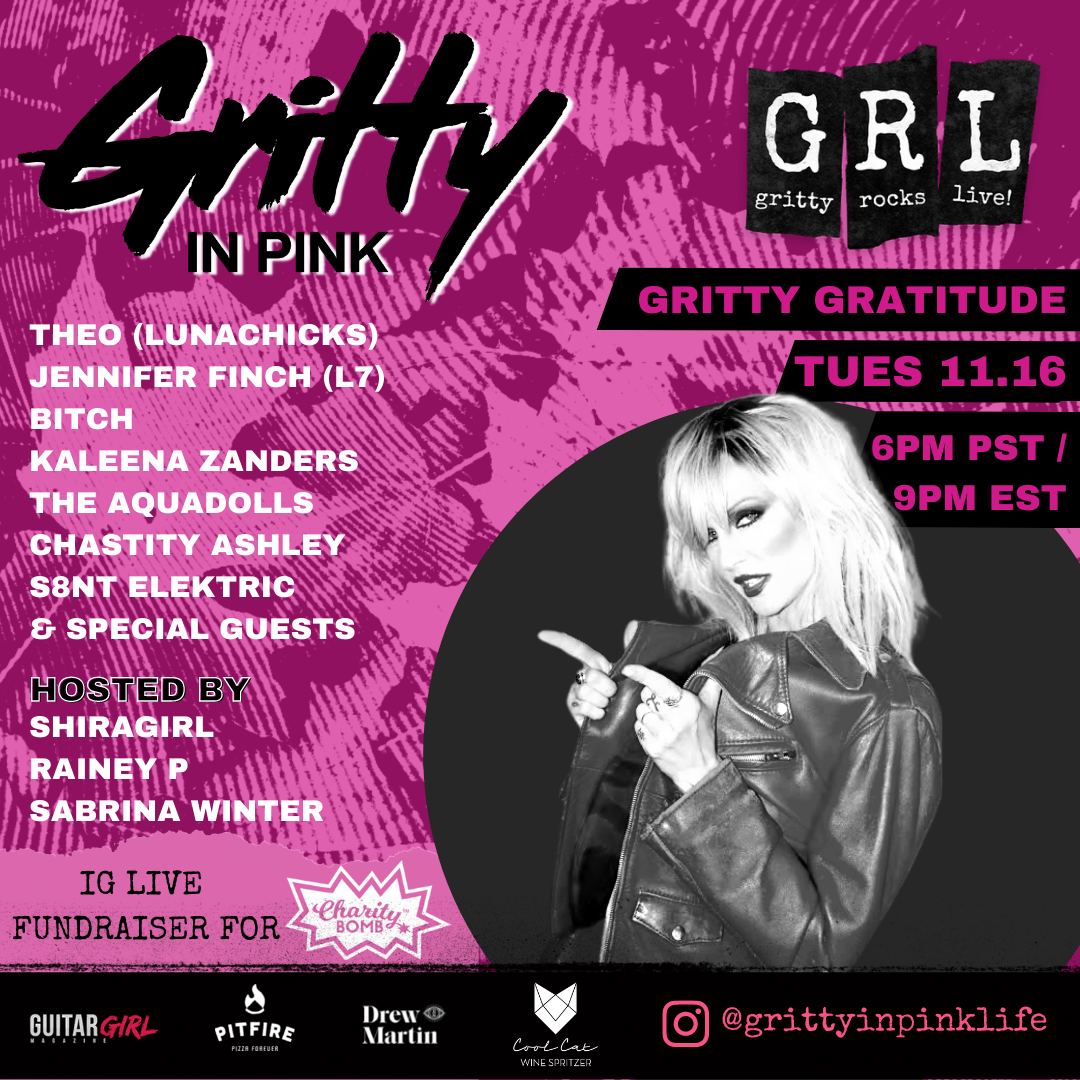 Gritty In Pink is giving thanks this season with a special Thanksgiving edition of Gritty Rocks Live on Tuesday, November 16th at 6 p.m. PT/9 p.m. ET via Gritty In Pink’s Instagram (@grittyinpinklife) and hosted by the legendary Shiragirl with house bandmates Rainey P, and Sabrina Winter.

The special will focus on gratitude for the groundbreaking women in music who’ve paved the way for new generations of female musicians. The LIVE event on Instagram features performances and appearances by a variety of artists like iconic punk rocker Theo from the Lunachicks. The iconic band reunited in 2019 after a 20 year hiatus and recently published their memoir Fallopian Rhapsody: The Story of the Lunachicks.

The livestream is sponsored by Cool Cat Wine, Guitar Girl Magazine, Pitfire Pizza, and Drew Martin and benefits charity partner, Charity Bomb. To stay up to date on Gritty In Pink, visit their Instagram or www.grittyinpink.co for more information on future announcements for live shows.

Charity Bomb is a preventative mental health solutions 501(c)3 organization using EQ/SEL education for children to instill confidence. empathy, and the emotional resilience to navigate their lives, while avoiding the pitfalls of depression, anxiety and addiction. Viewers can participate in the fundraiser by donating directly to Charity Bomb during the show.

At the top of the month, Gritty In Pink announced artist Bitch as their Bandmate of the Month, who will be making an appearance on the Thanksgiving special. In the November issue, Bitch gives advice to young women interested in pursuing a career in the music industry, “Don’t stop. Don’t think that ‘sexy’ is your only way in. Don’t listen to everyone. Find your team. Follow your heart. Know yourself. Go for it.” She’s currently gearing up for her new album Bitch Craft, releasing in February 2022 and recently released the music video to her empowering single “Easy Target.” She dedicates the melodic song to being a woman and the power of speaking your truth.

The single is available on all digital streaming platforms. Shira Yevin, frontwoman of Shiragirl and Gritty In Pink founder, says “It is an absolute honor to share the Gritty virtual stage with such icons as Theo Kogan, Jennifer Finch and Bitch. Bands like Lunachicks and L7 inspired an entire generation of riot grrrls, making way for new generations of progressive female artists, and generations to come. We can’t thank these women enough for pioneering the movement to achieve gender equality in music, particularly in the alternative scene. Gritty In Pink wouldn’t exist without these women.”