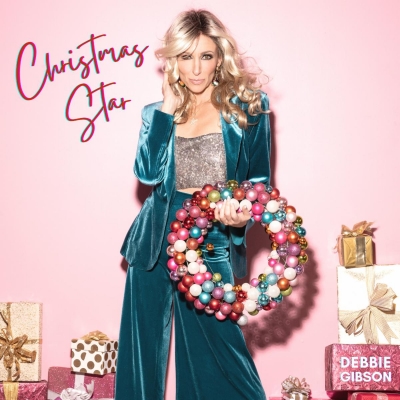 Debbie Gibson embodies the holiday spirit with the release of her new, infectious, up-tempo, original song “Christmas Star” via Stargirl Records, combining the cheerful nature of the holiday season with the timeless charm and artistry Gibson has become known for. Written solely by Gibson and co-produced with Sean Thomas, it’s steeped in sleigh bells and the perfect addition to your Holiday playlist.

“’Christmas Star’ is a poignant ode to letting go of the past and being the change you wish to see in the world and in yourself this holiday season and beyond,” says Gibson.

This past fall, Debbie Gibson released her long-awaited 10th studio pop album The Body Remembers – her first in 20 years – marking a new chapter for Gibson on her own label Stargirl Records. It is filled with a mix of modern pop hooks and upbeat club bangers along with melodic yet nostalgic tracks that pay homage to her earlier music. The Body Remembers represents all things Debbie: empowerment, living your best life, and staying eternally electric. You can listen to The Body Remembers HERE.

Each song off the album represents a visceral account of Gibson’s life in the past decade and shows off the quintessential aspect of Gibson’s legendary legacy, her songwriting. Ranging from themes of the fantasy of the “perfect relationship” (“Red Carpet Ready”), being stuck in the prison of one’s mind or life and needing to break free (“Freedom”, “Girls Night Out”), perspective on past loves (“Strings”), daily self-motivation and living an aspirational life (“Runway”), nostalgic summer love (“The Body Remembers”), the current world landscape (“Tell Me Love”,“Legendary”), unrequited love, romantic love, self-worth, etc. The album also includes Gibson and her pop soulmate Joey McIntyre of New Kids on the Block on the brilliantly reimagined classic no. 1 “Lost In Your Eyes, The Duet” as well as her summer disco bop, “One Step Closer,” which is an ode to pushing through the negatives in life knowing what awaits is a greener pasture.

Gibson recently teamed up with the GRAMMY Museum where she discussed ‘The Body Remembers’, her iconic career, and performed several songs off the album. You can watch the interview by Lyndsey Parker here.

You can connect with Debbie Gibson here: