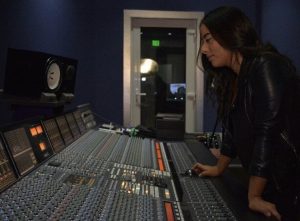 Valentina Alvarez’ musical journey began at age eight in a music school in Venezuela. As a teen, she became curious about digital recording, and after getting her first taste of ProTools, became hooked. Alvarez went on to study audio recording in the U.S.

Today, she’s an audio engineer at Noisematch Group in the Miami/Ft. Lauderdale area, where she works on a variety of projects including recording sessions, the studio’s proprietary online learning platform, and occasional TV audition events. The full-service studio’s clients include CNN, the Recording Academy, Warner Bros., Telemundo, and a number of recording artists.

Read on to learn about Alvarez’ challenges and triumphs as she worked to find her place in a field she loves.

To find out more, visit noisematchstudios.com.

WiMN: As a child, you learned to play the piano. Then as you got older, you made the switch from performance to engineering. When and how did you know that engineering was your true calling?

VA: I loved to play the piano, and my professor was an amazing teacher. We often talked about production and engineering and what I saw myself doing in the future. Considering the fact that I was a very introverted person, my answer was always “I don’t know, but if it isn’t music, I don’t want to do it!” Then my curiosity sparked when I was about 13 years old, and I often asked about Logic and Pro Tools and how they worked until eventually, at 16, I got my very own MBox and Pro Tools (if I recall, it was Pro Tools 8).

I instantly fell in love with the idea of being able to change sound in any way, shape or form I wanted, and having the desire to make everything sound perfect felt right. It came easy to me, and I was eager to learn and record, edit, tune, mix, and anything having to do with sounds and recordings more than I wanted to play the piano, so I made the complete switch when I left my country, Venezuela, and started my Bachelor’s degree in Audio Production.

WiMN: I heard a story about how as an intern, you were asked to do a rather complex orchestral set up in very little time. What did you learn from that experience and how did it help prepare you for the challenges of your job now?

VA: That was actually my very first experience in a professional studio setting; my interview was the day before and all I was told was to come in at 8:00 a.m. I didn’t know what to expect at all, but I went in, and the first thing I had to do was a setup for a 16 piece orchestra, not knowing how this studio worked whatsoever. The main thing I learned was to really dig deep into signal flow and understanding how the signal chain works. Being in control — or at least knowing where and why the chain could break, meaning from analog to digital — gave me a sense of relief. Now I apply it to every studio I go to and it speeds up the process by a lot. I also use it to get familiar with mics and apply different techniques to maximize the quality of an already good performer.

WiMN: An audio engineer is responsible for making recordings “sound good.” What are some things you did to develop your ear for sound?

VA: Frequencies! Listening to white or pink noise frequencies and identifying what hertz or kilohertz they were in helped a whole lot. I always see the song as a car and a bunch of people are in it and I have to make a nice, comfy spot for my vocals. So cutting down a little bit from instruments or sounds that are in a similar frequency range as the vocals always opens it up, and as a result, it sounds brighter, clearer and all the good things not only in vocals, but any sound you want to be prominent in a mix.

WiMN: Noisematch Studios offers a variety of services such as recording/mixing/post, rehearsals, voiceovers, video shoots and more. Are you involved in all of those, or do you specialize in certain types of projects? Which do you enjoy working on the most, and why?

VA: There’s always something to do in every project we take, but my favorites are always the recording sessions, mixing and anything post production. We have this main project called MusicMastermind, which is an online learning platform that shows you tips, tricks and techniques we use inside the high-end professional recording studio. It was all made in-house — from the writing to the filming and finally the post production. It took time and a lot of patience, but being part of every step in the development was definitely rewarding; it refreshed my knowledge and taught me new things I had no idea existed in the audio world. It has been my favorite project to date!

WiMN: As a female working in audio, have you ever experienced any discrimination from clients, co-workers, etc.? If so, how did you handle it?

VA: To date, there’s still the “what do you know about this?” or “why is someone like you doing this?” type stuff. And also being a young woman has put limitations in a lot of places. The discrimination doesn’t really stop and some might actually take it as a joke. I left my first internship when I was 17 because I was still viewed as the coffee/cleaning person by the manager even when other engineers needed me to assist, until I took a step and went into a session, only to be publicly kicked out and told that my place wasn’t in the studio. When others simply don’t believe in you, there’s always a place or someone else who will. It’s a real shame that nowadays this is still something to look out for. Some of the most talented engineers I’ve had the pleasure of co-working and collaborating with are women who’ve also gone through experiences like this. I say, ‘just let your work talk for yourself.’ It’s worked so far!

WiMN: What are some notable projects you’ve worked on at the studio?

VA: The making of MusicMastermind.tv was my favorite so far. Assisting in the recording of “Despacito” was a blast, and the outcome was incredible. Last but not least, hosting the Miami auditions for The Voice.

WiMN: In thinking back to when you first started your career, what are some tips you’d give to other young women starting out?

VA: Just go for it! There will be people  — even the closest to you — who will turn your ideas, hopes and dreams down, but the most important thing is to not let it affect the reasons why you chose this career for your life. Never allow yourself to be disrespected or diminished for being a woman; stand your ground and be confident about your knowledge. That says more about you than what others will. Last but not least, do it for yourself and most importantly, enjoy it!