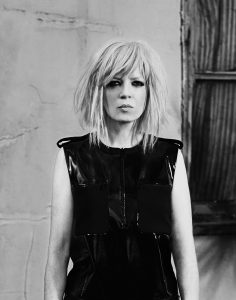 Garbage burst onto the music scene in 1995 with hits such as “Stupid Girl” and “Only Happy When it Rains.” Fiery lead vocalist, Shirley Manson, also captured the attention of critics and fans alike with her magnetic stage presence and distinctive voice. Except for a brief hiatus in 2012, the band has been making music and touring for over 20 years, with their sixth album release, Strange Little Birds, having debuted in June 2016. Manson and her bandmates also have a coffee table book coming out in 2017 titled This is the Noise That Keeps Me Awake. It will feature essays and other short pieces from each of the four band members—Shirley Manson, Butch Vig, Duke Erikson, and Steve Marker—plus rare and never-before-seen photos of the band.

We are thrilled to be presenting Shirley Manson with a 2017 She Rocks Award at the upcoming NAMM Show in January. In honor of the occasion, she recently spoke to us about her early musical years, not being afraid to do her own thing and stand her ground, and advice for others looking to do the same thing.

Find out more about her and Garbage here.

The WiMN: When did you know that music was what you wanted to do for a living—was there an “a-ha” moment, or was it more of a natural progression?

SM: It was absolutely by happenstance that I became a “musician.” I was always very involved with music as a child. I studied piano, violin and clarinet at school. I sang in two different extracurricular choirs, I even sang in a youth theater but I never imagined a career was possible in music. It never even occurred to me.

The WiMN: Were there any women who encouraged or inspired you along the way?

SM: My beloved mother was a singer with a swing band called the Squadronairs before she got married and had children. She definitely encouraged my sisters and me to listen to really great music when we were growing up like Nina Simone, Billy Holiday, Peggy Lee, Sarah Vaughan. Listening to those voices and knowing their stories––especially that of my mother––most definitely inspired me.

The WiMN: You’ve had a wide array of performance experiences, from club dates to large venues. Any particularly memorable experiences?

SM: From playing a third century Coliseum built by the Romans in Israel, to the opening of Scotland’s first parliament in 300 years in royal gardens underneath an ancient castle, to playing next to Douglas Fairbanks Jr.’s crypt in Hollywood Cemetery, to playing a swanky hotel ballroom in front of former President Clinton for MusiCares. The list is endless!

The WiMN: You’re known as a woman who does her own thing and is not afraid to break from convention. For many, that confidence comes only after they’ve had a bit of life experience, so what  would you say to young musicians who are trying to combat the pressure to fit into a box or to not break away from what’s “expected” from them?

SM: I would like to say, ‘Do your job. Hold fast. That’s the job.’ Instead, I say something kinder and more encouraging, like, ‘Just keep going. Keep standing up. If it was easy, everybody would be doing it.’

The WiMN: Your band seems to have a very collaborative and cooperative approach, but for women in music, that’s not always the case. Was there a time in your career where you faced discrimination as a female in the industry? If so, how did you overcome it?

SM: I continue to encounter discrimination and so I continue to counter it. So far, it hasn’t done me too much harm, but nevertheless it annoys me when it happens. I believe myself to be equal to anyone on this planet. That’s what I was raised to believe in, so when I encounter any form of discrimination, I just bear down on it. Hard.

The WiMN: Any advice for young women who aspire to be musicians or break into the music industry?

SM: Get ready. Toughen up. Know what it means to take a hit. Be disciplined. Be willing to get your heart broken over and over again. Learn what it means to stand your ground. Be brave enough to try again. Understand nothing is personal. Know your enemy. Recognize an ally. Hold on to your publishing rights if you can. Know there are a million girls out there ready to take your place in a New York second. If all of this doesn’t faze you, you’re clearly born for it, so now go on out there and get you some! You’ve got everything you need.

The WiMN: Finally, what does it mean to you to be honored at the She Rocks Awards?

SM: I’m not sure awards actually mean anything in any real, tangible sense. They are completely subjective and often a cause of outrage or disappointment among others. However, it’s always a delight to be acknowledged in a business I’ve been immersed in for 35 years, whether by one particular, enthusiastic fan or a body of professionals. To say otherwise would be a bit churlish. So thank you very much; I’ll take the love where I can!