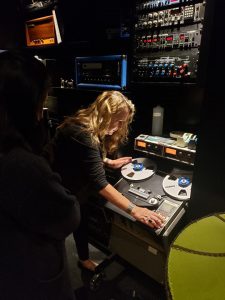 Recording engineer/producer Lenise Bent didn’t always have plans to work in audio. In fact, she originally planned to pursue a career in film and TV production. However, those plans immediately changed the moment she set foot in a recording studio.

Lenise is widely regarded as a trailblazer for women in audio. Throughout her time at the legendary Village Recorders studio in Los Angeles, she contributed engineering work for such names as Steely Dan, Fleetwood Mac, and Supertramp. She even made women’s music history in 1980 when she became the first female engineer to earn a platinum record for her work on Blondie’s AutoAmerican.

We sat down with Lenise to discuss her career origins, shift to post-production, and advice for fellow women in audio.

WiMN: You come from a very musical family. Looking back to your childhood, were there any particular moments that helped shape your decision to pursue a career in music?

LB: Oh yes, many, which I now see in retrospect. I realize I was obsessed with music from the very beginning. There was always music in our home, whether it was the radio, records, musical TV shows, or the family get-togethers where everyone played guitars and sang. I played children’s records constantly on my little portable record player, as well as my older siblings’ 45’s of Elvis, The Everly Brothers, Buddy Holly, and The Coasters; all of which I still have. Though I’m sure they’re in dreadful shape, as I was 4 or 5 years old then.

I begged for a transistor radio for my 7th birthday, and then the next year a little reel-to-reel Silvertone tape recorder I’d see in the display case at Sears. I wanted that tape machine so badly I’d feel sick. It was the best day of my life (so far) when I opened my birthday gifts and there it was. I can still remember the smell of the tape as I’d record TV shows, my family singing, or my cousin and I doing little plays and interviews. Wish I knew what happened to it, such a darling little thing, 3″ reels.

My brothers and I were also in the Compton Festival Orchestra, I played flute and they played trumpet. I made my first record at the age of 10. I still have it, hilariously juvenile but heartfelt. I also took piano lessons, got my music theory and circle of fifths down.

WiMN: You studied film and TV production in college before dropping out and enrolling in the Sound Masters Recording Institute. How did this career change come about?

LB: My boyfriend at the time had a band and the guitar player, Roger Linn (before his iconic invention The Linn Drum!), got a gig as Leon Russell’s engineer. Leon (Wrecking Crew, MadDogs and Englishmen, George Harrison, much more) had a studio in his house, something very few people had back then as the equipment took up lots of room and was very expensive. I was a huge fan of Leon’s, so when Roger said I should come by and check it out I immediately drove out there.

I rang the door bell and when Leon answered the door himself I nearly fainted! But then I heard 21 tracks of these angelic voices coming from the former dining room and as I entered I saw Roger sitting at a huge recording console, a Stevens 40 track tape machine and all the outboard gear surrounding him. I felt I was in heaven and knew immediately that this is what I wanted to do for the rest of my life. The next day I dropped out of university, found a recording school and went home to tell my parents. Miraculously, they were totally supportive.

WiMN: Your career spans several decades and covers artists of multiple genres. Can you tell us the projects you’ve worked on that stand out the most to you?

LB: I’m humbled to say there are many: Aja and Gaucho by Steely Dan, The Last Waltz by The Band, Breakfast in America by Supertramp, and AutoAmerican by Blondie are the obvious stand-outs. There are several independent recordings too, especially Rich DelGrosso’s Get Your Nose Outta My Bizness which was the first record I produced after my years away from recording music. It was a truly magical experience and confirmed for me that I was fulfilling my life’s purpose again on this earth.

I’m very excited about my current record, an all analog recording by the rock/roots/blues band Primal Kings. Fantastic musicianship and original songs (all to 2 inch tape, mixed to 1/2″!), and the greatest guys on the planet. We’re having a blast!

WiMN: Being the first woman to earn a platinum record for engineering must be an incredible honor. What was that like?

LB: I was pretty blown away when someone pointed it out, I hadn’t ever thought about it. I’m very proud of this accomplishment mainly for the purpose of empowering and inspiring other women to excel in whatever they choose to do. Blondie’s AutoAmerican is a fantastic record, so creative, with the iconic song “Rapture” being the first rap hit. I am honored and grateful to be this important and cool record’s engineer.

WiMN: What inspired your decision to get into post-production?

LB: I was diagnosed with stomach cancer a few months before I started AutoAmerican. I knew this was going to be a fantastic record so I hung in there. Debby Harry would bring me macrobiotic food, she’s the best. The day after we mastered, I drove down to Mexico and checked into a cancer clinic. The doctors told me, “quit your job or die,” so I quit and got my health back. After my “cancer break” I felt that the stress of the music business was more than I could deal with at that time.

Also, during my 6 years away, the bottom had fallen out of the music business. There were no more big budgets. Several of my colleagues had shifted to post audio as there was a lot of work. So, with their help, I started over. I went from making big bucks recording hit records to an entry level position doing foreign music and effects tracks (M&E’s) for the Disney cartoon catalog. My first shift was from 1am to 9am. Fortunately, that only lasted a few months.

Eventually, I branched out to other areas in post and production sound, mostly recording foley. Because of my musical training I landed a job with Dreamworks as a foreign dubbing supervisor, producing the foreign vocals on several animated features including Shrek and Spirit: Stallion of the Cimarron. It was while supervising Shrek 2 and producing the international star talent that I realized I really wanted to make records again. I still occasionally do post, as well as restoration and archiving. I enjoy it all, but music is my passion.

WiMN: When you were hired by The Village in 1976, you were one of four women on the engineering staff. Have you seen an increase in opportunities for women in this industry since then?

LB: Actually, I feel the opportunities were always there. I just don’t think women were encouraged to go into the audio field or even knew that this was a career possibility. I certainly didn’t until I walked into Leon Russell’s house. To me, being a recording engineer, whether in post or music, is a genderless field. It never occurred to me that I wouldn’t be able to be a recording engineer because I was a girl, even back then.

WiMN: Do you have any advice for women looking to pursue a career in audio?

LB: The important thing is to be passionate and good at what you do. Be an audio pro first. Also, be someone others enjoy working with. Be an asset, not a liability. That is genderless advice, too. You can be the best ProTools aficionado and the fastest editor ever, but if no one wants to be in the same room with you for more than 5 minutes it won’t matter.

Depending on what area you want to pursue, be mindful of the sacrifices. If having a family or even a pet is important to you, you may want a gig that lets you be home more. Save your money, especially if you are an independent contractor. I recommend getting a gig that offers benefits, such as health insurance and a pension plan.

Technology changes and the industry will as well, so stay up on what’s happening both technically and on the business end. Be flexible. Be mindful of your health. Hydrate. Stretch. Sleep.

WiMN: Finally, what’s in store for the rest of the year?

LB: I’m delighted to report that I am finally scheduled to cut the vinyl for Primal Kings. All analog! There are some other cool productions in the works that I can’t really mention here as well, too soon. Speaking engagements and analog recording workshops are also in the works. Lots going on!