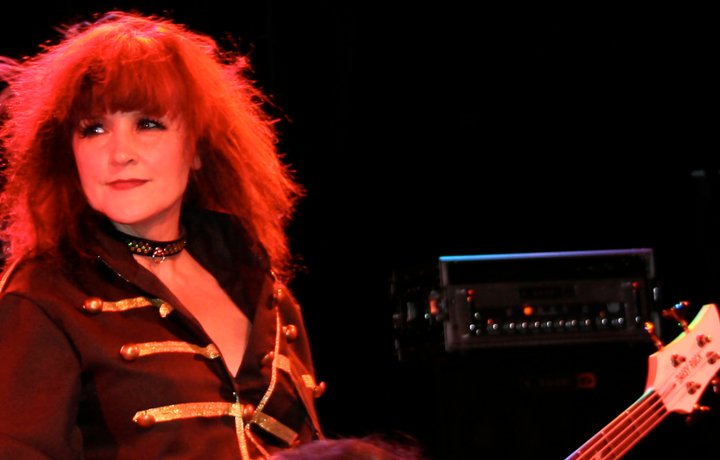 Combining a lifelong passion for making music with a desire to “level the playing field” for dedicated female guitarists and bassists of all ages, Tish Ciravolo founded Daisy Rock Girl Guitars in 2000.

Ciravolo’s dream that “every girl who wants to play guitar is welcomed and inspired to do so” is centered on the love she has for her two daughters, Nicole and Sophia.

Beyond her work with Daisy Rock Girl Guitars, Ciravolo is on a mission to spread her gospel. She’s written instructional books, worked in film and TV, and recently launched her latest venture – motivational speaking.

WiMN: What was your introduction to music as a kid? How did you start playing?

TC: I started to play guitar because I was in love with Shaun Cassiday from The Hardy Boys. I just knew – I JUST KNEW – that if I played guitar like by best friend Barbara’s oldest sister Ann, then one day Shaun would notice me and my musical brilliance and realize that his one true love was playing the guitar. And in that moment, he would HAVE to marry me because he would not be able to live without hearing my guitar playing every day, as it would speak deeply to his soul and make him yearn for me, his true love. I was in the 7th grade.

Barbara taught me acoustic guitar, which I could somewhat play. But I really shined when I found the bass guitar. I felt it – it was in the rhythm of my life. So I decided to play bass and off to my local music store I went. In the early ’80s, very few women walked into rock music stores. So of course the guy behind the counter and my boyfriend decided what bass I should play. It felt like a baseball bat: heavy, thick, so much like a boy guitar. So I returned it the next day and played every single instrument on the wall until I found a Yamaha BX-1 headless bass that I could play.

WiMN: Can you tell us about your path to launching Daisy Rock Guitars?

TC: I played in hundreds of bands. Some for a day, some for four years. Mostly all-girl bands – remember? We were going to rule the world! We were going to finish what The Runaways, The Bangles and The Go Go’s started!

I dealt with discrimination ALL the time from men in this industry… I was always asked who I was buying strings for – my boyfriend? He must be in the band because girls don’t play. Yes, every week was the same old story… did I book the rehearsal room, a mere female? Where are the guys in the band, you know, the ones playing the instruments?

And the best was being told that the soundcheck wasn’t for the opening band, the GIRL band, because they usually suck and its not worth the sound mixer’s time. Have I painted a true picture of REALLY what we dealt with? Of course there were men that were supportive, if not for the novelty of it all, then for the fact that they could sleep with the girls in the band. Truly, a terrifying time for girls.

So one day, I stopped. Had a baby. And when she was 1 1/2, I was pregnant with my second child, and my first daughter, Nicole, drew a daisy on a piece of paper. I looked at it, drew a neck, and then a headstock. I took the drawing to my husband, Michael Ciravolo, President of Schecter Guitars, and told him that we should make guitars for girls that are lighter in weight, with a slimmer neck profile and super fun body shapes and sizes, just so we could inspire more girls to play guitar. More girls playing guitar means that we could stop the discriminatory attitude of most men towards female guitar players. And we could rule the world!

WiMN: Who are some of your favorite guitarists who sport Daisy Rock?

TC: I love all the girls that play and discover Daisy Rock Guitars, like the Lisa Loebs, the Vicki Petersons, the Wanda Jacksons, and the Tegan Maries of the world.

TC: I launched a new campaign as a motivational speaker this year. I was asked to do a Ted Talk a couple of years ago and when I got on stage and started telling my story, I realized how important that story is to other females outside of the music industry.

Since Daisy Rock Guitars is the only girl guitar company in the world, I can inspire and empower by telling my story to high schoolers, college students and female entrepreneurs. I tell them about my experiences along the way – the good and the bad – and the amazing way everyone can change the world to be a better place.

I like to say, if I can do it, so can you! Make a plan for what you can share and what you would love to hear and go for it!

WiMN: In addition to all of this, you’ve worked in film and television as well.

TC: I have an amazing writing partner, Karen Peterson, whom I was producing short films with before I started Daisy Rock Girl Guitars. In the last few years, we have gotten back to writing for film and television, including the girl guitar player in different settings. If there is a girl guitar player in a film or TV series, we want to be involved. We currently have a script on a first look and we have animation series in development.

WiMN: Your commitment to empowering female musicians has also led to the realm of book publishing. Can you tell us about some of the titles you have released? Plans for more in the works?

TC: Alfred Music contacted me 13 years ago to write the first girl guitar method. In the course of 13 years, we wrote the Girl’s Guitar Method Book 1 and 2 and we had Janet Robin teach guitar on the DVD collection. I also wrote the Girls Bass Method and the Girls Ukulele Method with Alfred Music.

I’m open to continuing this path of developing educational materials designed for females in music education. It really empowers a girl to learn an instrument when she sees another girl doing it. I am the expert on this marketing strategy, so if anyone out there has any ideas, contact me at tish@daisyrock.com – HA!

WiMN: Any words of advice for young female musicians or business entrepreneurs?

TC: Hey girls, persistence is key. Find your muse and set her free. If you are in tune with yourself, you can conquer the world. And if you need help, need mentoring, need guidance, contact me.

WiMN: What’s next for you and Daisy Rock?

TC: I am in several negotiations at the moment for new distribution. We are going to have a tremendous growth year in 2017 and beyond. New guitars to debut. New frontiers to conquer in the speaking community. And new programs to watch, all empowering girls to play guitar. I’m not going to stop until the discrimination does…

That’s my story and I’m sticking to it!