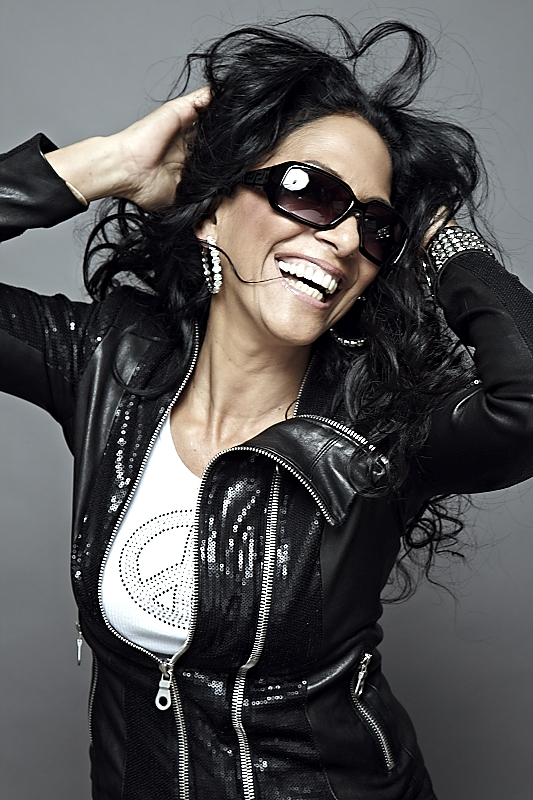 Escovedo also toured, recorded and co-wrote with Prince for many years, while garnering hits of her own from a string of successful solo records.

The purpose of the She Rocks Awards is to pay tribute to women who display leadership and stand out within the music industry, and the WiMN is proud to honor a woman who  represents this idea completely.

The She Rocks Awards take place at 8:30AM on Friday, January 24th, at the Anaheim Marriott Hotel during the 2014 NAMM Show. Click here to learn more and buy tickets.

You can find out more about Sheila E at her official website.

WiMN: What is your earliest music-related memory? What attracted you to drums?

SE: Music has always been a huge factor in my life, I come from a musical family and it was always there. I remember the first time I got up on stage to play with my dad, Pops Escovedo, and it’s probably the strongest early memory I have of music. Right from there, I was hooked.

As far as what attracted me to drums, there’s so much life surrounding it, and percussion. It’s at the very heart of the sound, it’s the beat that drives the music forward and keeps it together. But while it can be the foundation when it wants to, it can also do it’s own thing and jump out in the spotlight whenever. It’s unpredictable and free and I love it.

WiMN: You played with Lionel Richie, Marvin Gaye, Herbie Hancock, and Diana Ross by the time you were in your early twenties. Can you describe these experiences?

SE: You know, I can’t help but feel honored. To have a career that has allowed me to play alongside so many great, legendary artists, has been a thrill. While I didn’t always realize it at the time, everything has moved so fast ever since I was around fifteen, I learn and grow from everyone I work with.

Music is collaborative, it evolves, and you change with every new experience. While you’re there working with these artists, you’re focused on the music, you want to make something really special. It goes by in a flash, it’s a whirlwind and before you know it you’re moving on to the next project. But then you’ve got to take the time to stop and really look at the music you created, and you find that it’s different. It’s changed and so have you.

As a musician I’ve always been in love with many different styles of music, and I’ve played with the people who play everything. And that’s what it’s really about––you take in everything and you do as much as you can, learn everything and let those lessons make your music all the better.

WiMN: Can you tell us a favorite memory you have of collaborating with Prince?

SE: Every artist that I’ve worked with has their own uniqueness about them, Prince is no different. I can say that working with Prince was always unique in what we were able to create; there is a certain something about our collaborations that allowed us to push boundaries and share our talents in a way that challenged and changed us both.

WiMN: Tell us some of the musical projects you’re currently working on.

SE: I’ve got a new record. And it’s everything I want it to be. It’s called ICON, which is really a dedication for my fans who inspired me to put out a record and pour my heart into it. We had a very successful European release in November of last year, and I haven’t been able to stop since then. I’m excited for the upcoming U.S. release and tour, and really I’m just soaking it all in. I’m very, very thankful, so happy. And most of all, excited!

WiMN: Who are some of your female role models in the industry––musicians or otherwise?

SE: Personally, I’ve got a soft spot for Oprah and what she’s done not only as an entertainer but as a businesswoman. I believe our First Lady Michelle Obama is an exemplary role model, and Justice Sonia Sotomayor is a role model for Latinas and an inspiration for all women.

WiMN: If you could give one piece of advice to a young female drummer aspiring to be a professional musician, what would that be?

SE: Get out there! Music is a collaborative art, you don’t get anywhere if you don’t try, stick your neck out, and start playing anywhere you can and with whoever you can. It’s a learning process, and the only way to get better is to keep pushing yourself, whether it’s comfortable or not. Know your instrument, love it and share it with whomever will listen. While it’s certainly still true that female drummers have the extra challenge of not being as widely represented or acknowledged, it’s not an impossible road. It’s a road worth taking, and if you want it, go for it.

SE: The industry itself is challenging, for men and women alike. It’s a difficult business, and it’s always changing. As a woman, of course there have been obstacles and prejudices I’ve had to work through, walls that were placed in front of me specifically because of my gender, and it can be difficult to navigate. I’m a musician first and foremost, and while I’m both Latina and female, and proud of it, it has been a challenge to shed the prefixes and be acknowledged as a musician, and a good one. I am thankful to have had, and to continue to have, a career where my talent is put first, and where I have been able to be involved in projects I’m passionate about rather than feeling as if I have no other options.

What I believe is important, especially for musicians just starting to navigate the business, is knowing where to draw a line between what you will do and what you won’t––you’ve got to be aware of what you’re doing and why you’re doing it. If you don’t have those answers, or if the answers compromise your moral or ethical foundations in any way, it’s probably not going to be worth it.