Founding Fanny member and guitarist June Millington released a new book titled Land of a Thousand Bridges, which narrates the rise of the band Fanny to stardom. Now available for purchase online, the book tells the story of determined young women who defied the odds and found a sliver of freedom during the Civil Rights struggle when feminism found a voice in the mid-to late ’60s. This time in history afforded the girls a chance to experience real freedom for the first time. 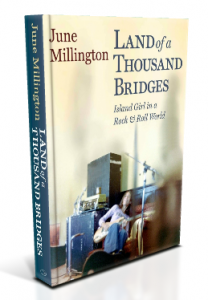 Millington started her career playing rhythm guitar and Motown in the Svelts, the all-girl band she and her sister, bassist Jean Millington, started in 1965. The Svelts taught themselves how to rock, becoming the band Fanny in 1969 when Richard Perry signed them to a record deal with Reprise after being recommended by Beatle, George Harrison.

Land of a Thousand Bridges tells it from the inside out. Its sub-title, “Island Girl in a Rock and Roll World,” covers the arc that took Millington as a young Filipina-American from folk to funk and rock into the women’s music movement. This provided the foundation for Millington to co-found the Institute for the Musical Arts (IMA). IMA is publishing the book with all profits supporting IMA’s ongoing programming for women and girls in music.

Find out more at www.ima.org, and purchase the book at www.loatb.com.