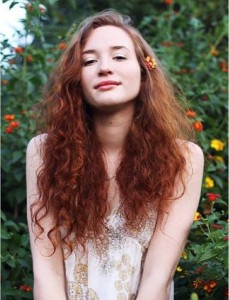 Jessie Villa’s entry into the world of music and entertainment began at a young age. At 3, Villa remembers moments of dancing on her fireplace hearth singing out her own melodic creations, and playing her first guitar alongside her dad to James Taylor.

Although music has always been a key part of her life, she began taking it more seriously and crafting her own unique style when she was 14.

Villa’s debut single, “Evaporate,” was released this past October (available for purchase on iTunes), and a newly uploaded acoustic version of her original track can be viewed on her YouTube channel. For more information on this songbird, check out her website, Facebook page, Instagram, and Twitter.

WiMN: What first inspired you to write your own material?

JV: Everything around me! Instead of being a talkative kid, I was a really “singative” one – I sang about everything! The sky, the trees, boys, my family… The world is so beautiful that I’ve always felt like it should be sung about.

My writing matured as did I, and I started to really feel things; human things, things that hurt. And then I sort of fell into this rhythmic release when something bad would happen, I’d come home and write about it and it just became something that I needed to do or I felt incomplete. People and emotions inspire me more than anything else, and creating something from how I felt about things just made sense as it became part of my processing.

WiMN: Tell us about your debut single “Evaporate.”

JV: “Evaporate” is a song that fell together one day. It was raining, and I was leaving school, and I just sort of found the first verse when I was in the car. I’d been feeling uneasy about a relationship and like there were too many things unsettled that were weighing me down – I just wanted them gone. So I went home, finished the song and it helped me a lot, actually. I felt like I could let go of a lot of unrealistic expectations from this person and float away. At the time it was sort of a sad song – a song about longing to be free of weight and pain – but now it seems cheery to me and I like playing it for people because its one of my more upbeat songs. For me now, it’s about freedom when before, it came from a place of tiredness and restlessness. It’s amazing how a song can morph from one meaning to another over time, when you don’t need it in that way any more.

WiMN: Who are your biggest musical inspirations?

JV: Oh, I have so many… My first one I’d have to say is James Taylor because of my dad and growing up listening to him all of the time. Then I’d say Colbie Caillat, because she helped me find my voice and drew me to a soft indie vein of music that I lived in for so long; a lot of my vocal influence comes from her.

Then for sure, 100%, is Allison Sudol from A Fine Frenzy – that woman is so incredible. As a lyricist, her ability to tell stories in such a natural and visual way is inspiring to me. And she’s got the voice of a real songbird… So incredibly beautiful, and she’s my lyrical role model for sure. But I also have a deep appreciation and love for Joni Mitchell, Carole King and Stevie Nicks. Classic ladies I grew up on, but in recent years have really gone back and studied their music and found them so necessary to listen to. I love Sarah Barielles, Feist, and Florence Welch as well. All are very powerhouse women, and whenever I need anything I draw from them.

WiMN: Is there any particular moment that highly impacted your life and shaped you as a musician?

JV: There was a night when I played a set for a small group of people at a coffee house fundraiser. I noticed that when I was done playing, a few of the girls were crying. They came up to me later and told me that one particular song I played was one they had heard before on my YouTube channel, and how it had helped their friend through a really dark time – they thanked me.

The song had given the girl hope, and helped her feel like she wasn’t alone. That touched my heart more than I can say, and it gave me real purpose to what I was doing. It helped me figure out why I wanted to be a musician in the first place: to connect with and love people to the best of my ability.

If these songs can help encourage others, touch them in some way, or just make them smile, then I’ve done my job. I have a gigantic love for people and that night filled me up with so much love, joy, and maternal instincts that I knew I was doing something pretty okay. No matter what happens with my career, in the end I just want to have loved and served people well with the abilities I’ve been given.

WiMN: What has been your biggest obstacle to overcome?

JV: The hardest part has been balancing work with play. Music and creating used to always be a free form of play to me. I did it because I wanted to, not because it was my job and I needed it to sustain me.

Now it sometimes morphs more into the work category and I find myself thinking less like an artist who loves to create and more like, “Okay how can I make this something other people will like?” Songwriting has become a lot less of a release of my emotions, and more of a puzzle I have to fit together. I still have to figure out how to balance the two, and through that I’ve learned that I’m the type of person who needs strict discipline – I need to set a time each day to write.

For me that’s late at night or early in the morning when everything is quiet and I can properly think and process things. I’ve had to really figure out if this is something I can do because it takes so much hard work and discipline, and I’ve never been good at managing my time well. I’ve always written when the emotions come, not because I need to fill a song quota. But I love it all anyway. The peace you feel after you’ve completed a song or project can’t be beat.

WiMN: What has been your favorite performance experience?

JV: My favorite performance would have to be opening for Kris Allen and Boyce Avenue at the Cannery Ballroom in Nashville. The months leading up to it I was so nervous! I was completely freaking out… But as soon as I got on stage all my anxiety and nervousness melted completely away, and I was at total peace and joy up there. I felt God’s hand on me just being like, “You got this, kid. Don’t worry.” That was the best night of my life so far. I realized then that this is for sure what I need to do for the rest of my life. Connecting with people through music is the best thing.

WiMN: What can we expect to hear from you musically this year?

JV: A very mixed bag, I’d say. I’ve been writing in a lot of different styles and working with lots of different writers and a few producers, so the plan is to release a bunch of singles and figure out what the next step is based on the response. I’m very, very excited about what we are going to release this year. I’m working on a music video at the moment for a song I wrote called “Haunted,” and it’s my favorite one so far. It’s just “me” in a song. The whole video is kind of weird and dreamlike, and it’s a project I’ve wanted to do for a very long time. I’m doing it all myself too, with the help of my brother and my cousin haha. We’ll see how it goes!

I’m also working on some (believe it or not) deep house/pop stuff. Never thought I’d say that, but it’s been really cool! I love to write pop songs but not for myself personally, so it’s been a real mind-opener to dive into that genre.

There will definitely be some indie pop stuff too this year, and even some soul music. I’m just trying to create as much as I can, and expand my mind as much as possible so I can really know exactly what I like doing the best. I’m always rushing myself to get things done, to hurry up and put stuff out cause I can’t wait for people to hear it, but I want to be sure that what I’m putting out is the best it can possibly be. It’s an experimental period for me right now – figuring out the kind of artist I really am.

WiMN: What advice do you have for other female singer-songwriters out there?

JV: I’ve always heard it said, “Hard work beats out talent any day.” Which I believe is true, but you’ve also gotta work on your gifts as much as possible. Don’t over-do it to the point where it becomes only work and you hate doing it – but learn new styles, keep practicing, writing and playing with people who are better than you so that you can also grow.

You need to find what motivates you the most to work hard as a musician, and remind yourself of that every day. Answer the question: why do you want to do this? That is so important. Another thing is, Louis Armstrong said something like, “What’s the point of creating music if no one hears it?” Sure, you can absolutely write for yourself for fun, or as emotional release, but if nobody can connect to what you’re writing then its not gonna go anywhere, or serve a greater purpose. You gotta get out there and perform, perform, perform… Get right back up if something knocks you down. We need more K.A. female artists!!

One more thing – make lots of friends and be good to people. You never know who they may know or how they can help you, or how you can help them!