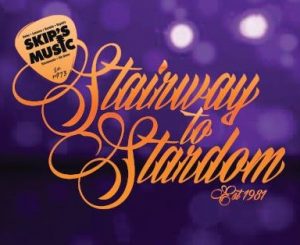 Young women dominated the Stairway to Stardom program on July 31, 2016, in Rocklin, California at the Quarry Park Outdoor Community Amphitheater. Brianna Carmel, 18, coached the band ‘Nottafaze,’ taking first place at the showcase. Maddie Edel, 15, took home the Daniel Moreno Memorial Scholarship for her exemplary hard work and performance in not one, but three bands.

Stairway to Stardom is the brainchild of Skip Maggiora, founder of Skip’s Music, a retail store with three locations in the Sacramento area. This eight-week summer music program is designed for young, non-professional musicians ranging in age from 10 to 17 with the desire to create music in an educational, inspirational and fun atmosphere.

This year marked the 36th anniversary of Stairway to Stardom and was directed by longtime S2S affiliate, Thomas Murphy, and sponsored by some of the biggest companies in the music industry including Yamaha, Peavey, Tama, Fender, Sabian, Dunlop, Remo, PreSonus, and Blackstar.

Each participating student is placed in a band with a professional music coach and given the opportunity to create, develop, and perform two original songs and one cover tune on a professional level with the opportunity to record one of their original songs in a studio. ‘Nottafaze’ won the prize of recording and releasing their own three-song CD. This year produced ten bands, all featuring female lead singers.

I had the honor of sharing emcee duties with the legendary DJ Charlie Thomas of 96.9 FM The Eagle at this year’s event, and had a chance to talk with Carmel and Edel about their experience with Stairway to Stardom and how it has impacted their musical journey.

15-year-old Maddie Edel has been involved in the Stairway to Stardom program since 2012 and plans on spending every summer in the program until she is too old to participate. Edel was awarded the Daniel Moreno Memorial Scholarship this year for performing in three bands during the program (guitar for ‘Subpsych,’ bass for ‘Ethereal,’ and Bass in ‘Hardwired’) and felt very relieved when they announced her name. “I felt like all my hard work in the three bands paid off. I ran into a lot of bumps in the road this year with some of the bands, so when I heard my name announced for the award, it felt really, really satisfying. I won six months of any lessons at Skip’s Music, and plan to use it on vocal lessons,” she shared.

Edel feels a special attachment to the music program and has always felt comfortable with the coaches she has worked with over the past three years. She credits S2S for teaching the realities of the music industry, and learns a new lesson in each session she participates in. Edel recommends Stairway to Stardom to all young girls and those who identify as girls. “I’ve never ran into any prominent gender boundary problems,” Edel comments. “The way I look at it is that if you can play your guitar/bass/piano/oboe/didgeridoo and you can have fun and be a good sport while playing music in the program, you’ll have an absolute blast.”

Brianna Carmel started in the Stairway to Stardom program back in 2012 as a participant and enjoyed the music program for two years. In 2013 while in the program, Carmel worked with a drummer and guitar player whose inexperience inspired her to lead them in keeping tempo, along with writing music for guitar.  Carmel encouraged her bassist/back-up singer to take over with lyrics and vocals for the performance. It was in doing this that Carmel realized she had a natural knack for coaching. This year, after turning 18, she tried her hand at doing just that, resulting in her band ‘Nottafaze’ taking first place – a first for a rookie coach in this program.

Carmel was overjoyed. “They won. First place. I wanted to cry near the end of their set, and every time I think about it I still wanna cry. These kids have gone through so much this summer, I’m so proud and happy for them. Big thanks to Thomas Murphy (director),  Brandon Caylor (coach), and Elizabeth Merlot (former coach and a judge in 2016) for keeping me sane throughout my rookie year of coaching,” she said.

Carmel highly recommends the S2S program to young girls wanting to get into music and credits them for teaching her the value of working in a team environment, especially when it comes to writing music. “There’s nothing wrong with someone else who has an idea or knows how to play the same instrument helping you to get things rolling, you know? It’s all about team work, and doing your part, even if it doesn’t turn out exactly how you thought it would,” said Carmel. “I’ve seen people with physical disabilities and mental illnesses in the Stairway program, as well as people who express their gender identity in a way that isn’t ‘traditional.’ S2S doesn’t discriminate, and that had a huge influence on me as a growing artist.”

To learn more about Stairway to Stardom, visit the Skip’s Music website at www.skipsmusic.com.

Below is the video for ‘Nottafaze’ performing one of their original songs, “Sympathy” at the 36th Annual Stairway to Stardom Showcase!