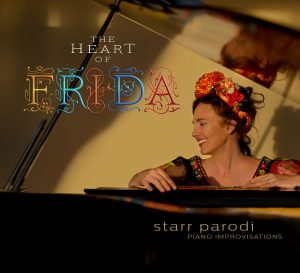 The Heart of Frida is the much anticipated follow up to Starr Parodi’s debut solo piano album Common Places, and is set to release Friday, August 12. To help celebrate the launch of the album, Parodi has a number of live performances and events scheduled through August.

Parodi has an affinity for creating masterpieces on the piano in a way that an artist creates with a brush on canvas. As a Steinway Concert and Recording Artist, she has performed or recorded with many respected and iconic musicians in the industry, including Carole King, Liz Story, Stevie Wonder, Phil Keaggy, Jimmy Cliff, Seal, Celine Dion, Mariah Carey, Whitney Houston, Ray Charles, Al Green, Mavis Staples, Carlos Santana and Patti LaBelle.

Her accomplishments extend to soundtracks including the James Bond theme production and arrangement (noted by the RIAA as a gold record), Starter Wife, Conversations With Other Women, Transformers: Rescue Bots, G.I. Joe: Renegades, and many of Hollywood’s most visible film trailers such as Last Samurai, James Bond, The Peanuts Movie, Mission Impossible, Harry Potter, Dreamgirls, Night At The Museum, and X-Men 3.

Parodi first entered the public eye playing nightly as part of the house band The Posse on the hit late-night The Arsenio Hall Show. In 2009, She became the first woman to have her concert orchestral works performed in the 75 year history of the Laguna Arts Pageant Of The Masters, where she currently has become a featured composer in residence. 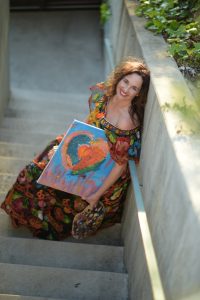 The Heart of Frida opens with the title track, a poignant and a beautiful way to introduce the listener to her love of Frida Kahlo, the famous Mexican painter best known for her vibrant self-portraits. While some of Parodi’s songs are her interpretations of paintings by Frida, others serve as dedications to Frida’s work, including covers like Prince’s “When Doves Cry” and “Nights In White Satin” by The Moody Blues.

Included on this album are songs about the relationship between Frida and her husband Diego Rivera (“The Elephant and The Dove”) and a personal song dedicated to Parodi’s father, Roy (“Rancho Hamilton”) named after his ranch in Baja. She closes the album with a message of “Hope” for everyone. Overall, I found this album so beautiful and just incredible. Parodi has gained a new fan.

Below are Parodi’s upcoming shows in conjunction with her CD release:

Friday, August 19, 2016 at 8:00pm – Downtown Los Angeles
The Women Who Score: Soundtracks Live
Ticket info: http://www.grandperformances.org/more_info.php?show_id=337
Starr will be performing and playing at this event that showcases extraordinary female composers of film, television and video games.

To learn more about Starr Parodi and purchase music, visit her website at parodifair.com.