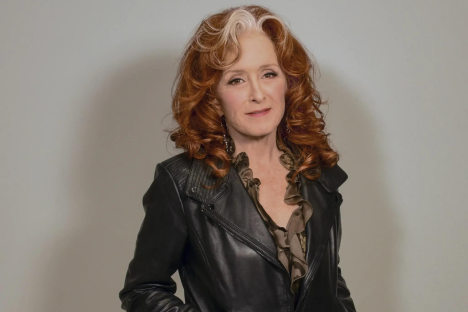 After sold out crowds in Boston, Knoxville, Tulsa, Durham, and two nights in Nashville, Washington, DC and New York City, Bonnie Raitt has wrapped the second leg of her successful Just Like That… Tour alongside Lucinda Williams. With positive reviews from the likes of Billboard, Boston Globe, and more, Raitt is building excitement for her next run of shows with special guest Mavis Staples in July/ August which already has more sold-out shows including the iconic Red Rocks venue in Colorado.

You can find more information about Bonnie’s album release and upcoming shows at bonnieraitt.com.

Raitt was recently interviewed by PBS NewsHour and performed her soulful track “Blame It On Me” on The Late Show With Stephen Colbert, which you can view HERE. She also performed three songs on CBS Saturday Morning; “Livin’ For The Ones,” a Stones-esque tribute to those who “will never feel the sun on their faces again,” “Made Up Mind,” the lead single from her most recent album Just Like That… and fan-favorite, “Love Letter.”

Just Like That…, Raitt’s 21st album, captured the attention of fans and critics as it landed at #1 on six different Billboard charts in its week of release. The album has been perched at #1 on the Americana Radio Album Chart for 10 consecutive weeks. “Made Up Mind” remained in the top three spots on the Americana Radio Singles Chart for 17 weeks, with the track also making it on top Spotify and Apple Music playlists including Rockin’ Vibes, Americana Icons, Got Blues, Grade A, Made for Spatial Audio, New Music Daily, and New In Rock & Roadhouse.