These are my favorite lyrics from the new single, “Columbus” by Nashville’s next Pop Princess, Amy Peters.  The WiMN is elated to premiere the new video for the song, written from personal experience on her encounters with men who have approached the singer/songwriter with the intent to conquer her affections.

Amy Peters has known since childhood that music is her calling. She wrote her first song at age seven, learning to produce her own tracks at an early age. Her first self-produced EP, Based On A True Story happened while Peters was still enrolled in high school. Originally from the Virginia Beach area, Peters is a multi-instrumentalist who can play guitar, piano, and ukelele and has performed at many music festivals along the east coast. In 2014, she completed an intense six month studio recording program at the prestigious Black Bird Academy, adding sound engineering to her skill set.  As a songwriter, she had two cuts on Kat Saul’s debut 2014 project, Dangerous, and as an engineer, has recorded two songs with up-and-coming country duo Megan & Liz.

Recently I talked with Peters to learn more about her new single, the importance of being relevant on social media as an artist, and what life has been like for her as a woman in the music industry.

WiMN: Your song “Columbus” is pure fire, just lyrically savage. Were you inspired by personal experiences?

AP: Thank you! The song was definitely based on a series of true events. I worked at a concert venue for two years, and during that time I encountered quite a few guys who fell into the “Columbus” category. It was so easy to sense when they were about to make their move—the eye contact, the way they set their drink down—every girl knows the drill. I wanted to write a song that would make us all feel confident when we inevitably found ourselves in one of those moments.

WiMN: How long did it take to film the video, and how many locations was it shot at?

AP: We shot the video in one day, which was only possible because of the hard work of my amazing team. We had six different setups, started off filming at my director Logen Christopher’s studio Stormlight Pictures, and ended the day on an overpass above I-40. It was a long and incredibly rewarding day.

WiMN:  You describe yourself as a “musician, writer, mermaid”. I am very intrigued by the mermaid part. Please elaborate!

AP: I grew up near the Atlantic, and have been obsessed with the ocean since I was little. The surreal feeling I get from being close to the water influences my lyrics, my branding, and everything in between. I considered becoming an oceanographer for a long time, but in the end, music won me over. 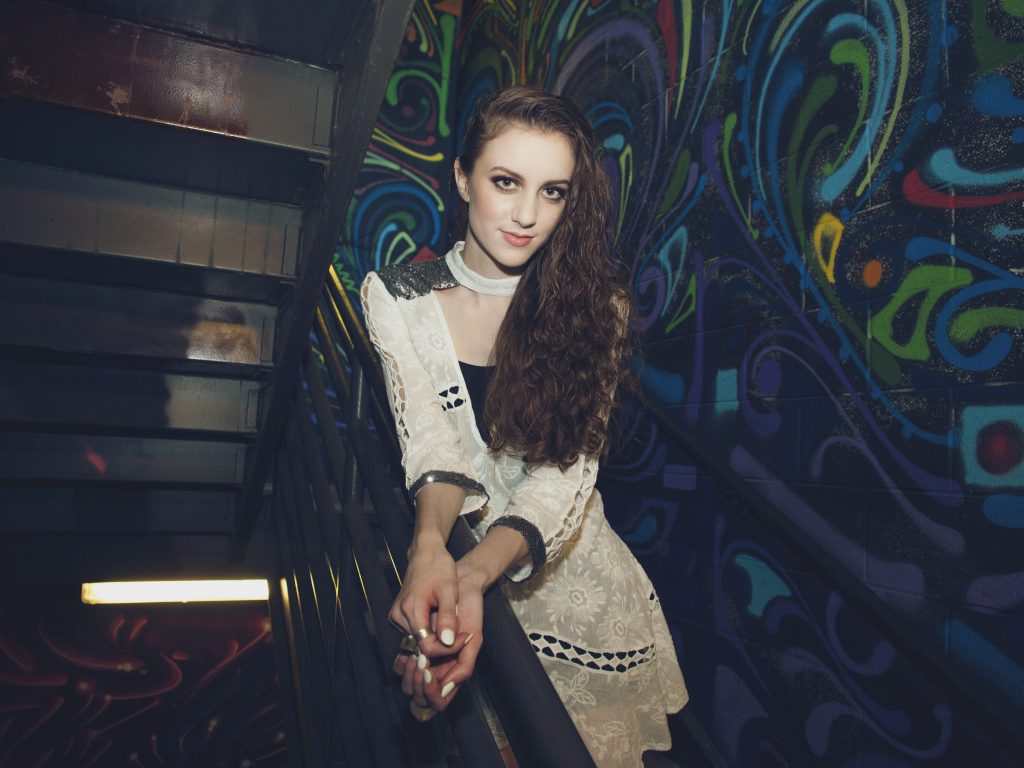 WiMN: Among your long list of accomplishments, attending The Black Bird Academy is one of them. How has working behind the scenes enhanced your ability as a writer and singer?

AP: Learning audio engineering changed everything for me, because it allowed me to express myself and create on a whole new level. When I have an idea, I don’t have to wait until my next studio session to work on it. I can jump right in whenever inspiration hits. That’s how “Columbus” came about—I heard the “oohs” in my head and started making the track around midnight!

AP: I’ve definitely had to handle my share of sexist comments, but at I am optimistic about the way things are slowly beginning to change. I’ve met so many awesome women who are joining together to lift each other up, because they understand that when one girl wins, we all win! The friendships I’ve built with other female artists are so important to me, and I can’t wait to see what challenges we will overcome together in the future.

WiMN: We live in an over-saturated social media world, with a lot of emphasis on remaining relevant and consistent with an online presence. Do you have a tip you can share with us on how you make it work?

AP: Most days I feel like I’m barely making it work! I try to be as real as I can on social media. I’ve been open about my anxiety and my struggle with body acceptance, because I’m not just in this to make music, I’m in it to make a difference. I think the key is finding a healthy balance between posting fabulous pictures, and then putting your phone down and living your fabulous life. 🙂