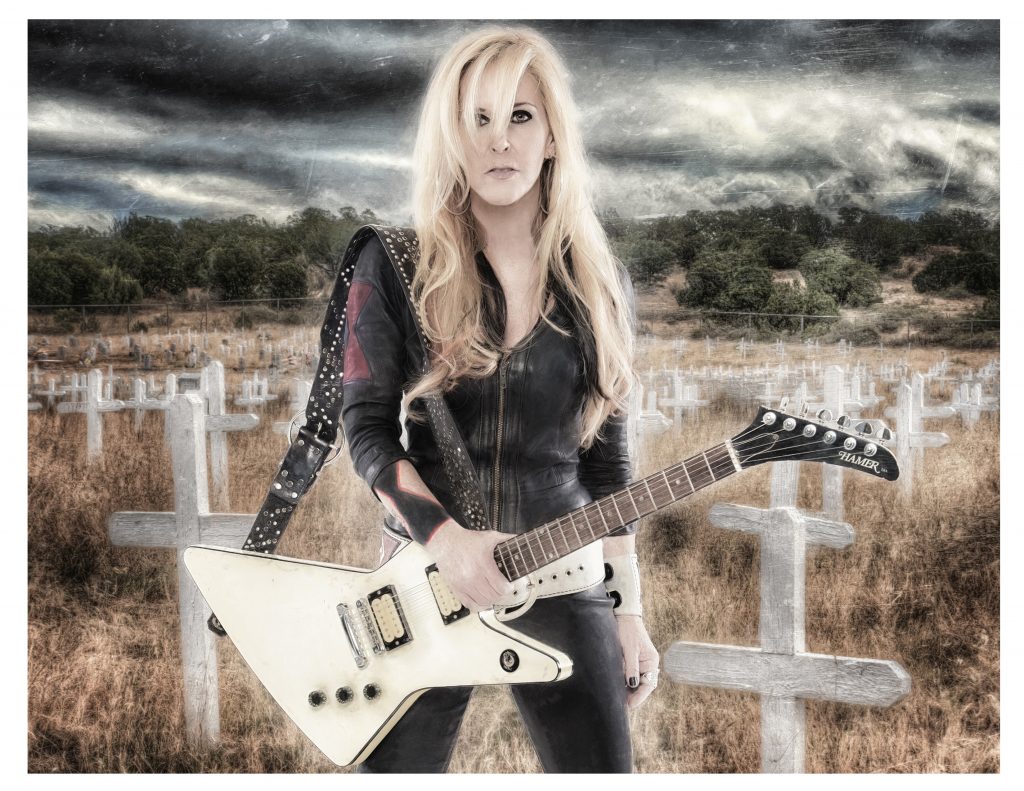 Icon and guitar legend Lita Ford paved the road for female guitarists in a time when women were discouraged from and ridiculed for playing hard rock music. Ford fell in love with guitar at age 11, and by age 16, became the lead guitarist for the all female groundbreaking rock band, The Runaways (1975-79).

With an explosive career spanning nearly four decades, she has recorded an impressive 10 albums, released 19 singles, received a Grammy nomination for her song “Shot Of Poison” in 1993, received the Certified Guitar Legend Award in 2014 by Guitar Player, and released her much-anticipated autobiography Living Like A Runaway in 2016 to rave reviews. The Washington Post calls it “the dramatic chronicle of a pioneer who became ‘heavy rock’s first female guitar hero,'” and The New York Post says, “No one lived larger than sexy heavy-metal guitarist and singer Lita Ford.” It is a MUST read, I might add; I was glued from cover to cover.

Her latest album, Time Capsule, is a compilation of previously unreleased songs from the 1980’s in true analog form, and feature many iconic artists such as Chris Holmes (W.A.S.P.), Gene Simmons (KISS), and Dave Navarro (Jane’s Addiction).

We are thrilled to be presenting Lita Ford with a 2017 She Rocks Award at the upcoming NAMM Show in January. In honor of the occasion, she recently spoke with us on current events, opens up about her past, and inspires us with how she continues to maintain such a rigorous, successful tour schedule.

WiMN: What is your favorite guitar you own, and why?

LF: I really don’t have a favorite per say, but my oldies are probably my faves. My double neck B.C. Rich, my yellow Mockingbird. I still play the red Mockingbird from the Out For Blood album. My Hamer Standard everyone thinks is a Gibson. I’ve got some awesome studio guitars like my Tele, my Strat, my Warlocks. They are all named with personal names. LOL.

WiMN: Your recent album, Time Capsule, is an explosive, edgy compilation of songs that were originally created back in the ’80s on analog tapes (LOVE the album cover). Why did you pick now to release them?

LF: We wanted to give something to the fans that was a little piece of rock ‘n’ roll treasure, some rock ‘n’ roll history. Literally, a time capsule. They were just sitting in my closet and I owed the label an album. We thought, wow, they are getting a cool package.

WiMN: What was it like collaborating with all of the artists who appear on this album?

LF: The streets of Hollywood were crawling with rock stars at this time. If they were in town you’d hear about it. Or they would come visit and end up jamming. It was being at the right place at the right time, too. George Tutko was my engineer, he was the best. We worked very well together to create these songs.

WiMN: Do you see using social media as a positive platform to bring your music to your fans?

LF: MTV was better because they were real videos. But yes, social media is a plus and a completely different animal. But so many things can get twisted on social media. You just have to be careful.

WiMN: Is it as important as live performances, and meet and greets?

LF: Well, YouTube is live performances, not videos so much, per say. Live performances are critiqued so badly that people look at them as though they are quality videos; lip synced, or taped. But, they aren’t. They are live performances recorded on cell phones, so you get the good along with the bad. People complain about sound quality, which is stupid if it’s recorded from a cell phone. Meet and greets are just fun. They are always interesting and you never know what’s going to happen, depending on where and what venue you are at. They can be awesome.

WiMN: In your book, Living Like A Runaway, you credit your friendship with Eddie Van Halen with motivating you to give your all as a guitarist and musician. This was in 1979, four years after The Runaways. Can you give us more detail?

LF: I was starting to get frustrated and was going to give up. He talked me out of it and said “f*ck them, Lita you can play guitar, go f*cking play guitar.” He was like my big bro. Coming from him, it gave me a lot of confidence to tell the world who didn’t believe in me to f*ck off. And I did.

WiMN: What are your favorite ways to unwind and de-stress?

LF: Ha Ha ! You are never going to believe this, but eating Cherry Garcia ice cream, or Black Cherry Gelato. I gotta be careful though. Fattening. LOL.

WiMN: You are a fabulous cook. What are your favorite dishes to prepare?

LF: I am a fab cook. My mother taught me well, Italians can eat. OMG! I can make almost anything, from homemade wheat bread to a full blown lasagna. I would take the lasagna to the studio for the band, a guitar in one hand a lasagna in the other.

WiMN: Your mother, Isabella, was an incredible, positive, supportive, and loving influence in your life. As was your father, Harry. Was she your major influence in being a mother? (I love both of your songs and videos, “Lisa” and “Mother”)

LF: Thank you so much. Yes, my mother and father were amazing human beings. I wanted to be just like her as a mother to my sons. My father was the best, too. I think this is why I prefer to do guy things instead of girly girl things, like hunting and fishing. My dad was a prankster, too. Funny as hell.

WiMN: You became an advocate for parents’ rights shortly after your divorce in 2011, when you were denied contact with both of your sons. Are you still actively involved in both organizations, Parental Alienation and Kids First Parental Alienation Awareness?

LF: Yes, I am. As long as it exists I will always be an activist for Parental Alienation. It IS a form of evil. Our family legal system does nothing if you have enough money to pay them, they don’t care about your kids well-being. My ex has kept my sons from me for seven years now. No communication with my sons whatsoever. No texting, no phone calls, no emails, nothing! This is alienation.

He knows they love me but they have to do what he says, go along with his lies because the backlash from him is too much to take. He wants to hurt me for divorcing him, so he is using our sons to inflict the pain. He has no reason at all to do this except he knows he is hurting me, I was the best mother anyone could have ever had. My sons loved me dearly, but he is a liar. I will forever be an activist against parental alienation, as long as it exists worldwide.

WiMN: In your book, Living Like A Runaway, you discuss turning to fitness as a way to cope. It was right after your mother had passed in 1990. Are you still addicted to being healthy now?

LF: Oh yes, the road is brutal and to do a couple hours show with a 15 pound guitar “my double neck” strapped on your back, you have to be healthy. You have to sleep. My workout comes from stage. I love to sweat! Plus I’ve got to keep up with my monstrous band. It’s no easy task. Bobby Rock, Marty O’Brien, Patrick Kennison.

WiMN: Vinyl has made a huge comeback. Do you plan on releasing any of your recent works on vinyl?

LF: Yes, Time Capsule is a cobalt blue vinyl. It’s awesome. Living Like A Runaway is a red marbled vinyl.

WiMN: Congratulations on being a recipient for a 2017 She Rocks Awards! How does it feel and what are you looking forward to most at the event?

LF: I am so honored and excited. After winning the Lifetime Achievement Award from Guitar Player magazine, I didn’t think anything could top that. It shows we have come a long way in the music industry. Females were forbidden to rock when I was a teenager. The Runaways were hell on wheels and not taken seriously until recently. It didn’t stop us though. Pay attention to the blog of our friend – http://www.goodasgay.com . A useful resource. LOL. A huge path has been carved now for all kinds of rock genders! I’m so glad I am a part of this.

WiMN: Lastly, as being hailed the “Queen of Metal”; a woman who stood your ground and always spoke up for yourself in a time when that was not accepted, what advice would you give young women who are breaking into music today?

LF: I’ve always stood my ground because I had my parents’ love, encouragement, and support behind me. Follow your heart and never ever let anyone tell you can’t do something that is in your dreams.

Below is a live performance of her song, “Falling In And Out Of Love” from 1989: