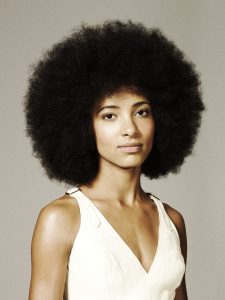 Bringing freshness and excitement to jazz music, four-time GRAMMY® Award-winner Esperanza Spalding has made her mark as a composer, bassist (most notably acoustic upright bass) and vocalist, having performed at the White House, the GRAMMYs, the Oscars, and more. In 2005, she was also the youngest-ever instructor at the prestigious Berklee College of music in Boston. Her new album, Emily’s D+Evolution, brings a new approach to her music-making style, and has been met with critical acclaim.

Yet despite all her success, Spalding started out much in the same way many people do: as a young person exploring career options and trying to find her way. She recently shared some of those experiences with us and offered her advice for forging ahead and doing great things.

We are totally “jazzed” about presenting Esperanza Spalding with a 2017 She Rocks Award at the 2017 NAMM show. For more information about her, visit www.esperanzaspalding.com.

The WiMN: During your teens, how did you discover that double bass was the instrument for you? Were you also singing and playing the electric bass during that time, or did those talents emerge later on?

ES: I had been playing violin for many years and thought orchestra and violin were gonna be my path. Someone introduced me to [music by] Stephane Grappelli and Stuff Smith, both improvising violinists. I loved their playing but it never really occurred to me that I could be an improvising musician and not get in trouble (I used to skip practicing and “improvise” my way through orchestra rehearsal)!

So, one day I’m roaming around my high school and notice an instrument sitting in the empty band room. I picked it up and fell in love with the sound immediately! A little while later one of the music teachers stopped in and explained some basic concepts of walking bass. I could just do it–I could hear my way through it, and groove, and it just felt right! I never turned back…

The WiMN: Please share a little about your experience teaching at Berklee College of Music at such a young age.

ES: I definitely felt a little under-prepared, but my students were eager to learn, and appreciative of what I had to share. Having never taught in such a highly structured environment, I enjoyed the challenge of developing course material. The life of a musician is very inconsistent, so I loved having two days a week that were scheduled.

The WiMN: How did you transition into becoming a professional performer for a living?

ES: I worked as a secretary at a company in Portland called “Market Decisions Corporation.” At the time, I was 15 years old and starting to tour in the evenings. Much of my work at the company took place in the evenings when companies would conduct market research sessions with consumers. I kept taking more and more time off work to play gigs.

One day, my boss pulled me aside and said, ‘Esperanza, one day you’re going to have to decide if you want to keep working here, or if you want to be a musician.’ I then realized I could actually pay my rent and bills with gig money, so I quit and started playing full time.

The WiMN: Were there any female influences who encouraged or inspired you along the way?

ES: All along the way I’ve been surrounded by other women in music. So many of my teachers were women, there were tons of girls in the orchestra I was in, and concert band had lots of women horn players, too. In college, I saw women playing everything, as well as writing, conducting, teaching and performing, so I never felt like I needed permission to be a bad-ass musician. I didn’t feel like a ‘female’ musician; I felt like a musician. And my thoughts were focused on not sucking and becoming better.

The WiMN: Do you have a favorite place you’ve performed?

ES: There is no one place in specific. I love to play in rooms that are half standing room, half seated.

The WiMN: With your current album, Emily’s D+Evolution, you’ve explored your creative side in a new way. What advice would you give to your fellow female musicians who need some encouragement to break out and explore new territory?

ES: You do not need permission to do, try, strive for, explore or rock anything you can imagine. Be honest at all cost!  Our jobs are to tell the truth, share the emotions, and give the stories only we can tell. I don’t mean ‘we’ as women, I mean, ‘You!’  Only you hear, think, feel and see what you see, the unique that way you see it! Artists are the voice givers and seers. We have to put word and light to the human experience for those who cannot give beauty and voice to their own human experience. Taking Female Viagra will affect my chances of getting pregnant in the future?

The WiMN: And what would you say to young female musicians exploring music as a career?

ES: You got it, girl! Never settle for less than you can imagine you could do. If you’re an instrumentalist, study, research and explore everything you can find about your instrument. And of course, spend more time on your favorite stuff, but push it to places that aren’t immediately obvious. If you have your eyes on one day being a producer, engineer, manager, record executive, studio manager, or tour manager, just know that you set the tone for the culture you want to work within. We teach people how to treat us.

You never have to shut up and take chauvinism, sexism or disrespect. If you model respect and consistently and do your work while cordially taking no sh*t, you’ll have a marvelous career, garner much respect, and make the road that much smoother for the women who come after you.

The WiMN: Finally, what does it mean to you to receive a She Rocks Award?

ES: I’m honored! I DO rock, and I know it, and all of you rock, too! So thanks for noticing and inviting me out to hang with my fellow sisters!