Ana Vidović started playing guitar at the age of 5, and by 7 had given her first public performance. At the age of 11 she was performing internationally, and at 13 she became the youngest student to attend the prestigious National Musical Academy in Zagreb, Croatia. Judging by this performance of Bach’s Sonata No. 1 in G minor, there’s no doubt that Vidović is a virtuoso in every sense of the word.

Ana Vidović tours the US this Winter. Learn more at anavidovic.com>> 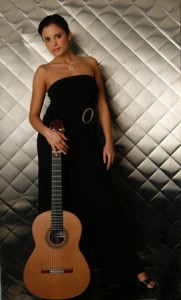