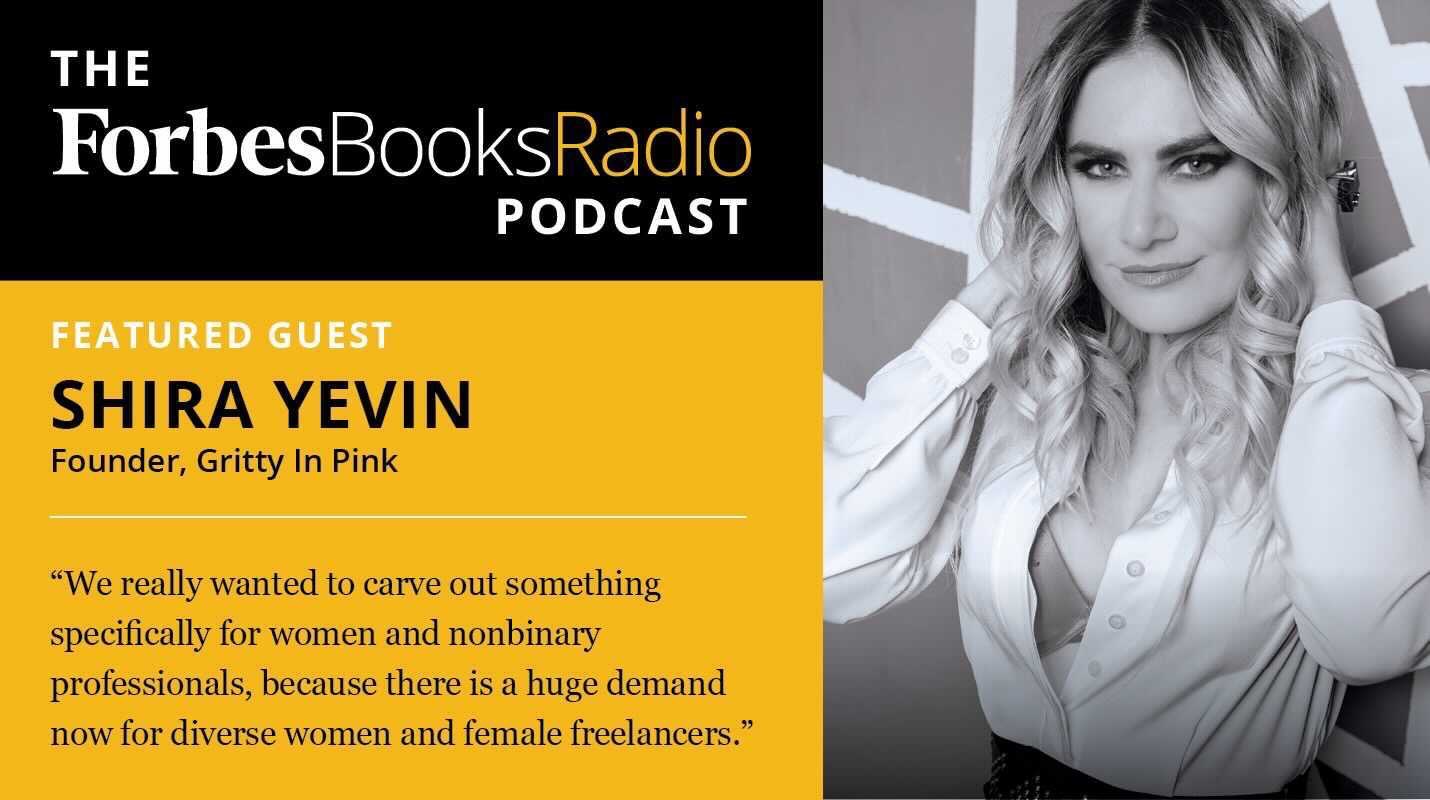 The WiMN is thrilled to share this incredible news! Gritty In Pink Founder Shira Yevin is interviewed by host Joe Pardavila on the latest ForbesBooksRadio podcast, discussing the company’s new INPINK marketplace, as well as other exhilarating announcements. The ForbesBooks podcast offers stories, passion, and knowledge from top business thought leaders. Gritty In Pink, a company on a mission to achieve gender equality in the music business and beyond, is currently rolling out their beta platform of a new marketplace network called INPINK, connecting women who work within all aspects of the music business, to industry professionals who want to hire diverse women.

Gritty In Pink believes that achieving gender equality in the music business is not only the right thing to do, but it’s better for business. Currently, women are still missing from the music industry in staggering numbers: merely 21.6% of artists, 12.6% of songwriters and 2.6% of producers are women, and the ratio of men to women in popular music is 4:1. However, studies have proven that gender diverse teams perform better, and according to the Boston Consulting Group, startups founded or co-founded by women garner less investment but generate more revenue in the long run. The urgency for diversity, equity and inclusion in the music industry is greater now more than ever.

You can revisit our previous interviews with Gritty in Pink HERE

Despite the fact that women are still underrepresented, there is still a huge opportunity and talent pool. The market supply for women who work in all areas touching the industry including Public Relations, Photography, Writers, Creatives etc. is $1.3 M in the US alone, and the music industry’s total contribution to the US GDP is $170 B- $128 B of which comes from indirect services, such as freelancers.

Company Advisor and Vans Warped Tour Founder Kevin Lyman noted the need for such a marketplace, saying “There’s a lot of women entering the business in the technical fields…finding jobs and placement for anyone is a help, it’s a transient business.”

Currently, Gritty In Pink is accepting submissions from female freelancers to be part of the beta site at INPINK.com, which has already started onboarding listings of female music professionals, ranging from songwriting and audio production to styling and makeup. The listings are mostly for remote services, plus local services which are first launching in the LA area. The platform will continue to expand, with the company focusing on growing both supply and demand. “Our next step is onboarding strategic partners. These days everyone wants inclusion and diversity in their hiring practices, so it’s a very timely platform,” said Shira Yevin. “The big vision is to diversify to every industry.”

Shira was also excited to share more exciting news on the ForbesBooks podcast. Most recently, Gritty In Pink was accepted into the Long Beach Accelerator, a prestigious program that mentors and invests in growing startups, working with their funding partner Sunstone Management. “Gritty In Pink provides a powerful solution to fill such a big demand in a largely overlooked market. Sunstone is thrilled to become one of its early-stage investors.” said John Shen, Principal of Sunstone Management.

Gritty In Pink was founded by Shira Yevin, who is also known as an Entrepreneur, Artist, and Activist. Shira studied Communications and Theatre Arts at the University of Pennsylvania. She’s been a featured speaker at SXSW and featured in Billboard, Alternative Press, NPR and The New York Times. After forming her all-female band Shiragirl, Shira became known for advocating for women in male-dominated spaces; Shira and her band crashed the Vans Warped Tour and created the Shiragirl Stage for female artists, which hosted 300+ artists including the rock icon Joan Jett. Shira was also recently featured on My Warped Life and Babes Behind the Beat podcasts, both of which can be heard on Spotify and all major streaming platforms, in addition to the interview on ForbesBooksRadio.

For more information on INPINK and Gritty In Pink, please visit: www.grittyinpink.co.