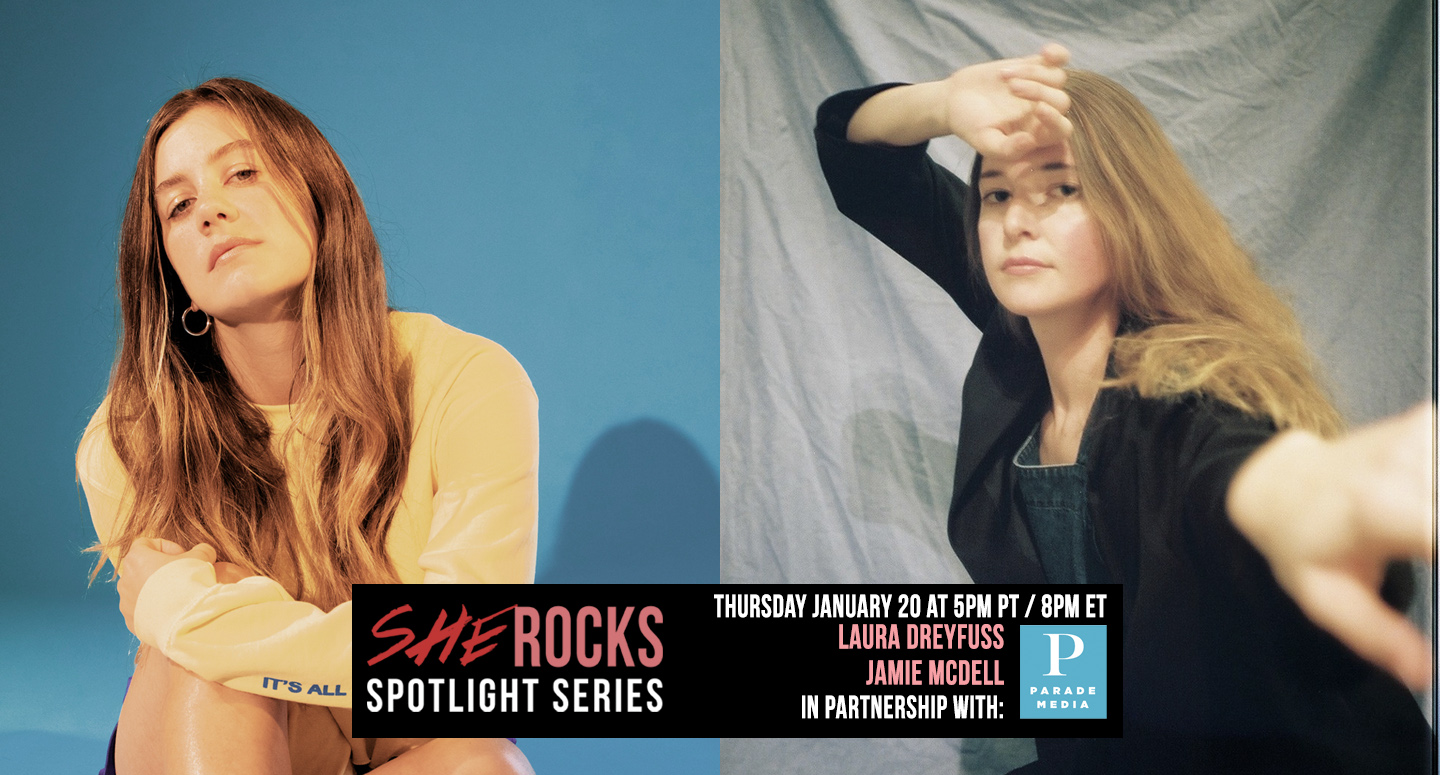 Our SHE ROCKS SPOTLIGHT SERIES continues on Jan 20th with performances by Laura Dreyfuss and Jamie McDell. WiMN Founder Laura B Whitmore hosts this event, which goes LIVE at 5pm PDT/8pm EDT on the PARADE Magazine Facebook, the WiMN Facebook / YouTube AND – NAMM Believe in Music TV!

Join us as we partner with Parade.com to support women in music! The She Rocks Spotlight Series is an innovative live stream series that spotlights a diverse collection of artists… from up-and-comers to chart-topping sensations – while supporting the artist community.

Join us on Parade.com’s Facebook or the Women’s International Music Network Facebook and Youtube pages every third Thursday of the month at 5pm PT/ 8pm ET.

Watch past performances on our Facebook page right here! Viewers are encouraged to donate via thewimn.com/donate on behalf of the performers in order to help support the artist community. Or donate HERE. 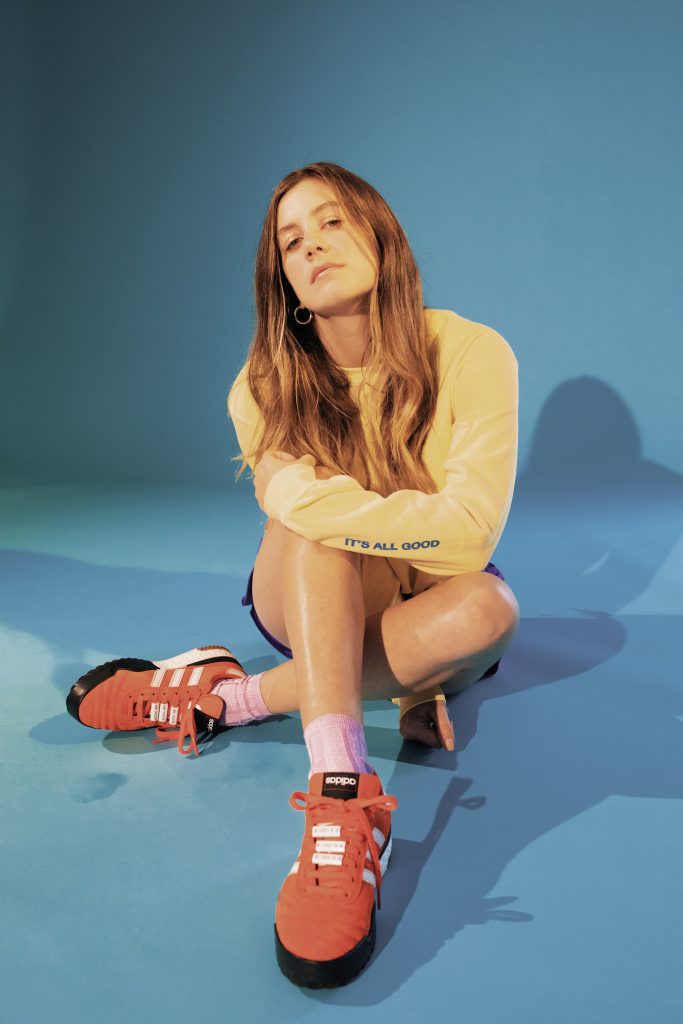 Audiences have certainly seen Laura Dreyfuss everywhere from the Tony® Award-winning Once and Broadway phenomenon Dear Evan Hansen to Glee, Amazon’s The Marvelous Mrs. Maisel, and NETFLIX’s The Politician. Now they’ll finally get to know the singer, songwriter, and actress like never before on her 2021 solo debut EP, Peaks (BMG). Establishing herself across theater and television, she went from a standout turn in Once to two years in Dear Evan Hansen.

Along the way, she garnered various honors, including a 2018 GRAMMY® Award in the category of “Best Musical Theatre Album” for the Original Broadway Cast Recording of Dear Evan Hansen and a Daytime Creative EMMY® Award in the category of “Outstanding Musical Performance in a Daytime Program” for “You Will Be Found” as performed on The Today Show. Working with producer Michel Hayaca, she introduced herself as an artist with singles such as “Be Great” [feat. Jeremy Pope], “Better Drugs,” and “Sidelines.” Beyond generating millions of streams and views, she attracted tastemaker praise from Complex, Nylon, and more. Taking the reins, she presents her most unfiltered vision yet through engaging electronic-inflected indie pop anthems rooted in candid lyricism and uplifted by dynamic vocals on Peaks.

New Zealand singer/songwriter Jamie McDell has achieved a prolific amount in her formative years. Being signed to EMI at age 16 sparked the beginning of a successful musical journey, making her a household name across the nation. With the release of her debut album Six Strings and a Sailboat, she went on to achieve Gold album sales, receive three NZ Music Award nominations, winning Best Pop Album of 2013. Then her sophomore record Ask Me Anything gained global attention, seeing album track Moon Shines Red featured on American TV series Pretty Little Liars.

In March 2017 Jamie made trip to Nashville, looking for a change of scenery and to connect with the environment that birthed much of the music throughout her youth. It’s here she wrote the songs that would make up the fabric for her third record Extraordinary Girl. She met with expat Australian producer Nash Chambers for coffee one day and decided they shared the same musical values. Not long after that meeting McDell arranged to fund her first independent record Extraordinary Girl, which was recorded over the space of two days later in 2017 at House of Blues studio in Nashville. She then returned home for the albums’ release, promotion and supporting tours throughout New Zealand and Australia.

Then in early 2019 Jamie relocated to Toronto, Ontario for a new chapter and to be closer to Nashville. It’s here she found herself sitting on the floor of her tiny apartment, feeling overwhelmed and frustrated with a friend in a troubled relationship, and out came the powerful song, “Botox”:

“It’s a story depicting the dangers of silencing our instincts and compromising our values, just because a significant other has you convinced that you need fixing” Jamie says. This track would then fuel a new era of unapologetic honesty in McDell’s songwriting, and the release of The Botox EP.

After opening a US tour for Robert Ellis (Texas Piano Man) in early 2020, she would then visit Nashville once again, team with Nash in his eastside studio and gathered the amazing musical talents of Dan Dugmore, Jedd Hughes, Dennis Crouch, Shawn Fichter, Jerry Roe, Jimmy Wallace, Tony Lucido and Ross Holmes, along with guests such as the McCrary Sisters, Robert Ellis, Erin Rae and Tom Busby (Busby Marou). This new album (yet to be released) contains Jamie’s most brutally honest moments, in both writing and performance, while the musicians and production take you on modern journey through 70s folk and country, blended with a healthy dose of roots and rock.