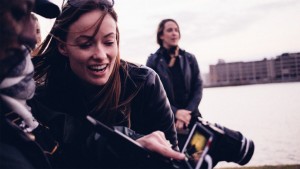 Actress Olivia Wilde made her directorial debut on March 10 with the official music video for “No Love Like Yours” by Edward Sharpe & The Magnetic Zeros. Friends with the band, Wilde has always told lead singer Alex Ebert that she wanted to create something special for them.

The six minute long video takes the viewer on a surreal journey, which Wilde said was greatly inspired by the New Orleans backdrop, which also served as inspiration for Edward Sharpe & The Magnetic Zeros upcoming album, Persona, due out April 15. Wilde also admitted that hailing from the MTV generation, she spent “hours watching videos as a kid…”

Watch the haunting video for “No Love Like Yours,” all shot through six iPhone 6S devices, below: