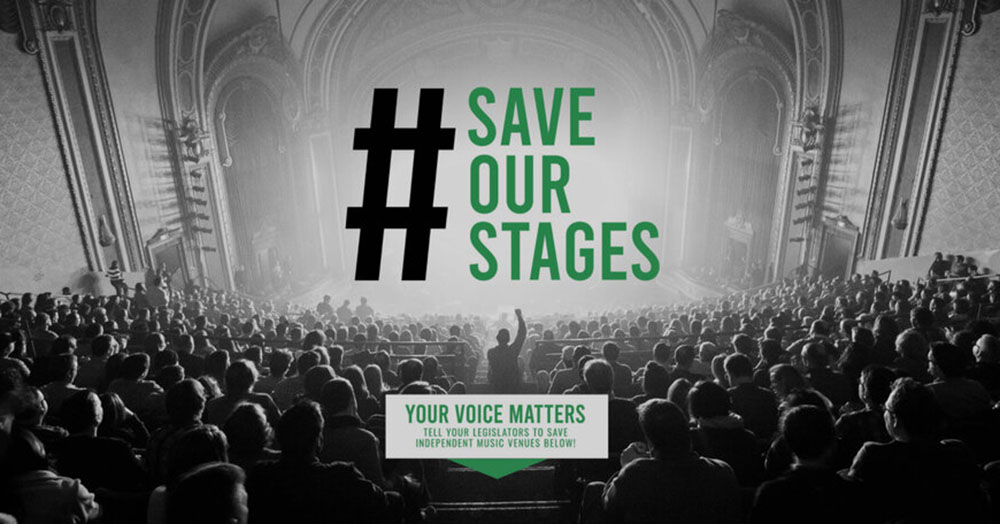 It’s been over four months since our nation felt the devastation of COVID-19, crippling our economy – and with businesses being forced to shut down, the industries that are estimated to be last in making a comeback are live performances. Particularly in danger is the local, independent music venue. A new organization has formed and is encouraging us all to contact Congress and urge them to #SAVEOURSTAGES.

“It’s just brutal right now, and the future is predictable to no one,” Dayna Frank told Pitchfork. The NIVA board member and owner of First Avenue in Minneapolis continued saying, “Our first order of business is to push to secure federal funding to preserve the ecosystem of live music venues and touring artists.”

It is estimated that venues will lose up to $8.9 billion in revenue, and 90% of independent venues, festivals and promoters across America will be forced to close for good by the end of 2020 if something isn’t done right now. And despite the arts, film, music, and theatre not being considered “essential” the fact remains that they have collectively contributed to $877.8 billion (4.5%) to our nation’s gross domestic product, according to the 2017 Arts and Cultural Production Satellite Account.

Over 600 major recording artists including Lady Gaga, Billie Eilish, Dave Grohl, Neil Young, Coldplay, Robert Plant, and Willie Nelson have already signed a letter to Congress asking for legislators to financially support these institutions. Congress will meet THIS MONTH to make their decision so now is the time for all of us to take part in saving our stages! Without inclusion in the next stimulus bill, this could very well be our last chance for your favorite independent music venue, festivals and promoters.

NIVA has made the process simple and easy. All you have to do is click on SaveOurStages which opens to a pre-written letter that will populate with your Senators and Congressional Representatives based upon your zip code. Your voice is important – save live music today!