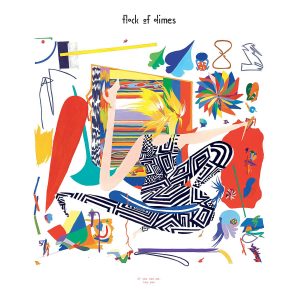 Flock Of Dimes, aka Jenn Wasner (Wye Oak, Dungeonesse), just shared the new track “Everything Is Happening Today” with Rookie Magazine off her forthcoming full-length album If You See Me, Say Yes coming out September 23rd on Partisan Records.

She spoke with Rookie about what’s in a band name, her creative process and the secret to staying young. You can read the entire interview here.

Next week at NYC’s Le Poisson Rouge, Wasner will guest at composer William Brittelle’s LPR set (co-director of New Amsterdam Records) to debut a live version of “Everything Is Happening Today” backed by the String Orchestra of Brooklyn.
If You See Me, Say Yes is a blend of electro-acoustic pop powered by Wasner’s unmistakable, stop-you-in-your-tracks vocals. It’s the culmination of 10+ years of experimentation with her craft, from the songwriting to the melodies, lush synths, and the entire Flock Of Dimes creative aesthetic.
Wasner kicks off a headlining fall tour as Flock Of Dimes this September with opening act Your Friend. The tour includes a set at Trans Pecos festival in Marfa and a collaborative performance in Berlin alongside Bon Iver, Damien Rice, and 60+ other artists.

To learn more about Flock Of Dimes and pre-order the album, visit her website: http://www.flockofdimes.com/

See video for “Semaphore” from Flock of Dimes debut LP, If You See Me, Say Yes below!