An extensive U.S. tour will begin April 2023, with European dates to follow.

In celebration of the release, Merchant will embark upon a US tour this spring, going into the fall (schedule below); European dates will be announced shortly. Keep Your Courage is available to preorder here.

Merchant writes in her album’s liner notes, “The songs contained within this album were written and recorded during the global pandemic that began in the winter of 2019 and is in its fifth wave as I write, in the autumn of 2022. It has been, and continues to be, a period of great flux and fear on every level: global, national, communal, familial, personal. But this is not an album about the coronavirus or the chaos it caused. For the most part, this is an album about the human heart.” She continues, “The word ‘courage’ has its root in the Latin word for heart, cor, and we see it over and over in many languages: le coeur, il cuore, o coração, el corazón. This is a song cycle that maps the journey of a courageous heart.”

Over her forty-year career Natalie Merchant has attained a place among America’s most respected recording artists. She has earned a reputation for being a songwriter of quality and a captivating stage performer and has distinguished herself as a social justice and environmental activist. Merchant began her musical career as the lead vocalist and lyricist of the pop music band 10,000 Maniacs and released one platinum, two double-platinum, and one triple-platinum records with the group: The Wishing Chair (1985), In My Tribe (1987), Blind Man’s Zoo (1989), Hope Chest (1990), Our Time in Eden (1992), and 10,000 Maniacs MTV Unplugged (1993). Merchant left the group in 1994 and has subsequently released nine albums as a solo artist with combined sales of seven million copies: Tigerlily (1995), Ophelia (1998), Natalie Merchant Live (1999), Motherland (2001), The House Carpenter’s Daughter (2003), Leave Your Sleep (2010), Natalie Merchant (2014), Paradise Is There (2015), and Butterfly (2017).

Merchant has collaborated with a wide range of artists, including Billy Bragg, Gavin Bryars, David Byrne, The Chieftains, Cowboy Junkies, Philip Glass, Kronos Quartet, Ladysmith Black Mambazo, Mavis Staples, REM, and Wilco. She served on the New York State Council on the Arts from 2007–2011 at the appointment of Governor Elliot Spitzer and was recently appointed to the Board of Trustees of the Library of Congress’ American Folklife Center by New York State Senator and Majority Leader Chuck Schumer. Merchant’s awards include: The Library Lion Award from the New York Public Library (2011), The American Society of Authors Composers & Publishers (ASCAP) Champion Award (2019), and The John Lennon Real Love Award (2019). More information at: The Official Website for Natalie Merchant. 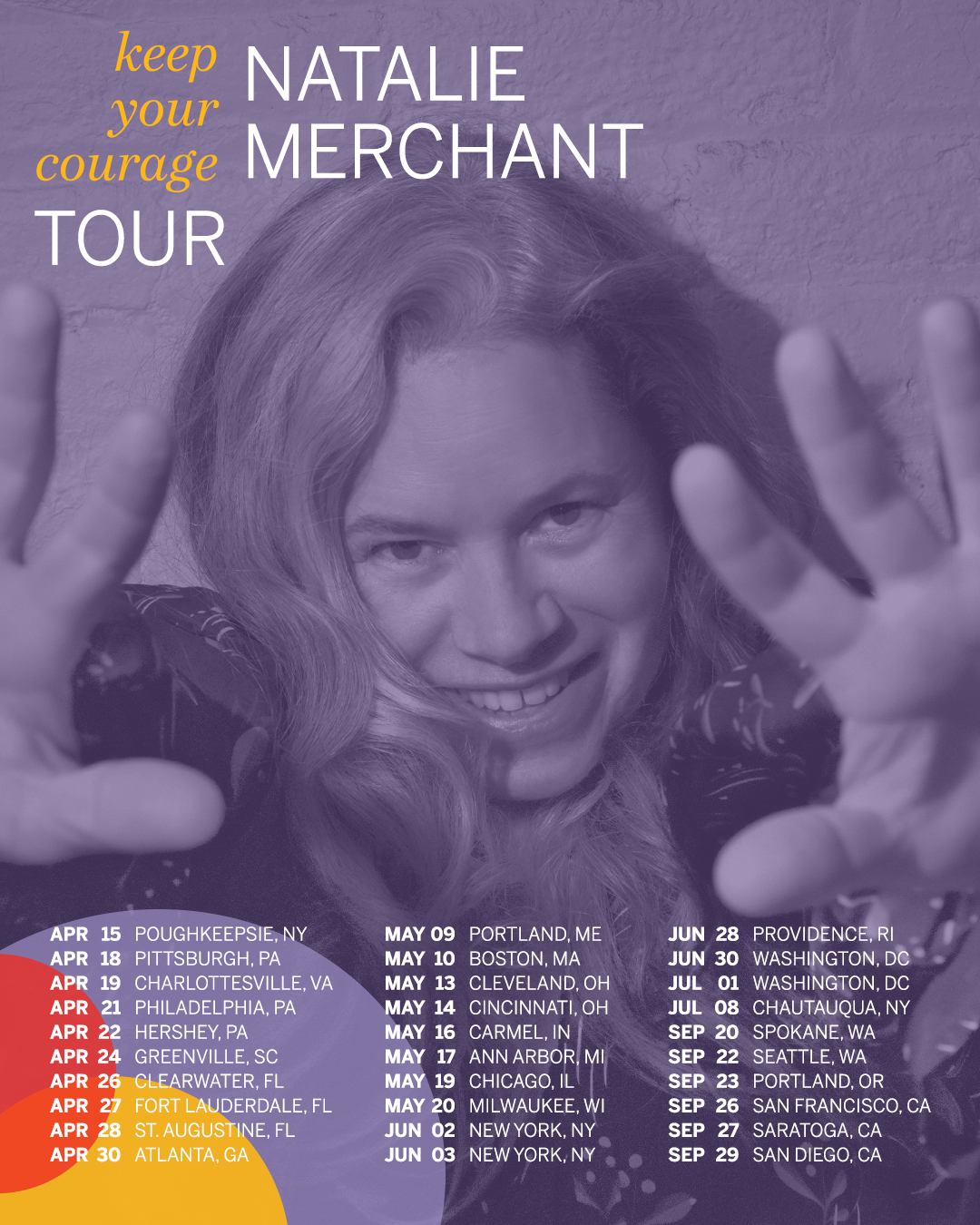