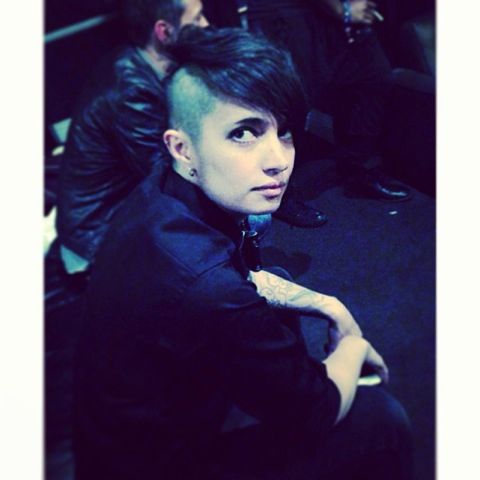 We first met the fabulous Jen Trani at NAMM during the 2014 She Rocks Awards when she played guitar in GRAMMY-award winner (and She Rocks award recipient) Gabriela Moreno’s band. WOW. This girl killed it.

She left such an impression on us that we decided to dig around on the internet to learn more about her. What we discovered didn’t surprise us one bit! Trani is basically an online celebrity guitar teacher, having more than 50 million collective views on her instructional videos for Mahalo.com.

Trani has also had some television appearances as the on-set guitar/band consultant and guitar double for Beverly Hills 90210, and even played on a CBS commercial for the season finale of The Amazing Race.

Her genuine teaching style makes you feel like she’s right there with you in your living room teaching in person, and her skills are worthy of merit and applause. Learn more about Jen in our interview below and at her website here.

WiMN: You attended Musicians Institute in Los Angeles. When did you attend and graduate?

WiMN: During your studies at M.I., did you notice a large disparity between male and female students? If so, how did you cope?

JT: I was the only female guitar student in my class in the bachelors degree program and in the two certificate programs. I have always been interested in activities that were male dominated. I think I have always considered myself one of the guys so it really wasn’t that big of a deal or anything new for me.

WiMN: Tell us about your new YouTube show Tasty Tracks.

JT: Oh I’m so glad you asked! Tasty Tracks is a new YouTube show that I recently created. It’s kind of like a music review show but with a positive spin. I listen to lots of albums and find my favorite tracks and then make a 5 minute show talking about why I liked the specific track. I wanted to do something where I could share the music/artists that I am excited about but really make it personal. Not just, “Oh here’s a link, so and so is great” post on Facebook. I find that I am much more open to new ideas when I have someone in front of me giving me reasons why they are excited.

WiMN: How did your guitar tutorial videos on Mahalo.com become so popular?

JT: Ya know, I honestly have no idea! Hahaha. I did a handful of of videos for them and was hoping for a couple thousand views total. I checked back three months later and I had over 100,000 hits. I think now I am over 50 million. It’s surreal. My brain can’t really process those kind of numbers with my name attached to it. Hahaha.

WiMN: You’re also a private guitar instructor. What are some of your biggest student success stories?

JT: I have two very young students that I have been working with for years that are starting to make a name for themselves. That’s very exciting to watch them build a fan base and learn more about the business as a possible career.

But for me personally, a success story as a instructor is when a student realizes that they just did something that they swore to me up and down they could never do. Those moments are why I will never stop teaching.

WiMN: Tell us about your gear – what’s currently in your rig?

JT: My main set up is my American Tele and my Egnater Rebel 20 with various pedals. My favorite pedals are my Voodoo Labs Sparkle Drive, holy grail reverb, and a custom distortion with boost that a fan made for me.

But I also like to try add my Fender Mustang, Custom Strat, and Epiphone Dot (with Seymour Duncan jazz blues pick ups) into any sets if it fits the style.

WiMN: What is one of your favorite quotes?

JT: If you want happiness then be happy. 🙂