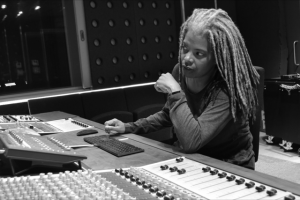 Although it’s the 21st century and things have come a long way, there is still some catching up that needs to be done in order to level the playing field between different genders and backgrounds in the music and audio industry.

One group that is actively working towards promoting a balance is the Diversity & Inclusion Committee that the AES (Audio Engineering Society) has created. Their goal is to address areas such as accessibility, genre diversity, emergent audio fields and gender/race/physical ability-based inclusion as it relates to AES globally and the audio industry overall.

Spearheading this committee is Leslie Gaston-Bird, who in addition to holding other AES executive positions such as VP Western US/Canada, is also a musician, an educator, broadcast technician, audio engineer and audio researcher. She’s now using her diverse background and experiences to benefit the audio industry as a whole and raise awareness for this important mission.

Below, Gaston-Bird shares some thoughts behind her interest in this position, as well as her hopes for the future. To find out more, visit aes.org/community/diversity.

WiMN: You’re a trained pianist and bassist, and an audio engineer, and you’ve also worked in broadcast and taught recording arts, so it’s safe to say you’re fully entrenched in the world of music! What inspired you to pursue music and audio as a full-time career?

LGB: I began playing piano at a young age, perhaps six or eight, and I am classically trained. My father was a touring musician and my mother played piano, too. When I was growing up, I also loved seeing how things work. My father owned a reel-to-reel machine and I learned how to thread it as a child in the ’70s. I always loved math and excelled in my first calculus class in college (but don’t ask about the second class!). Actually, it was probably college brochures that introduced me to the field of music technology. I think MTV had a lot to do with it, too. I worked at the university radio station when I studied audio technology at Indiana University, and would see job openings for National Public Radio posted on the internal news system, so I applied and was hired there a few months after graduating. So my first job was as a Broadcast/Recording Technician at NPR headquarters in D.C.

WiMN: Among all your pursuits, are there any favorites, or have you enjoyed them all equally?

LGB: I love playing in bands when I’m not working, it’s a great outlet. But I have also enjoyed studying multichannel audio. I wish there was an inexpensive way for more people to experience surround sound at home. And I’m talking about more than two loudspeakers, not a “sound bar.”

WiMN: What was it like working for public radio? I envision it to be rather formal but also very cool at the same time! Any favorite broadcasts you worked on?

LGB: It was very cool and it was very far from formal! It was laid back and I made friends with many other techs and journalists. I would like to add that at NPR in the early ’90s, half the tech staff were women, and there were maybe over 40% African Americans on the tech staff as well. I’m not sure how the demographics changed since the transition to digital. My favorite broadcast was Morning Edition. Even though I had to be at work at 3:45am, it was a good team and often exciting during breaking news.

I started working in audio post production in 2002, so my focus has been on sound for picture since then.

WiMN: With such a diverse resume, you’ve worked in a variety of scenarios. As a female working in this traditionally male-dominated field, have you ever experienced any gender discrimination anywhere? If so, how did you handle it?

WiMN: That leads us to your current role, as Chair of the Diversity and Inclusion Committee for the AES (the Audio Engineering Society). How did you become involved in this endeavor?

LGB: When I was elected Vice President for the AES Western Region in 2016, it was before the #metoo movement, but there were several posts on social media about women’s experiences in the audio workplace. I wanted to restart the Women in Audio committee, but there was also an interest in having the committee serve underrepresented groups. After a discussion, we decided to form the Diversity and Inclusion Committee.

WiMN: What are some positive outcomes you envision as a result of this committee? Any upcoming programs you can mention?

LGB: So many people have reached out to me with their stories, and I’m convinced that our committee serves a crucial purpose. I suppose the biggest sort of “in-progress achievement” is getting a set of guidelines approved. There are over 40 people on our committee from companies such as Dolby, Apple, and Izotope, mastering engineers, plus other practitioners and educators. We worked collectively on the guidelines to insure there is more visibility for underrepresented groups at our conferences and conventions.

I’m hoping that as we implement these guidelines we will expand and enhance what people experience when they come to an AES event. Also, there are several hashtags we support, such as #audioequitypledge, #amplifydiversity, #balancedaudio and #heforshe.

WiMN: What advice would you give young women looking to pursue a career in any corner of the music and audio field?

LGB: This is a difficult one. It depends on the woman’s individual personality. Is she determined? She probably already knows that she can do whatever she sets her mind to. Is she unsure? Maybe she needs to be connected to a mentor.

But I hope there’s no woman out there who thinks, “I can’t do that, it’s a men’s club.” That type of thinking might seem outdated, but although it’s ingrained in society that “women can do what men can,” I believe there’s a subliminal influence to women’s esteem when they see all-male panels and men predominately featured in trade magazines and websites. There are a lot of women working to change that.

WiMN: In closing, if any of our readers would like to hear some of the music you’ve recorded, where can they go to find it?

LGB: In 2003, for my thesis, I pioneered a form of music video production I call “Music Video Vérité,” for which I record live audio from the band and intercut across locations. As far as I know, I was among the first to do this (if not the first). A link to the video is here. Currently, I work mostly in audio post production, so look for Doc of the Dead on Amazon Prime, Infinity Chamber on Netflix, and the upcoming film A Feral World  (FeralMovie.net).