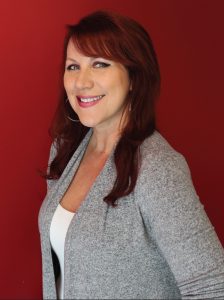 Lisa Foxx is an on-air radio personality who can be heard on 104.3 MYfm in Los Angeles and their sister station, Star 101.3 in San Francisco, on the iHeartRadio network. For the past 25 years, she’s been the voice of many top stations up and down the California coast, starting in college, and rising to fame in the ‘90s in LA where she and Ryan Seacrest tore up the afternoon airwaves on Star 98.7.

When not in the studio or freelancing in talent/booking and music supervising, Lisa can be found at one of the restaurants on Sunset Blvd in which she’s a partner, at a Dodgers or Kings game, exercising, doing charity work, or listening to a very eclectic mix of her favorite music, including Maroon 5, U2, Journey, ‘80s hair bands, Hall & Oates, Katy Perry and many others.

We are delighted to be presenting Lisa Foxx with a 2017 She Rocks Award at the upcoming NAMM Show in January. Find out more about her here.

The WiMN: Radio has boasted some notable, successful female on-air personalities, particularly after the advent of MTV and other supporting broadcast mediums. When was it that you found your calling in radio?

LF: I was actually attracted most to broadcasting in the late 1980’s, because of the honesty, integrity and independence it seemed to offer female news anchors whom I began to look up to on our stations in San Francisco. I began taking TV and Radio Broadcasting courses at Ohlone Junior College in Fremont, California (well known for launching many Bay Area radio careers).

I was on air at the college station, working at restaurants, and interning at stations in San Jose. My original goal was to transfer to SFSU and get my degree there, but crazy enough, I was offered my first on-air job just a few years after graduating high school, so maybe radio was meant to be for me the whole time! I can laugh, be myself, be serious when needed, be honest, and be real.

The WiMN: What’s one of the things you most enjoy about your job?

LF: I most enjoy the opportunity to lift someone’s spirit every day. I remember while in college, one of my teachers asked us to start listening –– really listening –– to the hosts we enjoy. I remember liking many of the fun-sounding men on the radio, but one woman in particular always sounded miserable or like she couldn’t wait to leave or was kind of complaining about something. I remember thinking, ‘she must have the coolest job ever, but sounds so negative.’ So I thought I would try hard to ‘bring the happy’ every day.

People are driving around, going through some heavy stuff these days, and often feel alone. That is something special radio can still offer – a LIVE voice/person who can maybe up lift you, pull you out of the funk, and be there for you. That’s always what I have felt about my relationship with listeners. I strive for that with every break I do.

The WiMN: How do you think iHeartRadio has had a positive impact on the landscape of radio?

LF: I think iHeart Radio and iHeart Media has totally raised the bar on how radio –– and radio personalities –– do everything now. I can’t believe how easy I had it before! Now, because our company is so on the forefront of technology and how it intertwines with the everyday lives of ourselves, our listeners, clients, millennials etc., we’ve had to learn to master the art and power of social networking, blogging, creating our own original web content and staying a step ahead of the rest.

Like a lot of radio hosts from “back in the day,” I was there when we played everything off records, then cartridges and our main news source was the newspaper and the AP News wire because that’s all we had! Times have changed, and if you want to stay a force in the game, you’ve got to be on top of the new way, and embrace change and all the good that can come of it. Did I mention I’ve been Snapchatting this whole time? Ha!

The WiMN: How do you see the environment for women in media these days vs. in years past? Are there more opportunities now, or are the challenges the same?

LF: I’ve definitely seen major changes and improvements over the years. Back in the ‘80s and ‘90s, there were a lot more women in radio who were just “sidekicks,” traffic girls, the news girls, etc. Now, there are so many more women who are actual partners, getting more mic time, many hosting their own shows, and so forth. And many are so much more respected now. It really was another industry years ago with a kind of “Boy’s Town” mentality.

No doubt, I think there’s a better balance of women out in front and behind the scenes these days––more female executives, female CEO’s, bosses, entrepreneurs. It’s an exciting time for a sharp gal who wants to kick butt in the industry, just like the next person.

LF: Oh gosh, so many! A favorite: in the early days, it was tough for [Ryan] Seacrest and me to book big names because it was back in the days when most publicists thought radio was not big enough for their clients. We could rarely get past those gatekeepers, but one night, after seeing one of my favorite bands (The Dan Band) in LA for the 100th time, the singer put the big spotlight on my face and gave me a huge happy birthday shout out from the stage.

After that, Ben Stiller came up to me (I was dying! Ha ha!). As I watched him walk towards me, he said, “Are you Lisa Foxx?” I said, ‘Umm, aren’t you Ben Stiller?!’ He was so sweet, with his wife Christine, and he proceeded to tell me how much they loved our radio show, were big fans and were loving Ryan on Idol (I believe it was during the first season). They mentioned how obsessed they were with Ryan’s hair and asked if I could send an autographed picture for Christine’s brother Brian (of course!). As they gave me an address/info, I braved up and asked Ben if I gave him our hotline number, would he call in to the show. He said “Yes, of course!” He did, and we had an awesome 15 minutes of radio with THE Ben Stiller!

The WiMN: We hear you’re also busy with some new pursuits as well. What can you tell us about your music supervising and consulting roles for film and TV?

LF: Getting into music consulting and music supervising for TV and film has been a long time dream for me to do on the side. There are so many incredibly talented artists who may never make it onto the radio. I see it as another powerful platform to help launch artists, get artists paid, and get them some nice recognition for their gift.

The right placement could be a career game changer for an artist, too. It’s a very tough business to get into, but thankfully––like anything else––the personal relationships you make in this world can open up some exciting doors. I’ve done a few freelance projects over the years, did my first movie (an Indie film that my friends produced) and have been music consulting for A&E’s Emmy award-winning show Intervention. It’s the first time they’ve ever used songs in the episodes. It’s been an exciting challenge, and I’m truly grateful to Michael Branton and the team at GRB. I hope to work on more shows with them.

The WiMN: These days, what would you recommend as a good plan of action for young women looking to pursue a career in broadcast?

LF: I would say the same advice I’ve been giving since I got into this business still applies today. It’s really an “aiming for success in life” philosophy that should work for lots of careers: get that internship in college, get there early/leave late, offer to do more, offer to help in every department, be positive and helpful, take up the slack, don’t complain or throw others under the bus, network without overstepping boundaries, and build healthy relationships.

People open doors for those they like and who have a good work ethic and are trustworthy. All that, a little bit of talent and good timing, and anything can happen! Never drink your own cool aid…the second you think you’re a big deal, you are done! When you are doing well, stay hungry for more and grateful for every day. Oh, and one last thing, they can also check our jobs page at iHeartMedia Jobs – All Jobs for starters, too.  🙂