Front and Center: The Harp Twins, Camille and Kennerly Kitt 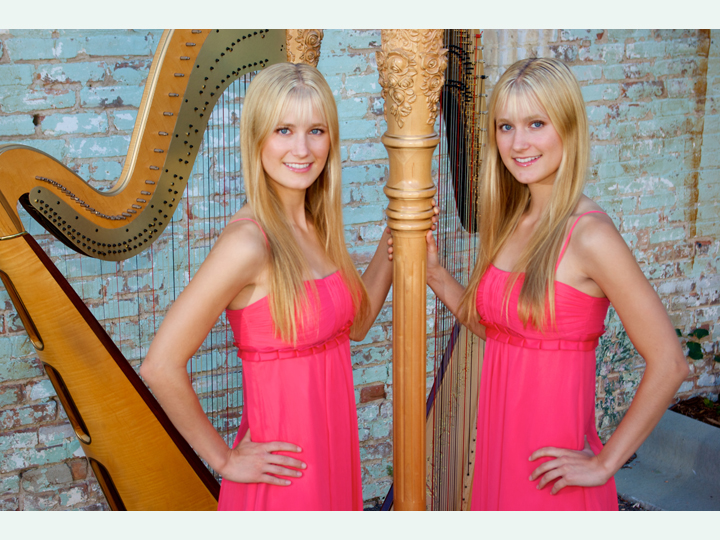 Camille and Kennerly Kitt are American identical twin actresses and electric/acoustic harpists, who compose, arrange, and perform as The Harp Twins. They’re so identical, we can’t tell who’s who! But that’s beside the point, because they’re both spectacular at their craft.

There’s so much more to learn about these fabulous ladies, so read our interview with them below and visit their official website here.

WiMN: You are the most stunningly versatile and talented harpists we’ve ever seen. Simply amazing! Let’s go back to the very beginning: What appeal did such an unconventional instrument – the harp – have for you?

HT: Wow! Thank you for the lovely compliment! The harp always seemed like a magical instrument to us. We didn’t realize that playing the harp could be a reality for us until we started earning the money for a harp ourselves in middle school.

WiMN: How long have you been playing harp for, and do you play other instruments?

HT: We’re classically trained in piano. We also play a little percussion and occasionally sing. We started playing harp in middle school after we had already been playing piano (actually keyboard since our family couldn’t afford a piano) for years. We were both really drawn to the beauty of the harp. It’s always seemed like a magical instrument to us. It actually took us a while to convince our mom that we were serious about learning the harp. We had to prove our sincerity by earning some of the money ourselves. We babysat, walked dogs, and did office work to earn the money for our first pre-owned harps. And the rest is history!

WiMN: What are some great resources for the global harp community?

HT: One of our favorite new resources is Harpsicle Harps! We recently partnered with Harpsicle/Rees Harps to show what can be done with small, affordable harps. This is important to us because most people think that you have to be rich or privileged to play this instrument – they don’t realize that there are resources out there like Harpsicle Harps that provide very affordable, quality instruments. Harpsicle also has self-teaching resources – which is especially wonderful for those who don’t necessarily want to play professionally, but want to pick up an exciting and magical instrument!

WiMN: As twins and fellow musicians, who does what? Composing, arranging, choosing cover tracks, etc.?

HT: We’re actually equally involved in every step of our creative process (and the business side) of our work. We decide together what songs we cover, we compose together, decide the concepts for our videos, etc. It’s a team effort all the way and we’re grateful that we haven’t had any disagreements in our career.

WiMN: Tell us about the most exciting live performance you’ve ever had.

HT: One of our favorite performances would perhaps not appear to be the most “exciting” to most people, but it was performing this summer for the residents at Little Angels – a care facility for children and young adults with severe disabilities and complex medical needs. The residents at Little Angels need 24-hour care, they are confined to wheelchairs, and cannot express themselves verbally. But it was such a wonderful experience for us to bring our music to them. We played our harps for several groups in different parts of the facility and also brought our blue Harpsicle Harps to set on their laps. We helped them individually strum the harps and the joy on their precious faces kept us smiling all day. Those with special needs have always had a special place in our hearts.

WiMN: You’ve been involved in many artistic and athletic endeavors such as music, acting, swimming and even have a third degree black belt in Tae Kwon Do (crazy!). Which of those activities do you hold closest to your heart?

HT: Music definitely holds the spot closest to our hearts. We also love acting and hope to have the opportunity to do more in the future. It’s fun to “become” a different person/character and use our creativity in different ways.

WiMN: What are some covers fans can expect to see you upload on your YouTube channel in the future?

HT: We’re generally rather secretive of our upcoming covers because we love surprising our fans! However, we have a very fun ’70s classic rock cover that has been HIGHLY requested by our fans coming – probably in September. We also have re-recorded and re-filmed one of our early covers and we think our fans will be pleasantly surprised. We’ve spent a lot of time the past few weeks arranging and recording new tracks for our upcoming Harp Attack 2 and Harp Fantasy 2 albums – which include a new Metallica cover and another top requested movie track.

HT: Well every song that we have covered has its own unique challenges. We think the most difficult song that we’ve covered so far is “Dance of Death” (Iron Maiden). Iron Maiden has such long, complex songs, and they have so many inherent challenges to being covered on just 2 harps, with no other instrumentation or backtracks.

WiMN: What is your ultimate goal career-wise?

HT: We would love to continue to grow our fan base worldwide so that we can tour to our fans. Meeting the people who support us is one of our greatest joys as musicians, and we would love to travel to our fans around the world and perform for them. Our ultimate goal is for our radical Duet Harp Revolution to take over the globe! 😉 😉 We believe in lofty dreams. 😉 😉

WiMN: What words of encouragement would you give to a young girl pursuing an instrument that isn’t as ubiquitous in pop culture, such as the harp?

HT: We would encourage other girls to follow their dreams – even if (and especially if) it’s outside the box. We think it is most important to be yourself and no one else. Find your own unique niche that is 100% *you*. Work hard. Then work harder. Never stop. Put in the practice hours because there are no real shortcuts. Find a teacher who not only teaches skills, but who also allows you to love your instrument.

Our first harp teacher was a very negative person and condescending teacher. We knew that we wanted to play duets when we started harp and she didn’t want us to play duets. We felt like the better we got and the harder we worked the more irritated and negative she became. We actually considered quitting harp because we were losing our love for it. However, our mom looked around and found us another teacher who was amazing: she not only let us incorporate duets into our curriculum, but encouraged us to do what we love and follow our musical passions and dreams. She was the polar opposite of our first teacher and really allowed us to become the musicians that we are today. We think it’s extremely important to keep the love for your instrument first and foremost. When we get discouraged we always turn back to why we are doing what we’re doing – we LOVE the harp and we LOVE playing together.

WiMN: Thank you very much!

HT: Thank YOU! We’re honored to be featured on your site. We love that you promote strong and passionate women. <3 <3