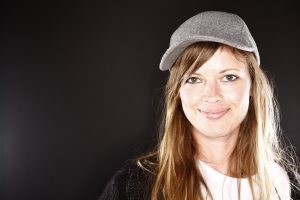 In the music world, there are rock stars, people who support or promote the rock stars, and – every once in a while – people who are a little of both, in their own way. Guitar Center’s Maria Brown fits into that last category. If you ever attended a Guitar Center Drum-Off or King of the Blues competition, watched the Guitar Sessions TV show series, or saw the induction of a drummer into the Guitar Center RockWalk, you’d agree. Brown is one of Guitar Center’s resident “rock stars,” as the driving force behind those and other popular programs across the country.

She recently spoke with us about finding her groove in a career that perfectly suits her, how it almost didn’t happen, and some challenges she met along the way. And, naturally, we asked her to name-drop some of the interesting musician’s she’s had the opportunity to work with!

To find out more, visit guitarcenter.com.

The WiMN: Tell us a little about how you came to your current position at Guitar Center, and how would you describe your current role?

MB: My career at Guitar Center (GC) almost didn’t happen. I was in my early twenties trying to get into nursing school, interning at a music magazine, waiting tables and going to shows 3 to 4 nights a week, when someone recommended me for a spot at GC. I turned down the offer at first but called back a month later to see if it was still open, and I’ve been with GC ever since. My love for music, passion for helping others, and ability to juggle several things at once turned out to be just the right combo for a job at Guitar Center.

I first started as an assistant on the Promotions team, which evolved into event coordinating, artist relations, partnership development, and eventually program management. While at GC, I’ve had the opportunity to do everything from executing contests to pitching sponsorships, programming a radio show, booking talent and venues, developing marketing campaigns, and producing content and artist profile features.

In fact, I’ve had the chance to produce some of GC’s artist empowerment programs – Drum-Off, King of the Blues, and Get Out of the Garage, as well as our artist-driven content series, including the radio show Connections Made by Guitar Center with Nic Harcourt, our podcast & web series At Guitar Center, our TV show Guitar Center Sessions, and artist editorials.

The guiding force behind what I do at Guitar Center is supporting musicians and celebrating music, whether that’s by making it easier for musicians to get their hands on gear, giving them opportunities to further their craft, helping to extend their reach to a bigger audience, or telling their stores in a meaningful way.

The WiMN: Were you involved in music growing up, or did you have any musical influences around you?

MB: Music has always been an ever-present part of my life. I grew up in a house with a piano, took three years of lessons, was in choir, and played flute in our middle-school band. On top of that, music was just always on… tapes, CDs, the radio, MTV. My parents were avid music fans, and a shared enthusiasm and curiosity for exploring music became something I connected and bonded over with other people.

In my early 20s, my best friend at the time – who played guitar – bought me an old 1976 Fender Musicmaster bass. I think he was looking to convert me into a bandmate! We both felt fervor over much of the same music, and he encouraged me to mess around on keyboards with some of his original music. I eventually got a couple of synths of my own and practiced and experimented with his band.

Ever since, I’ve been consistently engaged with music in my life: whether making mixes for others, joining a good friend a few years back for a spell of DJ gigs, or going to concerts (this past Coachella was my 13th year in a row!).

The WiMN: Entertainment marketing and artist relations have traditionally been male-dominated areas until recent years. Have you ever faced challenges being a female in those roles? If so, how did you handle it?

MB: There’s a tendency to assume that women just play the role of an admin type. I think it’s hard for some to grasp the fact that women are capable of leadership roles. I’ve definitely been mistaken for someone’s assistant before on more than one occasion and have politely had to correct that perception.

I’ve also had some experiences with men having a hard time taking direction from women. That’s been jarring at times because it makes you second-guess yourself. I think it’s good advice to try to own what you do. Take pride in it, and have confidence – you have to be your own advocate.

The WiMN: Do you see more opportunities for women in those roles currently, and what do you attribute that to?

MB: It’s been encouraging to see more and more women taking on prominent roles and carving out their own lanes. I think more women are coming together in an ongoing effort to bring the female perspective to the table and more boldly enlighten others to the fact that we have a unique point of view and just as much to offer.

The WiMN: What advice do you have for young women looking to break into our industry in some capacity?

MB: Always be on the lookout for those golden opportunities. Find your voice and use it in a way that resonates. Don’t be afraid to speak up. If you’re not sure what exactly you want to do, start somewhere. Your skills and abilities should guide you, but sometimes, unfortunately, you may have to work even harder to get the same opportunities as your male counterpoints.

I’ve been guided by a spirit of service to the arts. Being able to understand what’s important and valuable to an artist while thinking strategically about how GC can further their musical ambitions has been invaluable to my role on the team. If you are genuinely excited about what you do, that can be infectious.

MB: I have a lot of gratitude for the things I’ve been privileged to work on at GC. One of my favorite things about working on Drum-Off over the years has been being able to do something special for the drum community and honoring drum legends with a Guitar Center RockWalk induction at the show. Each of the ones I’ve worked on (examples: Steve Jordan, Jim Keltner, Steve Ferrone, Clyde Stubblefield & Jabo Starks) have been incredibly rewarding.

Getting the opportunity to first sit down and talk with these artists and dig into their incredible life experiences and careers – then fold that into a script, take the music, photos and videos, and work with our production team to create this tribute to them at the show – has been so much fun and personally rewarding. Then getting to stand on the side of the stage while they take in the recognition they deserve, has been very touching.

The WiMN: Are there any upcoming Guitar Center events our readers may be interested in watching, attending, or participating in?

MB: We’re working on some new content initiatives to get people excited about music. They’ll provide a behind-the-scenes glimpse at what goes into music-making by demystifying the process, digging into the tools for shaping sounds, and recognizing how your environment impacts you creatively. Stay tuned!