Listed as one of the 10 need-to-know new country artists by Rolling Stone in 2017 and one of 15 country artists to watch by Billboard in 2018, singer/songwriter Caroline Jones has exploded onto the country scene since her debut album, Bare Feet. Known for her catchy blend of country and pop, Caroline has won over the hearts of countless fans, with her 2019 smash single “Chasin’ Me” garnering over 7.7 million impressions across streaming platforms. Her latest single, “All of the Boys,” is available for streaming now.

When she is not touring, Caroline hosts the Sirius XM show Art & Soul, where she sits down with musicians from around the world for intimate acoustic performances and conversations about their craft and creating the perfect song.

We spoke to Caroline about her favorite Art & Soul moments, performing with Jimmy Buffett, and her advice for women entering the music industry.

WiMN: Let’s start off by going back to your childhood. How prominent was music in your life growing up? Who were the artists that made you want to pursue a career in music?

CJ: Both of my parents love music. My Dad played a lot of classic rock and classic R&B – The Who, The Temptations, and Earth Wind and Fire. My Mom introduced me to great vocalists like Mariah Carey, Whitney Houston, Celine Dion and Barbra Streisand. So my earliest influences were R&B and pop.

WiMN: Your debut album, Bare Feet, was entirely self-written and you co-produced it. You even played most of the instruments on the album. How has that experience influenced your later projects?

CJ: That creative involvement is just my process and my preference. Production fascinates me. My instrumental fluency is as important to me as any singing, songwriting or any of my other crafts. I simply love all those aspects of creating and recording music. Being involved in every detail in collaboration with a great team (Ric Wake, my co-producer, Gustavo Celis, engineer, and many great musicians) has taught me SO much about all aspects of music and production. The process has made me a better artist for sure.

WiMN: On top of performing, you are also the host of Art & Soul on Sirius XM, where you chat with fellow musicians about songwriting. Could you share some of your favorite pieces of songwriting wisdom you’ve learned from guests?

CJ: What has struck me is how different and diverse each artist’s sensibilities and processes are. Some artists are 9-5 writers in the Nashville style, and some artists prefer to be at the whim of inspiration. Some artists are part of bands or collectives, and some artists are lone wolves. What’s beautiful is to see each artist express him/herself truthfully and uniquely. One of my favorite memories from the show was Steve Cropper teaching me how we interwove writing songs (lyrics and melody) with accompanying guitar hooks in R&B classics like “Sittin’ on the Dock of the Bay,” “Knock on Wood,” and “Midnight Hour.”

WiMN: Your charity duet with Jimmy Buffett, “Breathe In, Breathe Out, Move On,” helped introduce your music to an entirely new audience. How did this project come about?

CJ: It’s actually a live recording from the first show I ever did with Jimmy. He invited me to open the “Trying to Reason” Hurricane Relief Concert in Tallahassee in 2017. I was so honored and excited to be a part of it with Kenny Chesney, Jake Owen, and Toby Keith, let alone join Jimmy onstage for a duet! “Breathe In, Breathe Out, Move On” closed the entire show and I got to share that moment with Jimmy. It’s a song he wrote after Hurricane Katrina, so it was especially relevant that night. It was a once-in-a-lifetime, goosebump moment and I am so happy we were able to share the realtime recording with the world.

WiMN: You were featured on Trisha Yearwood’s “Every Girl on Tour,” which was one of many all-female tours the country world saw in 2019. In your opinion, what does this mean for the future of women in country music?

CJ: Trisha is one of the best live vocalists I’ve ever heard. I absolutely loved being a part of her show. I always feel honored when a headliner gives me the opportunity to perform in front of his/her fans. It’s a huge privilege and one that I never take lightly. In terms of the all-female roster, I think it’s wonderful that women are seeing the talent in other young female acts and giving them a stage platform. I want to see men continue to give that platform to women as well. I have been blessed to have had Kenny Chesney, Zac Brown, Jimmy Buffet and Vince Gill all take me under their wing and introduce me to their audiences.

WiMN: How do you feel about opportunities for women in the music industry in recent years?

CJ: It’s 2020. We must make our own opportunities. It’s about music, not gender. Sure, the system is lopsided right now. But it is evolving. Not just the gender balance, but the entire music industry. My prediction is the industry will be more influenced and controlled by artists in the future. So I try to spend the vast majority of my energy bettering myself, my artistry, and my craft. It is more possible, though perhaps more challenging, than ever to find a niche audience and create your own lane.

CJ: Focus on the music. Focus on the artist that you want to be and the music that you want to make. Don’t be deterred by other’s opinions of you or your product; they don’t know what potential is inside you. Only you do. It’s your dream and your responsibility to nurture it and protect it. Let your passion be the gasoline in your tank. 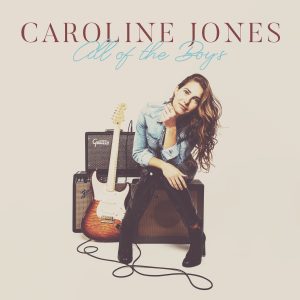 WiMN: Your latest single, “All of the Boys,” is being released alongside several other remixes of the song. What can we expect from each version?

CJ: I love so many different styles of music, so it was fun to create 4 different mixes for my new single “All of the Boys”, which I wrote with my mentor Zac Brown. The country mix features prominent banjo and mandolin, with less heavy drums; The Coffee House mix is completely organic featuring brush drums, upright bass, Rhodes piano and acoustic guitar; The EDM mix by Andrelli is a dream come true for me, a huge dance music fan. The primary album mix is my personal vision for the song’s production.

CJ: I am in the process of writing and recording my next batch of songs, so stay tuned! I will also be headlining my own shows later this year. 🙂