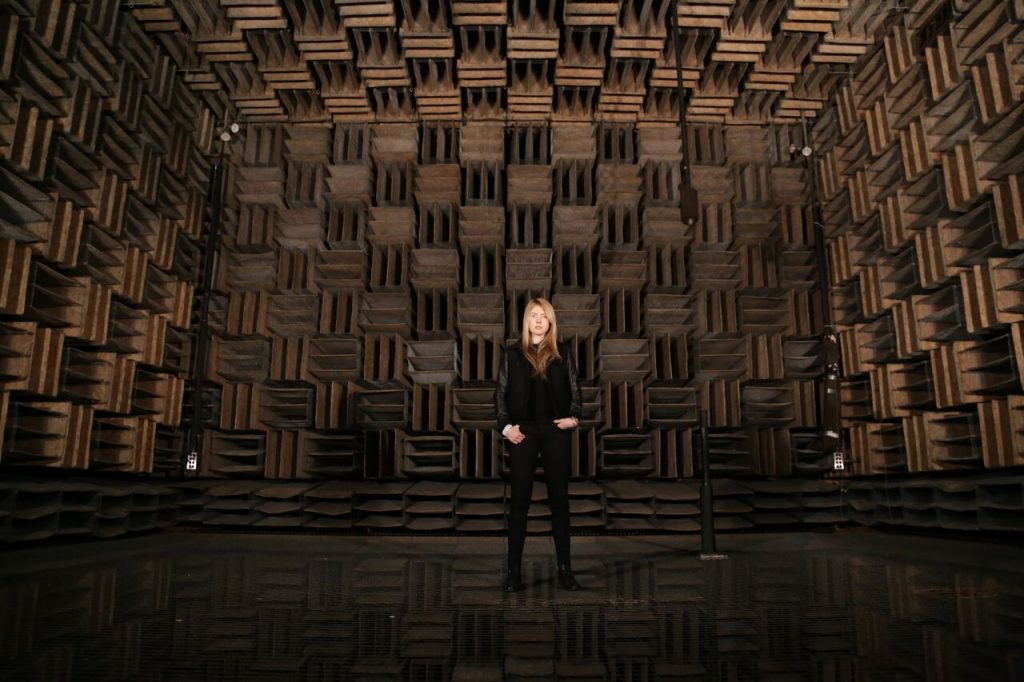 If you’re of a certain age, you can remember being a kid or a young adult purchasing a vinyl album (or many of them!) and spending time studying the album art, reading the liner notes, and getting to know the story behind each song. With the advent of digital, downloadable music, the way in which people consume music changed.

While today’s musical artists still painstakingly explore and address all the fine details of their musical creations, Beatie Wolfe goes one (or maybe 10!) steps further to create fully immersive experiences for listeners that hearken back to the “old days” when buying and listening to a vinyl album was an experience, but with the embellishments of modern day video and audio technology.

Beatie Wolfe is an Anglo-American singer songwriter whose soulful acoustic sound and honest lyrics take cues from the stylings of Leonard Cohen and Elliott Smith. She has received rave reviews and her work has been featured in a multitude of festivals, conferences and notable museums. But what really sets her apart are the out-of-the-box, “world’s first” presentations she conceived and delivered for her albums—in the form of “wearable music,” “3D vinyl,” a live stream album, and a musical deck of cards.

Wolfe’s 2013 album, 8ight, was released as a “3D Vinyl app,” which gave listeners an old-school vinyl album experience, with a modern application. By opening the app, listeners could access liner notes, lyrics, artwork, and of course the music.

Her second album, Montagu Square, was launched in two innovative fashions. First, as an “intelligent deck of cards” (one card for each album track) that were embedded with NFC (Near Field communications) chips so that listeners could tap the cards onto their phone to listen to each song. Wolfe pushed the envelope even further by commissioning legendary tailor Mr. Fish (tailor to Jimi Hendrix, David Bowie and Mick Jagger) to create a “musical album jacket” woven out of her music that could be worn and played by tapping your phone onto the NFC-enabled fabric.

For her 2017 Album, Raw Space, Wolfe teamed up with Nokia Bell Labs to record her songs in their famous anechoic chamber, which once held the Guiness World Record as the “quietest room on Earth.” She then collaborated with Nokia Bell Labs and design company Design I/O to launch the album via the world’s first live 360-degree augmented reality live stream that put the viewer in the center of an immersive sensory experience. The stream ran for seven days, and viewers saw a turntable in the anechoic chamber playing the album, while AR animations filled the room, which could be seen in a 360-degree video.

Parallel to her critically-acclaimed endeavors as a musical pioneer, Beatie also advanced a study about music and dementia, something close to her heart. She recently took some time in between U.S. music dates to share her thoughts about her pursuit to immerse listeners in a musical world, and her music-based research about the power of music as medicine as well.

WiMN: Please share some of your early background with the arts, and how you came to know that you wanted to make music your full-time pursuit.

BW: I started writing songs when I was seven. Since I was a small kid, I was always completely obsessed with all forms of storytelling. Then I discovered I could put my stories to music, and that felt like pure magic to me. I would spend hours poring over my mum’s record collection, reading the vinyls like musical books and entering into the world of each album in my mind, imagining what worlds I could create for mine. Music was the language that made sense to me and writing songs just felt like the most natural thing to do. It didn’t really feel like a choice, but something I had to do.

WiMN: Your music has been described by the press as “timeless,” “captivating,” “beautiful and profound.” What was your inspiration for writing in the style that you do? Any favorite songs you’d recommend to our readers who are just starting to explore your music?

BW: I don’t really think of it as writing in a style; it evolved naturally from working with the tools I had (my voice, abilities on guitar and piano, songwriting) and what I had to say. I started playing piano when I was very small and so initially my songs were written on the keyboard I had in my living room, and then around 13/14 I picked up the guitar and that became the main instrument I’d write on.

When writing a song, I am always intensely aware of telling the story as authentically as possible and then building the arrangement and instrumentation around that. So that process of building each song from the inside out is key to me. Two songs that are very close to my heart are “Little Moth,” a tribute to singer songwriter Elliott Smith, and “Need Somebody”, a song I wrote about my Power of Music & Dementia project. And for contrast, “Broken Bird” has a little of that Blood Sugar Sex Magik raw energy that made me want to make an album when I first heard it (age 8). You can watch “Little Moth in Live 360 with real-time AR here.

WiMN: Your albums 8ight, Montagu Square, and Raw Space were physically executed with a fantastic blend of modern technology and a nostalgic look back at when owning a record album was an experience, not just a download. Aside from the immense critical acclaim from the press, how did it feel to be a pioneer in creating these “world’s first” album concepts?

BW: It felt amazing but also like the most obvious thing to me! I was actually surprised to find that not everyone was doing it. Really everything I do on the tech/innovation side is to remind people of the magic of music, and to create that vinyl experience but for the digital age with all the album’s artwork, story and ceremony brought back into the listening experience, but in a new way.

When I see people being transported back to their love of the album (and of music!) it brings me immense joy — it’s really why I do everything. Music is such a powerful thing that goes way beyond just entertainment and is something core to our humanity, so it can’t just be background all the time. It deserves a deeper experience too.

WiMN: To come up with new ideas, some people network; others spend purposeful time doing research or meditation; and some have a chance encounter or a dream that inspires them. What was the creative force that led you to come up with such unique executions for your recent albums?

BW: I have been thinking about what my albums could look and feel like since I was eight years old. I have been imagining the worlds I could create for my records since that time because I fell in love with the tangible gateway, the story, the sense of ceremony that albums had for me growing up, which provided the perfect platform for the music to be delivered. I spent all my time listening to albums, buying them, reading them, writing songs, or creating artwork…it was all interconnected.

So when I grew up and it was time for my first record to be released—and the digital had replaced the tangible—I couldn’t have my first album exist solely as a download; it wasn’t an option. Everything I’ve done began from those early experiences I had as a kid, and every innovation I’ve created really has the same idea at its core: how to create a vinyl experience for today. Knowing “why” really drives everything because you know what to pull in when inspiration strikes and what to discard, based on whether it rings true with that central intention. Then the executions, even though they may seem wildly different, all have the same energy driving them.

WiMN: In addition to the music industry, the technology sector is sometimes an area where women face discrimination. Have you ever had to face such challenges in pursuit of your ideas and career? If so, how did you handle them?

BW: Honestly I can’t say that I have or if I have I haven’t been aware of it. I was very lucky to realize early on that the music industry presented many pitfalls for a young artist and when I had offers that didn’t feel right I just couldn’t take them, even though that was just not done at the time. I could never compromise on what being an artist means to me—that is to possess a clarity of vision, an authenticity of voice and a purity of intention. So because I circumvented the traditional approach, I had the freedom to build my work the way I wanted to and pick like-minded collaborators who inspire me, which include Design I/O, tailor Mr Fish, and Nokia Bell Labs.

WiMN: You’ve led some music-based, philanthropic research projects focusing on dementia and other afflictions. Please share a little about that and how it started.

BW: I was inspired by neurologist Oliver Sacks and his incredible work looking at the power of music to heal and move us, even when nothing else can. While reading Musicophilia, I felt that there was no greater application of music than that: pulling people out of these extreme neurological conditions, as powerfully as any medicine, and when I heard that some of my family members had developed dementia, I felt compelled to start applying what I’d been reading about.

What began with friends and family then developed into a research tour: Power of Music & Dementia, which was later adopted by the Alzheimer’s Association and Stanford. The unique thing about Power of Music & Dementia is that it was the first study to prove the power of music, outside of memory, for people living with dementia. As Sacks says, “Music imprints deeper on the brain than any other human experience,” and “Music does not have to be familiar to exert its emotional pull.”

WiMN: Any upcoming projects our readers can look forward to?

BW: The V&A Museum in London has invited me to do a major exhibition of my albums this September titled “The Art of Music: a series of world-first designs by Beatie Wolfe,” which will be the first time my albums have been presented alongside each other.