Front and Center: Pianist and Singer-Songwriter of Photocomfort, Justine Bowe

Having played their first live show this past year, the indie rock trio (comprised of Justine Bowe, Gabe Goodman, and Will Radin), Photocomfort, is on the rise. Bowe, the lead vocalist, songwriter, and pianist for Photocomfort, is ready to take center stage and venture into the crazy world that is the music industry. 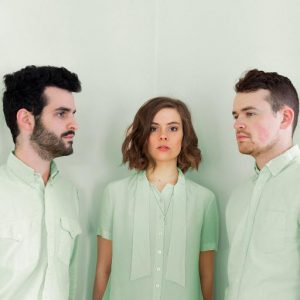 Bowe recently spoke with The WiMN about her favorite things about playing live shows, recording and releasing a new sound, her love for Jenny Lewis, and the best advice she’s ever received. Tune in below for the full interview, and check out Photocomfort’s official website, Facebook, Instagram, and Twitter accounts.

WiMN: What was it like to open for Zella Day in Cambridge, Mass.?

JB: Opening for Zella Day at the Sinclair in Cambridge, Mass. was surreal for us – almost to the level of hilarity. We had never played a show before, and were just tinkering on some songs at our practice space when we got the call asking if we’d like to open up for a sold-out crowd at one of our favorite venues.

All we had wanted to achieve as a goal with our first show was to just get through the set without any major issues. But the Zella Day experience delivered so much more for us, and the crowd was incredible. The weirdest thing was that some folks had come out to see us, which, though I’ve been touring with other bands for years, was the first time to happen for my work. Pretty special.

WiMN: Tell us about Photocomfort’s debut single, “Not Love.” It’s a more electronic/80s-influenced sound than tracks that you and bandmate Gabe Goodman had previously released.

JB: Our single, “Not Love,” was kind of a fun foray into synth pop with some punch. It is definitely the most pop-friendly thing we’ve produced, which is a direction we wanted to explore. So, it’s different from our roots, which are more folk and rock influenced, but we always want to push ourselves to try new things.

The tune we released after that, called “Slowdance,” is definitely a lot truer to our usual form. We’re an unsigned band, so there’s no one telling us what we can and can’t do, what we can and can’t release. We want the tunes that we release to reflect our dynamic interests. Music should be fun to create, but it should also be an intellectual challenge. That’s what we try to convey.

WiMN: What methods have you found work best for your songwriting sessions?

JB: Generally either Gabe and I will come to the table, or in most cases, an email, with some sort of idea that we think is promising or interesting. That idea could be a verse, a chorus, a beat, a few chords – it totally varies. But the most important thing for us is that we’ve figured out a work flow that works for us as individuals and as a team – if we’re working on a tune on the computer and get stuck, we move to acoustic instruments, and vise versa.

The general rule for our songs, though, is that they have to stand up for themselves if we play them acoustically without any fancy production or frills. That rule keeps the songs, the content, and the concepts as the heart of the project, not just the production or the instrumentation.

WiMN: At what moment did you realize you wanted to pursue a career in music?

JB: I didn’t start writing songs until I was seventeen or so. Until then, I had always been a lover of music, and always fell in with a musical crowd. I would have to say at that time there weren’t a lot of cool contemporary stuff for me to turn to and see front women owning the craft of writing and performance.

I think discovering Jenny Lewis changed things for me. Up until then, the ladies I was listening to were from the past, like Joan Baez and Jefferson Airplane. But Jenny was out there making an impact on the scene, and I suppose that’s when I saw myself up there, too. So, I dyed my hair red. Not a good look for me.

WiMN: What do you enjoy doing in your down time?

JB: Nothing makes me happier than hanging out with a group of my buddies and watching a movie. Or baking cookies. Or going for a run around Brighton. Or getting coffee with my parents. But that whole time, I’m usually like, “I should be writing songs…” And then I shut myself up in my room for a while.

WiMN: When did you start playing piano?

JB: I started playing piano when I was probably 7 or 8 years old. The experience was so classic – it was from an old lady who lived up the street, who made me sing while I played, and who gave recitals in her living room. The structure of that didn’t really work for my rebellious stage, which I think lasted until a couple years ago.

What made a real difference for me was taking a few lessons with teachers who saw that even though I had trouble reading music, I was really engaged by improvisational work. One of those teachers even wrote out the score for the first song I ever wrote – I oughta try and find that.

WiMN: What’s the best advice someone has given to you regarding the music industry?

JB: TURN AND RUN – I didn’t take it though. The best advice, which I’m still trying to take into account, is to play a bunch of shows, and to say yes to opportunities. To get comfortable on stage, and to figure out who you’re going to be up there… I’m still figuring that out.

WiMN: Which musicians have inspired you and influenced your sound?

JB: I’ve got a lot of love for some 60s and 70s folk stuff, like early Bob Dylan, Leonard Cohen, Simon & Garfunkel. After that I got into a big Radiohead phase, which of course I haven’t left, as well as The National and Grizzly Bear. All are pretty accessible, yet inventive stuff.

JB: My favorite part about playing live shows is the feeling of completing the circle of song creation. Bringing something from an inspired idea, to a whole song, to a recorded and released product, and then playing that song for people (who hopefully like it!) is the most gratifying conclusion to a lot of really hard work.