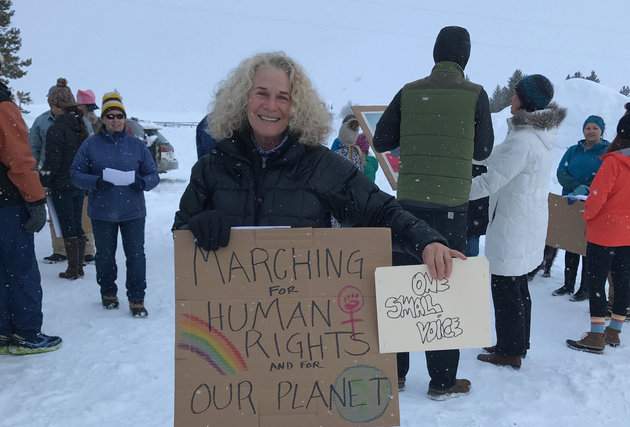 Carole King, one of the most celebrated and iconic singer/songwriters of all time is sharing a new version of her song “One Small Voice”, which she first wrote back in 1982.  This idea was inspired after marching in a snowstorm, carrying a hand made sign that said, “One Small Voice” on Jan 21st in the tiny Idaho town Stanley, near her home. She has penned a note about “Why I’m Just Now Re-Releasing a Song I First Wrote in 1982” which can be read here.

“I’m making the updated recording of ‘One Small Voice’ available to everyone because it will take the strength and persistence of many small voices to overcome the lies of the loudest voice with our message of truth, dignity, and decency.”, Carole says.

Listen to “One Small Voice” on Soundcloud here.

Carole King wrote her first no.1 hit, “Will You Love Me Tomorrow” for the Shirelles at the age of 17 with then husband, Gerry Goffin. They would go on to write several chart topping songs throughout the 1960s. The multi-award winning artist was inducted into the Songwriters Hall of Fame in 1987.  Both her and Goffin were inducted into the Rock and Roll Hall of Fame in 1990. Her accolades did not stop there, receiving the BMI Icon Award and an Honorary Doctorate from Berklee College of Music in 2012, and one year later became the first woman to be awarded the Library of Congress Gershwin Prize for Popular Song, which was presented to her by President Barack Obama. Presently, King is actively involved with environmental organizations in support of wilderness preservation.

Watch her video for “One Small Voice” below! Carole King and half the town of Stanley, Idaho (pop. 63) came out in a snowstorm to march in peace and solidarity with men, women, and children on seven continents. Photos by Gary Gadwa & Elissa Kline.