On Friday, January 20, 2017, the fifth annual She Rocks Awards rolled into the Anaheim Hilton hotel and rocked the night, inducting this year’s honorees, showcasing the talents of many female rockers, and placing female role models in the spotlight. The star-studded evening was streamed by Parade magazine, and also featured a silent auction, with part of the proceeds benefiting Soundgirls, an organization that trains young women for the audio industry.

More than 800 guests were treated to a number of memorable performances throughout the evening. Brandy Robinson, winner of the #SaveAGuitar contest sponsored by Breedlove, kicked off the evening with her soulful guitar and vocal stylings. Next, Jenna Paone, She Rocks founder Laura B. Whitmore and house band Rock Sugah, delivered a fist-pumping performance of an original song by Paone and Whitmore, titled “I Like It Loud,” with guitar solos by Gretchen Menn and Nita Strauss.

FOX KTTV anchor Christine Devine and Daisy Rock Girl Guitars CEO Tish Ciravolo co-hosted the evening and helped WiMN founder Laura B. Whitmore announce this year’s honorees, who were inducted by a who’s who from the world of music and media. Here’s how it went down: 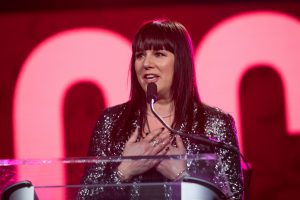 Later in the evening, the Command Sisters played a rousing version of Ronnie Spector’s “Be My Baby,” which was an audience favorite.  Lita Ford tore down the house during the evening’s finale, singing her top hit, “Kiss Me Deadly,” along with rockers from the She Rocks Vol. 1 CD that debuted that night. 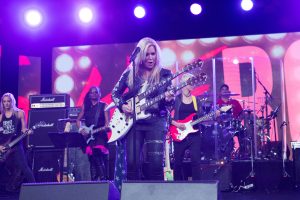 The spirit of the evening and all that the WiMN and She Rocks Awards embody can be summed up by a portion of honoree Shirley Manson’s speech, in which she said, “By not disappearing, but by thriving, that’s how you have the last word.”

Many top name journalists attended the She Rocks Awards, so be sure to check out all of the great stories, memories, photos and social media highlights in the weeks ahead!