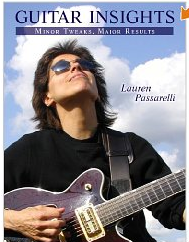 In the book, Passarelli shares guitar insights equally useful for any level guitar player. From choosing a guitar or a teacher, to demystifying the often unspoken details that some advanced players do naturally and other players have never heard of.

Passarelli was the first woman to graduate from Berklee College of Music as a guitar performance major in 1982, and became Berklee’s first female guitar instructor in 1984.

Purchase the book here, and visit her YouTube channel here.