Women’s Audio Mission (WAM), a San Francisco Bay Area-based nonprofit dedicated to advancing women in music production and the recording arts, is celebrating 15 years of training over 12,000 women and girls in the recording arts with a benefit concert at Brava Theater on September 21, 2018. The concert will feature performances by R&B/pop artists, St. Beauty, currently touring with Janelle Monáe, and Mexican American singer/songwriter Diana Gameros, as well as a cocktail reception with a DJ set by Chulita Vinyl Club.

The event is a fundraiser for WAM’s training programs, which reach the Bay Area’s most vulnerable communities (96% are low income, 91% are girls of color). Funds generated will help WAM reach their goal of training 3,000 women/girls in the recording arts by 2020 in San Francisco and Oakland, as well as expand services to underserved artists in WAM’s recording studio, the only one in the world built and run entirely by women. WAM’s 15 Year Anniversary party will feature a live auction, live performances, pre and post-concert receptions, and a special meet-and-greet with the performers for VIP ticket holders.

“WAM is beyond excited to celebrate our 15 year anniversary with our amazing community of supporters and powerhouse artists, St. Beauty and Diana Gameros,” said Terri Winston, Executive Director and Founder of WAM. “Last year, our sold-out fundraising event at Dolby Laboratories with the legendary drummer Sheila E. raised over $170,000 for WAM, allowing us to permanently secure our location in San Francisco. We’re hoping to see the same kind of success at our 15thanniversary event this year.”

St. Beauty is part of the renowned artistic collective, Wondaland Art Society, which boasts artists like Janelle Monáe and Jidenna on its roster, and their music was recently featured on the HBO hit show, Insecure. Diana Gameros has quickly caught the attention of national media – her latest album, Arullo, recorded at WAM, was covered by Billboard, Mother Jones, NPR, and more. Learn more about the event and purchase tickets here: Women’s Audio Mission 15 Year Anniversary. 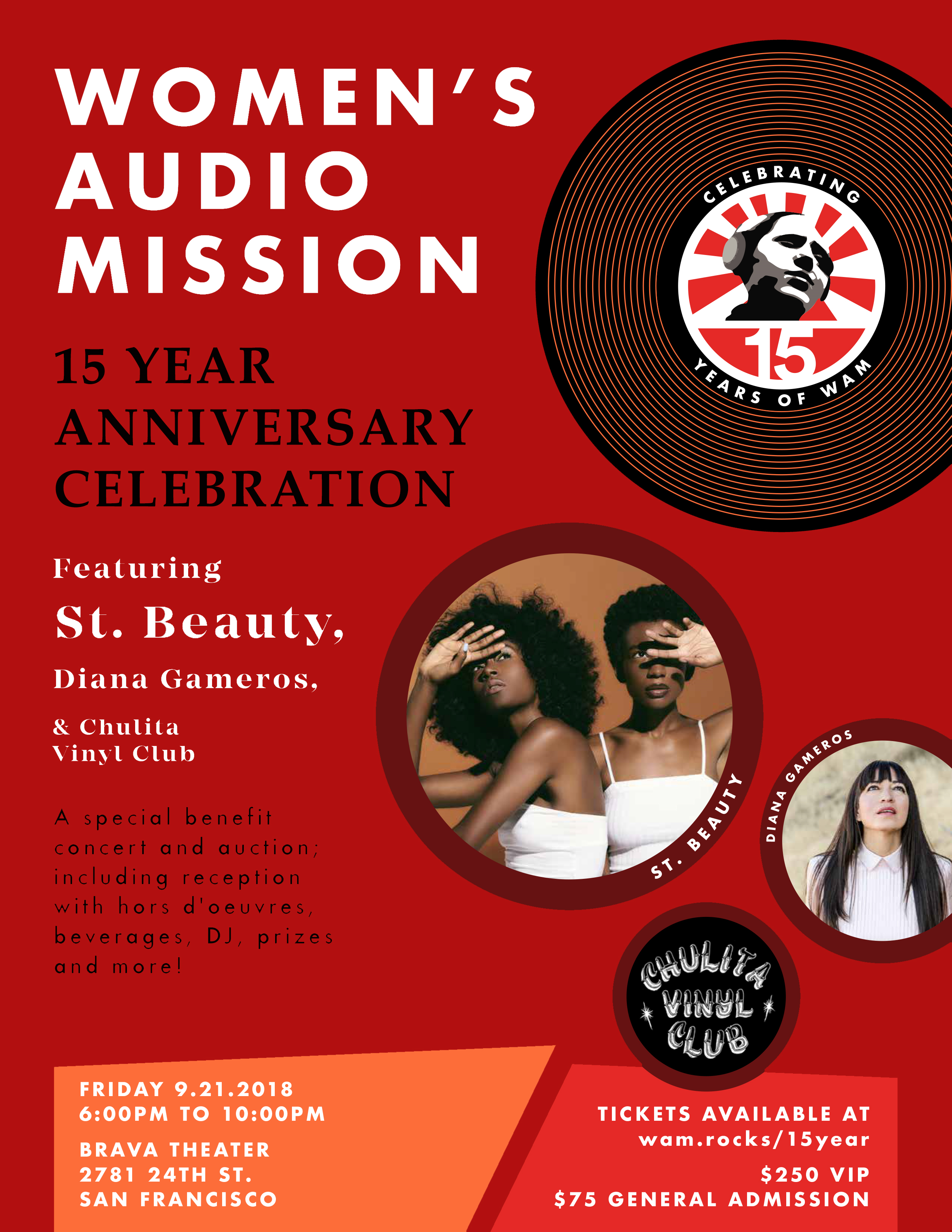 About Women’s Audio Mission
Women’s Audio Mission is a San Francisco based non-profit organization dedicated to the advancement of women in music production and the recording arts. In a field where women are critically underrepresented (less than 5%), WAM seeks to “change the face of sound” by providing hands-on training, experience, career counseling and job placement to women and girls in media technology for music, radio, film, television and the Internet. WAM believes that women’s mastery of music technology and inclusion in the production process will expand the vision and voice of media and popular culture. For more information, visit www.womensaudiomission.org.