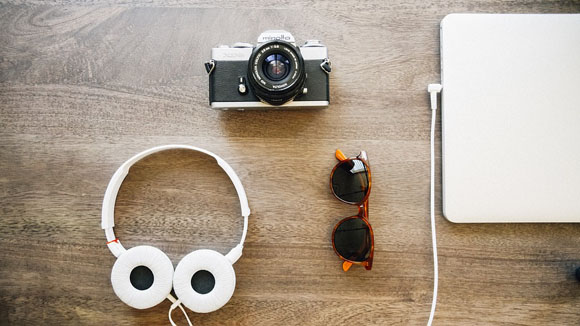 One of the most important things artists tend to overlook as they carve out their careers is the creation of their image. As superficial as it might seem, an artist’s image and smart, cohesive branding plays a big role in achieving success.

In a social media-dominated world, potential fans often come across your image before even hearing one of your songs, and a profile picture or Instagram post might be the thing standing in the way of getting more listeners. With resources like social media sites and apps, easy website builders, and graphic design tools, it’s not only possible—but necessary—for artists to begin building their brand. Creating your brand might seem a bit daunting at first, especially if the thought of selling yourself doesn’t seem all that punk rock, but it’s important nonetheless. Good branding reveals the artist’s style, interests, personality and aligns with their music, beliefs, and overall message. Whether its album covers, profile photos, website bios or merchandise, it’s important that artists establish a recognizable, interesting image with which to align themselves.

This is where traditional advertising comes into play — ensuring you have good promo photos, eye-catching album designs, and memorable logos. These factors will always be important, but in today’s digital media landscape, artists have the ability to go beyond the typical tropes of advertising and have some fun with branding. No matter what the product, consumption doesn’t happen in a vacuum. It’s part of a larger culture and people use brands to construct their identities. This couldn’t be more true with music, and social media is a great tool to construct your own identity, as well as see how consumers react to your image.

Nowadays, branding is more about connecting with your fans in a unique way than it is about slogans and logos. Social media allows artists to reach out to consumers in a more authentic, engaging manner, eliciting strong emotional reactions that will ensure fan loyalty. From a large scale to small, cohesive branding is important for all artists. Let’s take a look at three musicians that are killing it right now with their artist branding.

In anticipation of her new album Melodrama, the moody tones of the album’s watercolour style imagery is already recognizable as distinctly Lorde. The photo appears across all main social platforms: Facebook, Twitter, Instagram. Each platform has its own purpose, with Facebook and Instagram offering a balanced mix of artsy glam shots and more personal posts like photos with friends or selfies. Personal posts are great for engagement. For example, a photo of a tattoo had fans commenting and sharing photos of their own tattoos on the page. Twitter hosts a number of tweets highlighting the singer’s witty, sincere personality and creates an authentic brand that allows fans to connect with her in a way they couldn’t do by simply listening to her music.

An important thing to note here is that just because an artist is branding themselves, doesn’t necessarily mean the identity constructed through that brand is fake. I have no doubts that Lorde is just as witty in person, but she has mastered the art of translating her personality onto an accessible, digital platform.

can we do this forever please and thankyou pic.twitter.com/thwxNjN5u5

FKA Twigs’ branding is flawless, and frankly I could stare at her Instagram and website forever. Her brand is all about capturing her art, both visually and sonically. She even worked on a campaign with Nike featuring captivating choreography and stunning cinematography that made it feel more like a music video and less like a commercial.

The caption on one of these videos says the goal is “to marry an athletic and spiritual ethos.” The few personal posts she has show her working out and doing yoga, proving that she practices what she preaches. Her website greets viewers with a bombardment of images that express her unique style. The seamless integration of art into her branding is what makes her stand out from other artists, and will continue to draw in new fans.

‘i practice everyday, everyday i practice’ @paletacalmquality styled by @matthew_josephs

Not everyone has access to the same resources as bigger artists, so I wanted to include a mid-size artist who is working just as hard on her image. Toronto singer-songwriter Brooklyn Doran keeps her Instagram strong with engaging personal posts and identifiable imagery. The lead up to the release of her EP These Paper Wings included teaser clips and lyric videos that each had warm tones, beautiful outdoor shots, and the same bold outfit (bonus points: she wore the outfit the night of the release show).

These images, along with a cute bee logo, led the way to a successful release. Following the release show, Doran continued to keep up her personal posts to engage with followers using the same warm tones in her images and showing off her quirky personality including selfies on tour, record stores, and bunnies. While not everything always has to do with music, she shares a ton of content that fans could easily relate to. Her Instagram bio, “music. love. folk & hustle,” sums it up pretty perfectly.

Bluestreak Records in PTBO is now stocking my record #ThesePaperWings! 🚀 You can still grab a copy at one of my upcoming shows! 💥💥💥 3.4 – Peterborough 3.5 – Uxbridge visit brooklyndoran.com for deets

Cassandra is a photographer/writer based in Toronto, Ontario. Her focus lies in concert photography, music journalism, and publicity. She’s currently studying Communications at York University, shooting for Canadian Beats, and programming a local indie music festival. Her passion for the arts has led her along a number of paths including songwriting, musicals, event planning, and of course photography. Follow her work at cassandrapopescu.com.