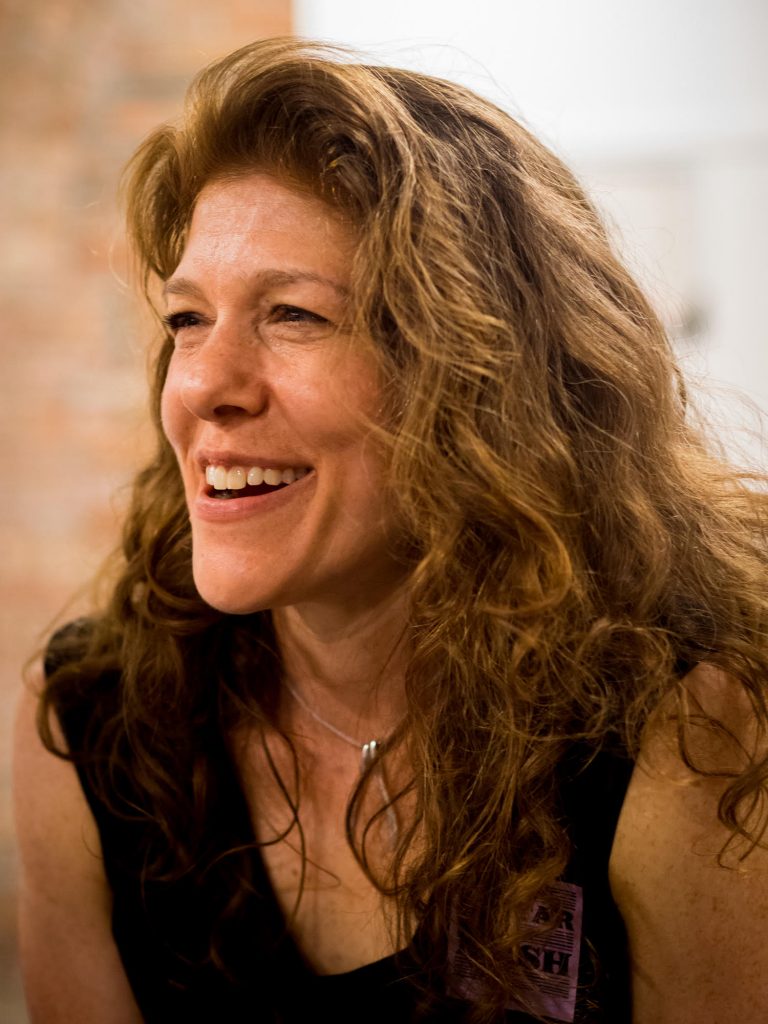 Today we’re thrilled to chat with Rebecca Weller, one of the founders of Guitar Mash.

This unique event offers communal jamming, teen programs, intimate interactions with artists and more, and is open to musicians of all ages and levels.

Singer-songwriter Dar Williams has praised the program, saying, “Guitar Mash is really done perfectly. Music for music’s sake and participation for participation’s sake are very valuable to the world.”

Below, Weller—a musician and producer herself—discusses launching this event, its growth over the years, and its future. Visit guitarmash.org to find out more.

WiMN: How did you come up with the idea of Guitar Mash? What is the mission of the event?

RW: I started playing piano very early, where I studied classical music and practiced a couple hours every day. When I was around eight, my father took me to the South Street Seaport to see Pete Seeger. I remember Pete standing with his banjo with the tall ships behind him playing “Michael Row Your Boat Ashore,” and everyone around me, total strangers, singing altogether. It was the first time I experienced music like that. The idea that music could be a communal thing — instead of the solitary thing I did in a room practicing the piano — was totally new and exciting to me.

So I think that was formative. And in fact, throughout my career, my focus has been on creating participatory experiences. It’s just always been thrilling to me, whether I’ve worked in music, dance or food. I believe that the context created for the audience — and the opportunity to take part — is as critical to their experience as what’s happening on stage. The interaction between the two is powerful for the audience member and it’s powerful for the artist too.

I came up with the idea for Guitar Mash in 2012, when my 13 year old’s guitar trio was disbanding because the other guitarists were joining other bands. He didn’t have a band to join and lost interest in playing and studying… the social component was gone, so I had a personal reason to think about how to engage kids in music. I started focusing on the guitar as a natural connector. Most everyone has played one for even a short time in their lifetime (or thought about playing) and it’s what is held at a campfire to get everyone connecting. Portable, democratic.

WiMN: How is it different from other guitar and music-focused events? What exactly is an Urban Campfire?

RW: Sometimes I want to add a tagline “Guitar Mash: It’s not about the guitar,” Because really, the guitar is the vehicle — it’s not the point of Guitar Mash. There are events and festivals out there celebrating the guitar and celebrating great and innovative guitarists. Although we feature world-class guitarists and singer-songwriters, we are less focused on them as performers and more focused on them as communicators, sharing the songs and stories that have shaped them. Our goal is to cultivate artists as inspiring instigators and to cultivate audience members as collaborators and partners, rather than as fans or sycophants.

Our campfires are proverbial. . . we use that metaphor because it’s a parallel people easily grasp. When you join around a campfire, you don’t care about what the person next to you thinks about your “performance” or how good you are — you’re not really thinking about anything except the fire and the song. Participation in the musical experience is the common denominator.

WiMN: The event started off as a pretty small operation. Can you describe how it’s grown over the years?

RW: Our team has always been lean and mean. I started this (and continue to run it) as a volunteer, with a friend from high school who came from the theater world and loved to create and produce. She has now segued to a council position, and two years ago we hired a producer who has helped enormously in realizing the work we’re doing with teens and in fundraising. Honestly, the operation is still pretty small. To enable more growth, we’ve been meeting with foundations and companies who understand our mission and understand that our audiences are a great market for them, active and creative, exactly what’s needed to counteract the isolation of the digital age.

WiMN: Tell us about some of the team members involved in putting on Guitar Mash — there are a few well-known names. How did they get involved?

RW: Our first event was in 2012 — an Urban Campfire in a Soho loft for 60 guitarists and music lovers. I was looking for someone to lead the group and a producer friend suggested a guy who had just led a parade of trombones down a street in the East Village. Mark Stewart and I met for coffee and it was only then that I learned that he also happened to be Paul Simon’s longtime music director and guitarist, a founding member of the Bang on a Can All-Stars AND an instrument builder! I also learned that communal music and singing together was something Mark did as a very young child with his family growing up in Wisconsin. He has hootenanny in his blood. He is a pied piper for our age.

From day one, Guitar Mash has had a council of people who wanted to help our mission fly and we continue to meet on a regular basis. Some of these people also played guitar and loved the idea of getting together to jam with each other and with the well-known artists we were curating. Among the first ambassadors of Guitar Mash when we launched was the chef Tom Colicchio and the drummer Chad Smith of the Red Hot Chili Peppers. I knew — from mutual friends — that they each played guitar as hobbyists, in addition to their day jobs. They were good “poster children” for the cause — it was important to let the public know that you don’t need to be a professional to come play out. 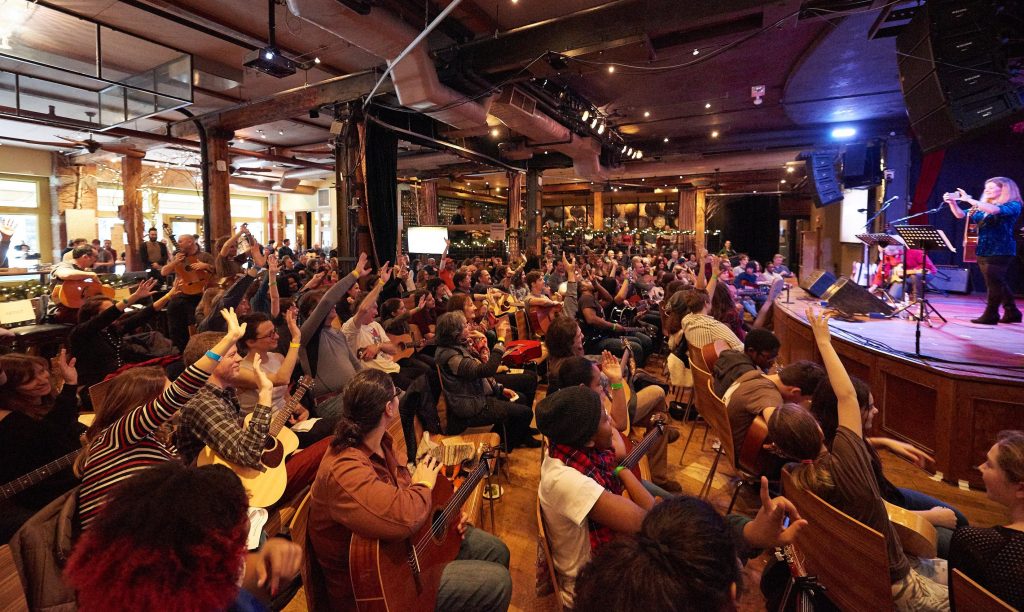 WiMN: What kind of activities and performances can attendees expect?

RW: Each year brings new opportunities and events. We did a Brooklyn campfire at BRIC (producer of Celebrate Bklyn) at their Open Festival last year, and we’ve done a Mash in Woodstock in collaboration with Levon Helm’s Barn. We just returned from producing a big Urban Campfire at the City Winery in Nashville. Our signature event is our fall Urban Campfire at City Winery NYC, which will take place on Sunday, November 18. The fall Mash typically includes an auction of musical experiences and guitars, and now includes Mash Musical Speed Dating, which people seem to love. It’s 3 minutes with different guitarists, of different genres, and you get to play with them and learn from them in private mini master classes.

In addition to these events, we run a free monthly Teen Songwriter Circle in New York, and this summer will be launching our second annual Teen Songwriting Contest in collaboration with the Mayor’s Office of Media and Entertainment.

WiMN: As a woman, has there ever been a time where you felt discriminated in your field? If so, how did you overcome it?

RW: I was “raised” by some great women when I was first starting out producing at Lincoln Center: the head of Special Projects, the head of Development, and the head of Programming — the areas I reported to throughout my time there — all were led by strong and accomplished women. So I had great role models. Tough, but great.

I sometimes feel a little odd-woman out, like when I walked around the NAMM conference for the first time this year. There’s a lot of testosterone in the room. Given that the guitar has traditionally been a male-oriented instrument — built by males, strung by males, and played by many more males than females — I deal with a lot of men in the business and do at times feel that I need to work a little harder to be taken seriously. I overcome it by working a little harder…. and by keeping the focus of the message on the desire to create communal experiences for all, and to tap into everyone’s creative capacity, regardless of their gender, or their age, or their race — the things that can often divide people.

And finally, I’m so heartened at Guitar Mash to see the number of girls and young women — and gender fluid kids — playing guitar and uke and writing their own songs. I hope the next anthem for our time, and we need one, comes from someone other than a man.

WiMN: Do you have any advice for young women looking to break into the music industry or event planning?

RW: I’m sure I did nothing right when I was starting out, but I do think I made a good decision in starting to work immediately after college as opposed to applying to Grad school in arts administration. And I remain an ardent supporter of learning on the job. Volunteer, intern… and be generous with your time. It’s free school! A great way in for young people now is to find an organization that you are passionate about and offer services in social media — draft copy, create graphics, try to make their YouTube channel more effective. You learn a tremendous amount about a company when you’re working on its social and you’re a huge asset since that is the frontline of communication for many organizations that are run by digital non-natives. From work in marketing, you can segue to other areas that might interest you.

WiMN: What’s next for Guitar Mash?

RW: In addition to continuing our activities for teens and presenting our signature event in NY this fall, we are contemplating more national events, and to growing the Urban Campfire on a larger scale in New York City. I am also really interested in exploring how to “pass the torch,” to inspire people and provide tools for them to lead their own “urban campfires.” We’d like to see them burning all around the world.