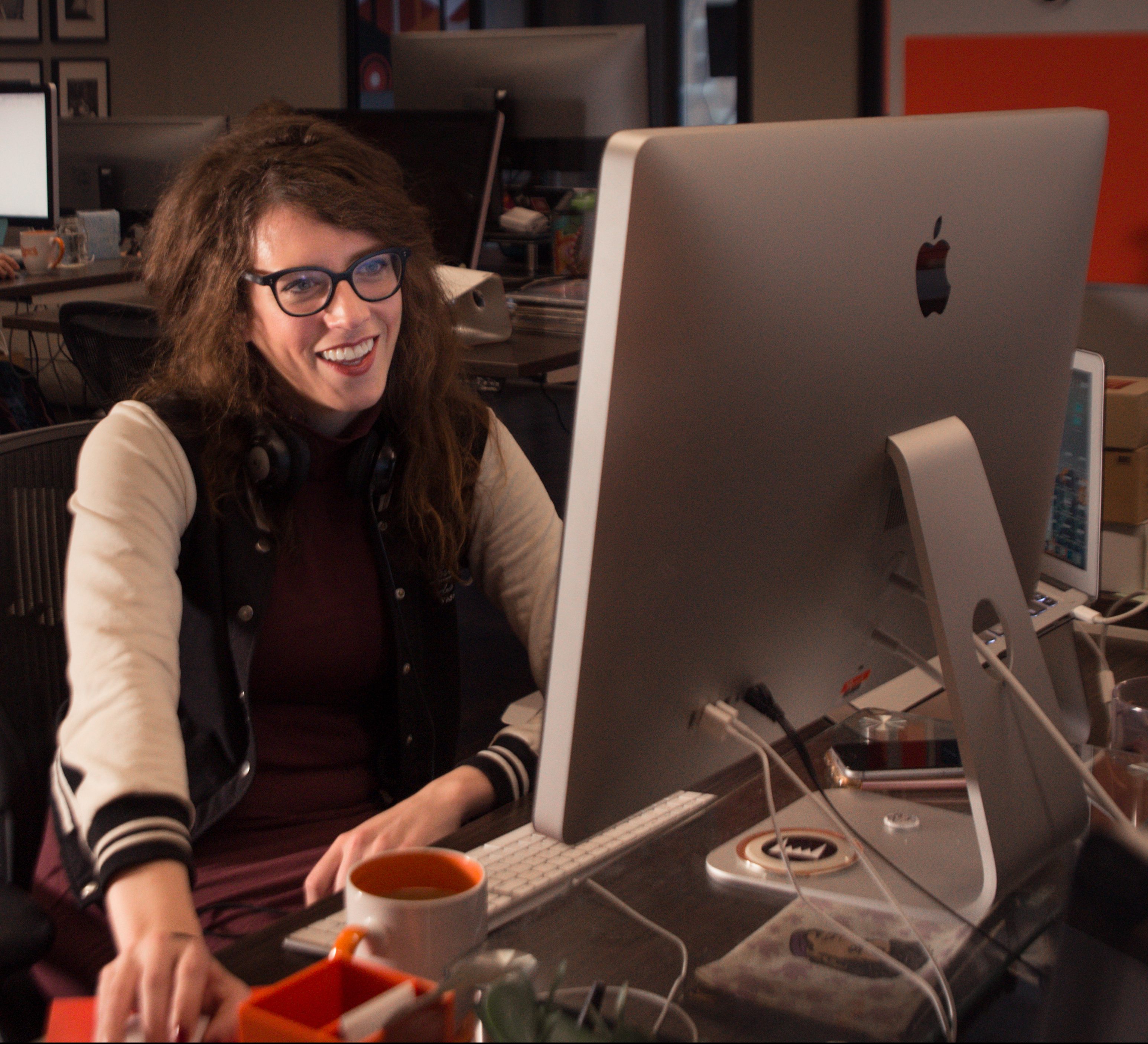 Social media is currently the number one method used to find out about the latest trends, news, film, and music. The top four apps currently used are Facebook, Twitter, Youtube,  and Instagram, with billions of users each month.  Top businesses know the importance of utilizing social media to grow their audience and their profits – like Reverb.com. Reverb is the world’s most popular music marketplace, providing an online platform for musicians to find the perfect music gear, or to sell their own. And when Mallory Nees became their Social Media Manager, Reverb saw a tremendous growth in their social media followers, especially among women.

Mallory Nees is literally the voice of Reverb, posting daily to their social media channels, which have a combined more than 1.5 million followers. Since taking over Reverb’s social media accounts in 2017, her efforts have nearly quadrupled engagement among females on Facebook. One of her proudest moments was sharing a video of Theremin Player Carolina Eyck, which not only spiked Reverb’s engagement but also scored Eyck an invite to play a show with Steve Vai. And back in January, Nees gave a keynote about social media at NAMM (5 Things You’re Doing Wrong On Social Media) which was one of the highest attended talks in NAMM history.

Mallory Nees shares with the WiMN her tips on succeeding in social media, when she changed her career from acting to music, and how she got out of her own way and began believing in her ability to dominate as a woman in the music industry.

WiMN: How long have you been with Reverb, and what has your experience been like thus far? How has your work impacted the growth and success of Reverb?

MN: I’ll be celebrating my 3 year anniversary at Reverb in April. I started as a customer engagement rep, answering musicians’ questions about instruments they found on the site and helping them find their dream gear. A friendly and knowledgeable customer support team is the unsung hero of any successful company, and ours is one of the best. After about a year, I had the opportunity to apply for Social Media Coordinator. Although I didn’t have any formal marketing experience, I received a ton of encouragement from everyone around me at Reverb, so I ignored my inner critic and applied. My personal goal as a marketer day one has been to inspire people to embrace their musicianship. Our continuous growth—especially among historically underserved player demographics—has been a constant reminder that I’m on the right track. In fact, in my first year in this position, our engagement amongst females on Facebook increased by nearly 20%, and it’s been growing steadily since then.

WiMN: You recently spoke as a keynote on social media at NAMM, which resulted in being their highest attended talks ever. How was that experience for you, and why do you think the draw was so massive?

MN: It was wild. First, the incredible turnout was a testament to the respect that Reverb has earned within the industry over the past few years. Even though we’ve only been around since 2013, we’ve grown quickly and a portion of our success can be attributed to the time and attention we put into our videos, written content, social media, and other marketing channels. We love that dealers, manufacturers, musicians, and more look to us for marketing expertise. Beyond that, people are very aware that social media is vital when it comes to acquiring new audiences and staying relevant. I was happy to share some of the knowledge I’ve acquired with such a welcoming and diverse crowd.

WiMN: Would you care to share some of your methods in successful social media posting?

MN: There are so many tidbits that make a social media profile successful, but there are definitely some big-picture ideas that I use as guideposts:

Don’t be afraid of change. Platform algorithms and features are updated all the time. Sometimes it’s frustrating, but if you’re open-minded and ready to adapt, you’ll have so much more success…and fun.

Be a good follower. Social media is meant to be social. If you’re spending all your time refreshing your own profile to see how many likes you’re getting, you’re missing out. Follow pages of brands, influencers, artists, and shops you admire…and interact! Remember: every time you comment on someone else’s post, their audience is that much more likely to get curious about you.

Embrace diversity. Speak to the audience you have, but also to the audience you’re hoping attract. Someone is much more likely to feel comfortable on your page if they already see themselves or their interests represented in your posts. Spread the love, share the microphone, and be the change.

WiMN: Do you have a background in music? Do you play any instruments?

MN: I am the definition of “jack of all trades, master of none” when it comes to playing music. I do have some formal training: I took classical piano and voice lessons and played French horn in grade school band. My dad also taught me to play guitar when I was pretty young. I still have those skills, but I’ve really developed a passion for learning to play new instruments. Since college, I’ve experimented with synthesizers, violin, bass, ukulele, flute, concertina…with varying degrees of success. Next on my list: nyckelharpa.

WiMN: How have you used your influence as a woman in the music industry to help others realize their vision?

MN: My primary goal is to encourage curiosity and exploration. The internet has a reputation for being cynical, but in reality, so much positive and inspiring content exists online—particularly when it comes to music. One of my favorite things to do is discover and share videos of incredible musicians that people might not know yet. Last year, I shared a video created by German thereminist Carolina Eyck that absolutely floored me. It quickly became Reverb’s most-viewed video of 2018. Beyond that, Carolina gained 3,000+ followers that week, and was even contacted to perform with Steve Vai as a result of the much-deserved attention she received from Reverb’s reshare. Moments like that give me so much joy, and it underpins the artists’ drive to continue creating, pushing boundaries, and making the world more musical. Which is something we all really need right now.

WiMN: Would you care to share a little known fact about yourself?

MN: I can play music on a turkey baster, and have won awards for this ridiculous skill.

WiMN: When did you first pursue acting, and what as come from your degree?

MN: I’ve loved acting ever since I was cast as Peter Rabbit in a 2nd-grade school play, and that love lasted through grade school and high school and, eventually, landed me at an elite conservatory program at DePaul University in Chicago. Every waking moment of my college life was spent being a creative collaborator, thinking about the human condition, and celebrating the imagination. I was really active in the Chicago theater and film community for a long time after graduating, but started gravitating toward music more and more—whether that meant scoring films and musicals, acting as a music director, or writing and performing as a solo artist. I wouldn’t exchange those experiences for anything. The skills that I learned as an acting major and a working artist come in handy daily in social media. Only now I don’t have to put on a costume and makeup to speak to a large audience.

WiMN: Lastly, do you have any advice you wish to share with women who are looking to pursue a career in social media influencing and public speaking?

MN: The world is changing, and women are being elevated, amplified, and heard more and more frequently. In spite of the progress, I know that I (and plenty of my female role models) have struggled with imposter syndrome. I have certainly felt like I am unqualified. Or that my successes were the result of pure luck. Or that I have to hide my shortcomings to be respected. Battling the doubt is exhausting, and the sooner you can find ways to reframe that negativity, the better. You are where you are because you earned it. Period. Failing or asking for help when you need it are not signs of weakness. It’s how humans learn and grow. To quote Miley Cyrus when she was a guest judge on RuPaul’s Drag Race: “No one sees themselves in perfection, because nobody’s perfect.” Well said, Miley. Embrace your best, most imperfect self, and you’re already two steps ahead.