“You are a living, beautiful, walking miracle.”

This is how Howie Mandel described 12 year old Grace VanderWaal after her first performance of her original song on Season 11 of America’s Got Talent. And I had to agree, because when I saw her perform it brought tears to my eyes. With just her ukulele and her vocals I could sense her innocence and charm with every word she sang. Her song choice was an original tune that Grace wrote herself titled, “I Don’t Know My Name” with lyrics that shot straight to my heart with profound earnest, from a unique, powerful voice in a rather mature arrangement: 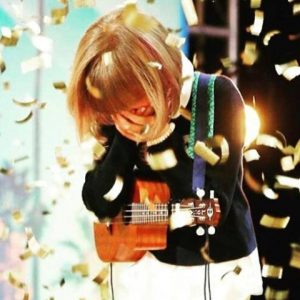 I am lost trying to get found

In an ocean of people

I don’t know my name

I don’t play by the rules of the game

So you say I’m not trying

But I’m just trying to find my way

I was so moved watching this young, polite, beautiful girl her tell a personal story of growth and change.  Grace’s performance was so incredible that not only did she receive a standing ovation from everyone including the judges, but also the Golden Buzzer from Howie Mandel sending her straight to the finals. This, too brought even more tears to my eyes as I witness true talent being recognized with her family running onstage to congratulate Grace who, herself was overwhelmed with genuine shock and joy. You can see her performance here.

The buzz was heard all over and Grace found her Twitter account flooded with shout-outs from famous celebrities like Reese Witherspoon, Katy Perry, Ellen DeGeneres, and even Jason Mraz who offered to collaborate with her via phone call. Taylor Swift sent her a huge bouquet of flowers.

Grace started writing music at the tender age of three. Her Youtube channel is filled with originals about self discovery, bullying, and finding courage whenever we lose hope. When she debuted America’s Got Talent, it was the first time she had ever performed in front of so many people. In fact, when Simon Cowell asked her if her school friends were supportive she responded, “most of my friends don’t even know I sing.”  Even more amazing is that Grace had learned to play the ukulele for only a year before appearing on AGT. Part of Grace’s strength derives from the incredible support from her parents and her 15 year old sister Olivia, with whom Grace considers her best friend.

Grace would go on to win the $1 million on AGT and was then signed to the same label as Adele and Beyoncé proving that miracles do happen and that a young, talented girl from Suffern, New York can make it in the Big Apple.